58 years ago this Monday, the headline on the front-page of the July 6, 1957 Liverpool Evening Express read “MERSEYSIDE SIZZLES.” England was in the 10th day of a heat wave that had enveloped all of Europe. The day before it reached 98 degrees in Vienna and a staggering 125 degrees in Prague. The headline proved prophetic because that day was the first meeting of two Liverpool teenagers who would change the world: John Lennon and Paul McCartney.
On that fateful Saturday afternoon John Lennon’s “skiffle” band, “The Quarrymen” performed at St Peter’s Church in Liverpool. The church fair featured booths selling crafts, cakes, carnival games, police dog demonstrations, and a parade culminating with the crowning of the Rose Queen. The first parade truck carried the Queen and her court. The second truck carried John Lennon and his Quarrymen.
The band was asked to play and sing while the truck slowly lurched its way down the street. When the bumpy ride prohibited the standing band’s ability to play coherently, Lennon sat on the edge of the truck, his legs dangling over the edge, as he dutifully played his guitar and sang for the curbside crowd.
Eventually the trucks came to a stop and the Quarrymen’s first set took place on a molten hot stage in a shadeless field behind the church. 16-year-old John Lennon was the undisputed leader of the band. Even though his guitar skills were rough and he often forgot the lyrics to the songs he was performing, he covered it well by ad-libbing his own lyrics. Midway through that first set, 15-year-old Paul McCartney arrived and watched, transfixed, as John held the crowd with his charm and swagger.
The band’s second set took place that evening inside the Grand Dance Hal at St. Peter’s church. Admission to the 8 p.m. show was two shillings (about 10 ¢). After setting up their equipment to play, bass player Ivan Vaughan introduced the band to one of his classmates, Paul McCartney. It was 6.48 pm on July 6 1957 and the older, cocksure Lennon sat slouched on a folding chair. When Ivan introduced Paul to John, the two didn’t shake hands, they just nodded warily at one another. Ivan arranged the meeting but recalled that Paul wasn’t going to go until he was informed that it was a good place to pick up girls. At first Ivan thought he’d made a mistake as the two hardly spoke to each another. But Paul, who Lennon himself often described as precocious and wise far beyond his years, was determined to make a good impression.

Paul, sharply dressed in a white, silver flecked jacket and black stovepipe pants with a guitar strapped to his back, whipped out the guitar and began playing Eddie Cochran’s “Twenty Flight Rock” followed by Gene Vincent’s “Be Bop A Lula” before launching into a medley of Little Richard songs. Lennon was floored by the demonstration. McCartney sealed the deal by tuning Lennon’s guitar and writing out the chords and lyrics to some of the songs he’d just played.
After the Quarrymen’s show the group invited McCartney to come along to a local pub where they lied about their ages to get served. For Lennon it must have been a dilemma to invite the talented youngster into the fold as a possible challenge to his own superiority within the group. Lennon, even then a savvy businessman, realized that McCartney’s addition might mean the difference between success and failure. Two weeks later Paul joined the band.
In a 1995 interview, McCartney recalled: “I remember coming into the fete and seeing all the sideshows. And also hearing all this great music wafting in from this little Tannoy system. It was John and the band. I remember I was amazed and thought, ‘Oh great’, because I was obviously into the music. I remember John singing a song called Come Go With Me. He’d heard it on the radio. He didn’t really know the verses, but he knew the chorus. The rest he just made up himself. I just thought, ‘Well, he looks good, he’s singing well and he seems like a great lead singer to me.’ Of course, he had his glasses off, so he really looked suave. I remember John was good. He was really the only outstanding member, all the rest kind of slipped away.”
Lennon was equally impressed with McCartney’s instant ease in playing and singing songs that the Quarrymen worked long and hard to learn. McCartney remembered, “I also knocked around on the backstage piano and that would have been ‘A Whole Lot Of Shakin’ by Jerry Lee. That’s when I remember John leaning over, contributing a deft right hand in the upper octaves and surprising me with his beery breath. It’s not that I was shocked, it’s just that I remember this particular detail.” Yes, at that historic first meeting, 16-year-old John Lennon was drunk.
In his 1964 introduction to bandmate Lennon’s first book, “In His Own Write”, McCartney recalled: “At Woolton village fete I met him. I was a fat schoolboy and, as he leaned an arm on my shoulder, I realized he was drunk…We went on to become teenage pals.” More recently, Paul recalled: “There was a guy up on the stage wearing a checked shirt, looking pretty good singing a song I loved, the Del-Vikings’ Come Go With Me. He was filling in with blues lines, I thought that was good, and he was singing well. He was a little afternoon-pissed, leaning over my shoulder breathing boozily.”
Pessimists may assume that John and Paul would eventually have met on some other day had that hot and humid Saturday introduction 58 years ago never happened. But despite their mutual passion for music, the two lads lived in different neighborhoods, went to different schools and were nearly two years apart in age. All recalcitrant intentions aside, ‘Imagine’ if John Lennon had never become a Beatle. ‘Imagine’ if the band that changed pop culture forever had never existed. Fate is a funny thing. Encounters like this are often the stuff of legend; primarily unwitnessed, unobserved, and unrecorded thereby making them unprovable. 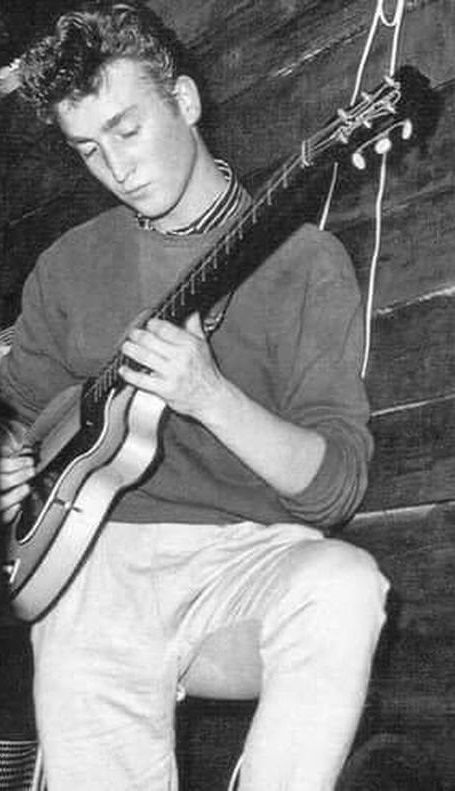 But wait, there is proof. That July 6, 1957 Quarrymen’s set was recorded by a member of St Peter’s Youth Club, Bob Molyneux, on his portable Grundig reel-to-reel tape recorder. Made just moments after that historic meeting, it remains the earliest known recording of Lennon. The three-inch reel includes Lennon’s performances of two songs; “Puttin’ on the Style,” a No. 1 hit at the time for Lonnie Donegan, and “Baby Let’s Play House,” an Arthur Gunter song made popular by Elvis Presley. In 1965 Lennon used a line from the Gunter song – “I’d rather see you dead, little girl, than to be with another man”- as the opening line of his own “Run for Your Life”. In 1963, Molyneux offered the tape to Lennon, through Ringo Starr. But Lennon never responded, so Molyneux put the tape in a vault.
In 1994 Molyneux, then a retired policeman, rediscovered the tape and contacted Sotheby’s auction house. The tape, along with the portable Grundig TK8 tape machine that made it, was sold on September 15, 1994 at Sotheby’s for £78,500 (Roughly $ 730,000 US) to EMI records. EMI considered using the recording as part of their Beatles Anthology project, but chose not to as the sound quality was substandard. It was recorded with a hand-held microphone in a cavernous church hall with a high, arched ceiling and a hard floor. EMI decided that although it was an incredibly important recording made on a historic day, the poor sound quality made it unsuitable for commercial release.
The two Beatles never forgot the friend who brought them together. Ivan had first met John when he was three and the two boy’s shared adjoining backyards. Years later, Ivan recalled, “One wet morning, John appeared on my doorstep clutching his Dinky toys, looking to make friends. And we did, going on to play cowboys and Indians in the fields and cricket in the park.” Paul and Ivan were born in the same city (Liverpool) on the same day (June 18, 1942).
For a time the Beatles put Ivan on the payroll of Apple records, in charge of a plan that never took off to set up a school with a Sixties, hippie-style education theme. Ivan’s wife Jan, a French teacher, was hired to sit down with Lennon and McCartney and help with the French lyrics to the 1965 classic “Michelle.” In 1977 Ivan was diagnosed with Parkinson’s Disease and spent the next 15 years working on a search for a cure. During those years Ivan and Jan often spent the evening’s out with Paul and his wife Linda in London restaurants. Ivan died in 1993. His death upset Paul so much that he started writing poetry again.
In 2002, Paul wrote the book “Blackbird Singing: Poems and Lyrics, 1965-1999″ in which he honored his old friend with a poem titled, Ivan: ” Two doors open, On the eighteenth of June, Two Babies born, On the same day, In Liverpool, One was Ivan, The other – me. We met in adolescence, And did the deeds, They dared us do, Jive with Ive, The ace on the bass, He introduced to me, At Woolton fete, A pal or two, And so we did, A classic scholar he, A rocking roller me, As firm as friends could be, Cranlock naval, Cranlock pie, A tear is rolling, Down my eye, On the sixteenth of August, Nineteen ninety-three, One door closed.” And it all started 58 years ago: July 6, 1957.