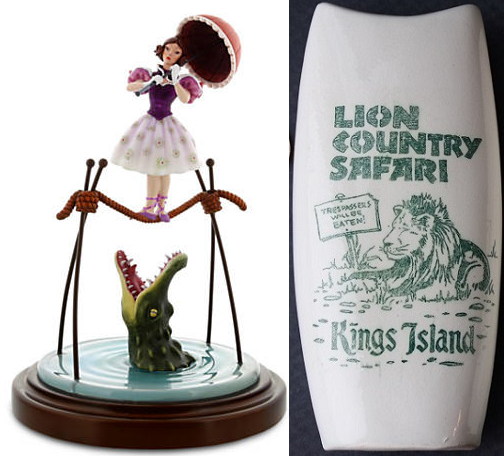 It should come as no surprise to you that I have an affinity for Disney’s Haunted Mansion. I’ve been fortunate enough to have ridden the popular theme park ride at Disneyland in California as a little kid with my mom and again as an adult with my family. Likewise, I rode the Haunted Mansion ride at Florida’s Disney World shortly after it opened with my mom and have ridden it dozens of times since with my wife and kids. It never gets old.
Over the years I have been reeled in by the master marketing of Disney imagineers and their many forms of merchandise based upon the popular ride. Somehow or other I have amassed a small collection of items ranging from art posters and statues to toys and tchotchkes of every variety. I have been gifted with relics actually used in the ride over the years ranging from doorknobs to wallpaper that once adorned the walls of this popular haunted mecca.
This past Christmas my family gave me the last in a series of art statues modeled after the characters depicted in the famous stretching portraits that greet visitors in the anteroom. Here Master Gracey invites all “foolish mortals” who dare enter his home by requesting that all visitors step into the “dead center” of the room. As the Ghost Host delivers his spiel, the room (which is actually a slow creeping elevator) begins to “stretch” vertically. The portraits on the wall elongate, revealing the grim fates of the previous residents depicted in the bucolic paintings seen only moments before. The paintings stretch into humorously macabre situations: a middle-aged bearded man holding a document is shown to be standing atop a barrel of dynamite in his boxer shorts with a candle lighting the fuse; a smiling elderly woman holding a rose is shown to be sitting on the tombstone of her late husband George, who is depicted as a stone bust with an ax in his head; and a confident-looking middle-aged man in a bowler hat is shown to be sitting on the shoulders of a frightened-looking man, while sitting upon the shoulders of a third man who is waist-deep in quicksand, an expression of terror on his face; and finally, a beautiful young girl holding a pink parasol is shown to be balancing on a fraying tightrope above the gaping jaws of a ferocious alligator.
She is one of the 999 ghosts that inhabit the Haunted Mansion and, like everything at Disney World, she has her own backstory. WDW cast members call her “Lillian Gracey” and say she was a tightrope walker who strung her rope across to Tom Sawyer’s Island from the Mansion grounds where she met her grizzly fate. She looks like she is completely oblivious to anything that is going on around her. She has no clue at all what is awaiting her below should she fall. Proud as I was, and still am, to add alligator girl to my modest collection, my daughter Jasmine shared some info with me that put a new spin on the statue.
Fresh from a New Year’s Eve trip to Disney World with her friends (they opened the park at 10:00 and stayed well after Midnight…you can only do that when you’re young) she informed me that the statue had been pulled from all sales outlets in the park. She explained how, time and time again, she and her friends listened while Disney sales staffers informed angry customers the statue was no longer being offered for sale. Jasmine asked one of the sales staff, known as “Cast Members”, why the statues had been pulled. The cast member explained it was a result of the August 2016 alligator attack on park property that had tragically killed a 2-year-old Nebraska boy. The cast member explained that people were getting angry because alligator girl was the last one they needed to complete their set.
Although the revelation was interesting , I didn’t think much more about it until I ran across an evocative amusement park relic a couple weeks later. It was a pair of souvenir salt & pepper shakers from the Kings Island amusement park near Cincinnati, Ohio. Although dating from the earliest years of the park (which opened in the Spring of 1972) the set had a distinctive Mid-Century Modern look to it that attracted me. On the front of each shaker was the image of a thick-maned lion resting in front of a wooden sign reading: “Trespassers will be eaten.” The set was a souvenir from the short lived Lion Country Safari attraction inside the park. 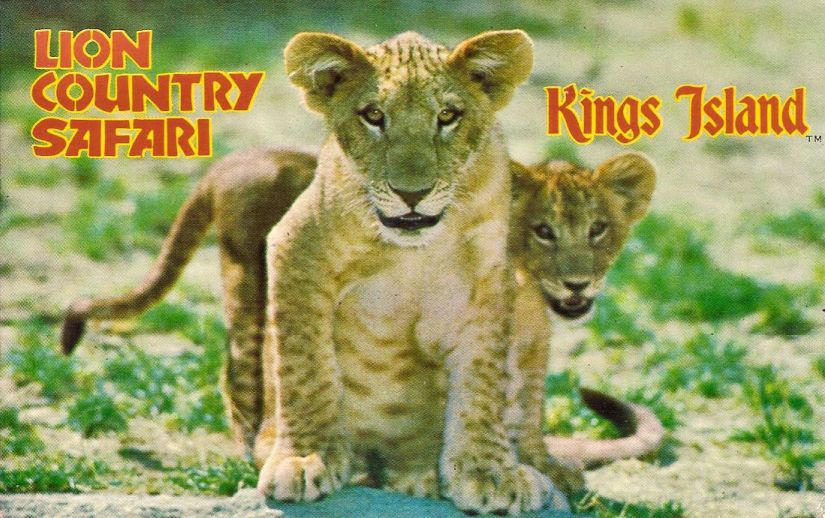 Don’t remember THAT part of Kings Island? Well, that may due to the fact that this “ride” came with an up charge. It required an extra 50 cent ticket to enter. Most kids didn’t go because they didn’t have the extra money or because their parents were unwilling to spring for the extra expense.
The Lion Country Safari opened on April 27, 1974, almost two years to the day from the opening of the park itself. The animal themed area featured various attractions, including multiple small animal exhibits, a restaurant (today known as the Stunt Crew Grill), a gift shop and a large monorail. In 1974, over 300 animals were housed inside the safari included 12 elephants, 25 rhinoceros, 5 giraffes, 4 hippopotamus, 20 ostriches, 20 zebras, 150 antelope, 1 cape buffalo, 75 “critters” (monkeys, swans, exotic birds, etc.) and 70 lions and assorted other big cats.
Mostly, the ride consisted of a two-mile monorail (known as Kenya Safari) that was part of the new trend of “drive-in zoos” popping up in amusement parks all over the country. The trains were fully enclosed and powered by electricity. They ran on rubber wheels and were designed to travel around six miles per hour. This allowed for a 20-25 minute ride. The park estimated the six train monorail could accommodate up to 2,000 guests per hour. 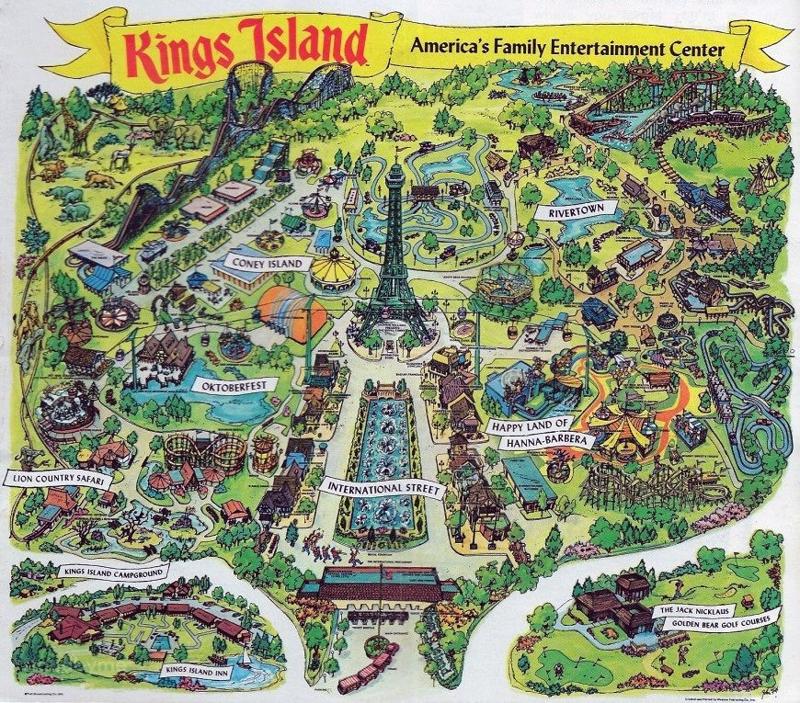 Kings Island’s Lion Country Safari was completely surrounded by nine-foot high chain-link fences. The fences were hidden from view by hills, strategically planted trees and thick shrubbery designed to create the illusion that visitors were actually in Africa rather than the Miami Valley. The lion section featured additional security measures by means of a separate six-foot high fence within the larger boundary fence. In addition, the electrical current running through the monorail track itself acted as a security measure by discouraging animals from using it as an escape route.
But, without a doubt, it was the animals that were the safari’s main attraction. In particular, as the name denotes, the lions. Originally, the animals were brought in by an outside third party vendor. As the animal population began to push 300, it became very clear, very soon that changes were needed. Although the safari was secure and there is no record of a guest ever having been harmed by an animal at the park, one incident in particular brought change and infamy to Kings Island’s Lion Country Safari. On July 24, 1976, a lion mauled a 20-year-old Lion Country Safari ranger to death. Officially, he had left his protected vehicle for “unknown reasons”. However, park legend insists that he was killed when he left the safety of his jeep to relieve himself.
Which brings me back to that classy looking set of Mid-century modern salt & pepper shakers and their depiction of a lion resting under the “Trespassers will be eaten” sign. I would imagine that the reason we don’t often see this Kings Island souvenir set is that it was surely pulled from the shelves after the Bicentennial year tragedy. If not directly pulled, they were certainly never reordered. Incidentally, this unnamed Safari Ranger is rumored to haunt the area where the attraction was once located. Today, that space is used for roller coasters Flight of Fear, Firehawk and the new Banshee (where the Son of Beast once stood).
However, although sales of those sardonically unfortunate salt & pepper shakers most certainly stopped, the encounters between employee and beast continued. On May 26, 1982, a park employee was attacked by a lion while cleaning the lion’s compound. 34-year-old Terry Raitt suffered a punctured trachea and several bite wounds to the head, chest and upper torso. He managed to climb onto the roof of a building to escape the attack. There paramedics reached him and he was rushed to Bethesda North Hospital in critical condition.Thankfully, he survived. In August, the OSHA ruled that the mauling was due to human error and found no safety violations. Raitt later admitted that he had accidentally left the gate open, allowing the lion to enter the area. Because of this attack, OSHA recommended that rangers be armed with handguns, alongside the shotguns that they already carried in their jeeps.
In the 20 years it was open, more than 15 million people visited the animal preserve before it closed in 1993. The air conditioned monorail was especially popular on blazing hot summer days in the years before the Splash park opened in 1989. Ultimately, the cost of the animal upkeep, low monorail ridership, use of the land, and lack of interest spelled doom for Lion Country Safari. Roller Coasters, which unlike animals, don’t ever die, became a much more attractive option.

There are a precious few safari traces available for urban explorers to discover. For perspective, the monorail entrance was located to the right of the current Drop Tower. The overpass that exists at the entrance to The Bat and The Banshee (now used as a park access road) was an original section of monorail track, as well as the access road rangers used to get to the animals. The monorail station was located where the Xtreme Skyflyer tow poles are now and near where the Son of Beast midway was once located.
However, should you still pine for the old Kings Island’s Lion Country Safari, you can catch a glimpse of it if you wish. The old monorail marks the entrances to Jungle Jim’s International Markets in Fairfield and near Eastgate Mall near Cincinnati. Ask anyone living east of Greenfield and they’ll tell you that you haven’t lived until you’ve been to Jungle Jim’s. Imagine a supermarket with an amusement park inside and you’ll get the idea. I suppose in today’s hyper-sensitive overly politically correct world, we can look back on things once considered innocent, humorous and inoffensive and wonder how we ever survived.