Spring training baseball is back. I am one of those legion of fans who wait every year to hear the five most beautiful words in the English language: “Pitchers and Catchers Report.” As a kid growing up, spring training baseball was always synonymous with Florida. In the Mid-1970s, my family took our spring break vacations at the Island Towers resort hotel in Fort Myers. It just so happened that the hotel was the spring training headquarters of the Kansas City Royals. So it was no big thing seeing guys like George Brett, Frank White, Freddie Patek, and Cookie Rojas hanging out at the pool or chasing my older sisters on the beach. Years later, I ran into Jamie Quirk at old 16th Street Bush Stadium and he informed me that the Island Towers were owned by Buck Martinez’s parents. 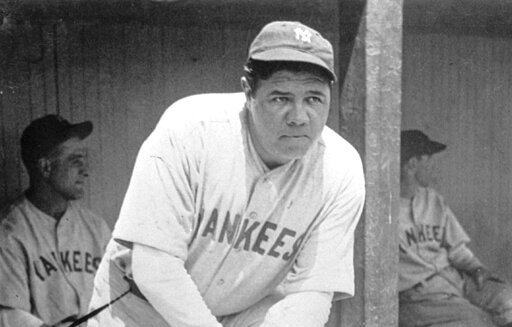 My grandparents retired to Cape Coral in the late 1970s and I recall one of their oldster neighbors showing me a photo album from the 1930s with pictures of the New York Yankees at Spring Training down there. Turns out his family lived near the facility, Fort Lauderdale if memory serves, where the Yankees trained. I can remember the photos in there of Lou Gehrig in a bathing suit (MAN that dude was HUGE!) and Babe Ruth in full uniform on the beach, two bats resting on his shoulder with his fielder’s glove and cleats hanging from the back like a hobo pouch. In his pin striped uniform! On the Beach! Everything in that photo would be worth a small fortune today, including the photo itself! 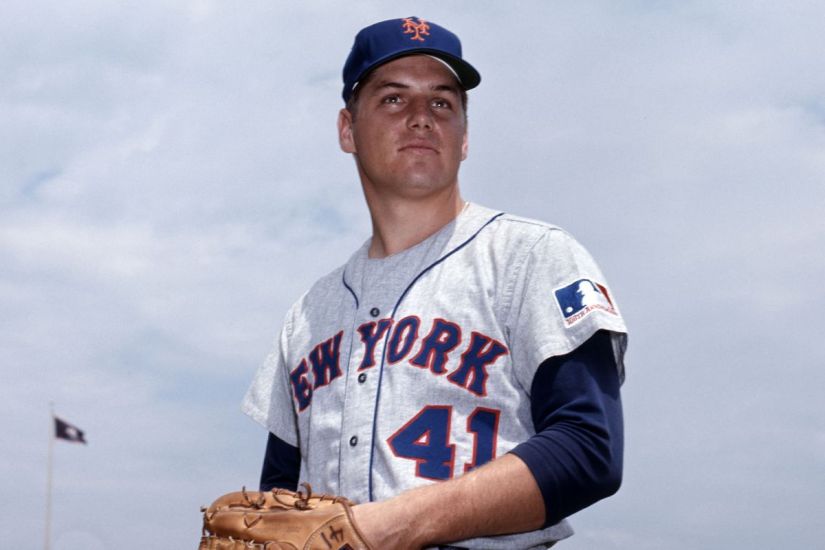 Somehow, I became a Blue Jays fan. Probably because I went to their first spring training game in franchise history in Dunedin. March 11, 1977 they beat the Mets 3-1 at Grant Field, which was built in 1930 and looked like it. I went to a few games that year. I distinctly recall sitting on a wooden bleacher seat right next to Tom Seaver who was talking to me like it was no big deal. And he was pitching that day. Within a few weeks, he was traded to the Cincinnati Reds “Big Red Machine.” Florida meant Spring Training, period. Somewhere along the line that changed.
They had spring training games in Arizona, something called the “Cactus League”, but that didn’t count for much back then. Today, more teams call Arizona home for spring training than ever before. The teams that play in Arizona now are the Diamondbacks, Chicago Cubs & White Sox, Cincinnati Reds, Cleveland Indians, Colorado Rockies, Kansas City Royals, Los Angeles Angels and Dodgers, Milwaukee Brewers, Oakland Athletics, San Diego Padres, San Francisco Giants, Seattle Mariners, and Texas Rangers. More than 100 games are scheduled between Feb. 21 – March 26, 2019. The broadcasters say that the travel in Florida is brutal, sometimes 3-4 hour bus rides, while the travel between stadiums in Arizona is usually less than an hour. When it comes to Arizona baseball, I think of a spring training story from the Cactus League that happened before I was born. The story emanates from Hi Corbett Field in spring training of 1961. But first a little background.

March of 1961 was a busy time: America’s brand new President John F. Kennedy creates the Peace Corps, The Beatles start performing at the Cavern Club, Nine African-American students from Mississippi’s Tougaloo College made the first peaceful attempt to end segregation by staging a “read-in” at the whites-only main branch of the Jackson municipal public library, NASA launches a Mercury-Redstone BD rocket from Cape Canaveral as one final test flight to certify its safety for human transport. Alan Shepard had volunteered to take the flight and become the first man to travel into outer space, but was stopped by Wernher von Braun from going, Less than three weeks later, Soviet cosmonaut Yuri Gagarin would, on April 12, would reach the milestone, Actor Ronald Reagan bursts onto the political scene with his speech “Encroaching Control” before the Phoenix chamber of commerce and the Boston Strangler Albert DeSalvo is captured.
Hi Corbett Field is located in Tucson, Arizona. Opened in 1937, it was originally called Randolph Municipal Baseball Park. In 1951, it was renamed in honor of Hiram Stevens Corbett (1886–1967), a former Arizona state senator who was instrumental in bringing spring training to Tucson, specifically by convincing Bill Veeck to bring the Cleveland Indians there in 1947. Veeck owned a ranch in Tucson, and he and players sometimes rode horses there after games. Veeck claimed that he moved the team’s training camp from Florida to Arizona in order to avoid Florida’s Jim Crow laws.

In the mid-1940s, while Veeck was owner of the then-minor league Milwaukee Brewers of the AAA American Association, during one of his team’s spring games in Ocala, Florida, the owner took a bleacher seat and started talking with the fans around him. Veeck had no idea that he had sat in the part of the stadium that was designated for African American fans. That turned out to be a big deal in the segregated “Jim Crow” South of the 1940s. Veeck had no idea that he was breaking a law that kept black fans from mixing with white spectators. In his book, “Veeck as in Wreck”, he wrote, “Within a few minutes, a sheriff came running over to tell me I couldn’t sit there.” The Brewers owner refused to move, and soon the mayor himself was threatening to force him to sit in another section. Veeck countered that if they wanted him to move from his seat, he would would move his team right along with him; to another city. The mayor finally backed down, but Veeck never forgot it.
In time, Veeck sold his stake in the Brewers and bought the Cleveland Indians. Veeck chose Phoenix, Arizona as the Indians’ spring training home for 1947. Veeck convinced the New York Giants to join his Indians so that the two teams could prepare for the season. The next season, Veeck signed Larry Doby to a contract, making him the American League’s first black player. Doby made his major league debut with the Indians on July 5, 1947, about 11 weeks after Robinson’s first game with the Brooklyn Dodgers. The Giants followed by signing Hall of Famer Monte Irvin the next year and the Cactus League was born. 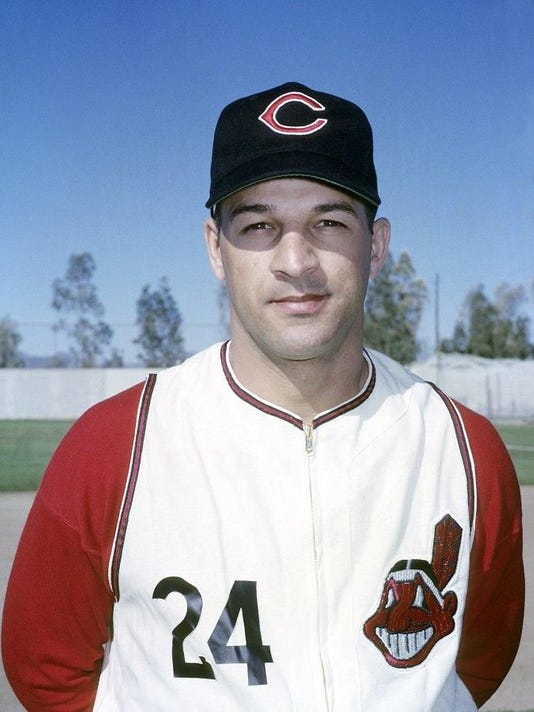 Last year, John Patsy Francona, a Cleveland Indians fan favorite better known as “Tito” died on the eve of spring training. It was the day before Valentine’s Day and the Indians’ pitchers & catchers were just trickling in to their spring training park in Goodyear, Arizona. The passing was made all the more bittersweet when you consider that the team was managed by Tito’s son, Terry Francona. Terry grew up in the Indians dugout where players called him “Little Tito.” As a member of the Montreal Expos, Terry played against our Indians here in Indianapolis at the old 16th street stadium. Before that he played college ball for Arizona State and led his team to the 1980 College World Series Championship. Terry Francona’s dad’s nickname of “Tito” was naturally passed down to his son, and although the broadcasters and news media still call him “Terry”, Tito is what the manager’s friends and players call him.
The elder Francona arrived in Cleveland in 1959 with baby Terry (born April 22 of that year) in tow. That season, Tito was at the top of his game and his presence knocked some all-time Indian greats right off the roster. Francona came to Cleveland in a one-for-one trade that sent Hall of Famer Larry Doby to the White Sox. (Ironically, it was the second time Tito had been traded for Larry Doby after the O’s traded him to the White Sox in 1958) Tito arrived at the “Mistake on the Lake” with big shoes to fill, but Francona, who began the 1959 season as a pinch hitter and utility man, quickly earned a regular place in the lineup. After going five-for-nine with a home run in a June 7 doubleheader against the Yankees, Francona replaced Jim Piersall as Cleveland’s starting center fielder. By the end of the season, he displaced Indians regular first baseman Vic Power, who was shifted to second base. 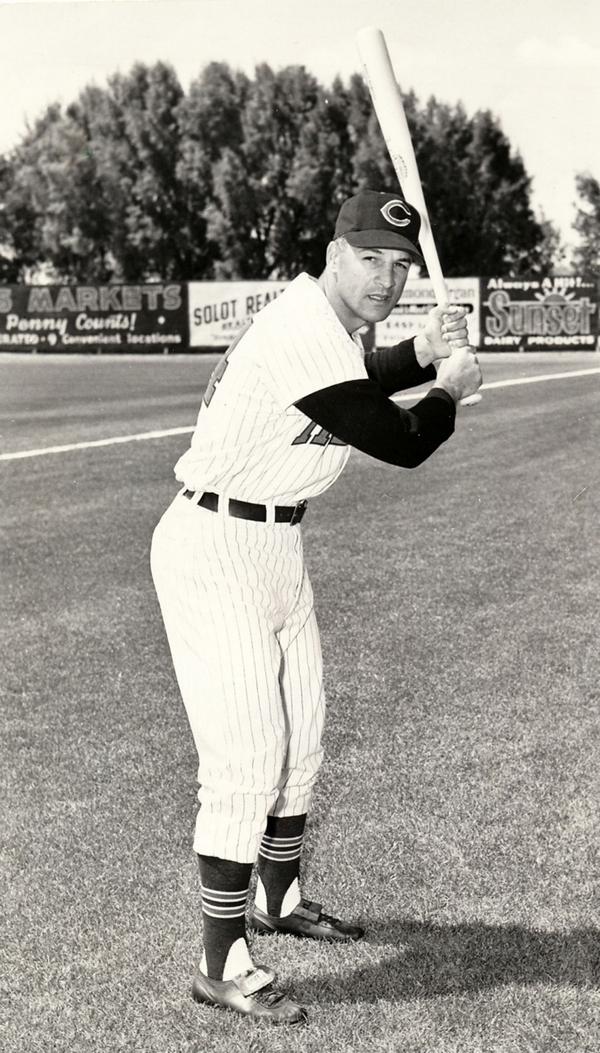 That season Tito batted .363 with a career high twenty home runs and 79 RBIs to help the Indians to an 89–65 record and second place in the American League. His .363 average would have led the league, however, he fell 34 at-bats short of the 3.1 per game necessary to qualify. The batting championship went to the Detroit Tigers’ Harvey Kuenn, with a .353 batting average, ten points below Tito. Francona finished fifth in balloting for the AL Most Valuable Player Award that season. He compiled 20 home runs, 17 doubles, 79 RBIs, 68 runs scored, 145 hits, a .414 on-base percentage and a .566 slugging percentage in 122 games.
Ironically, the next season, Francona was shifted to left field when the Indians traded home run leader Rocky Colavito for Kuenn, the same player who edged out Tito for the batting title the year before. With former Indianapolis Indians slugger Colavito gone (Indianapolis was Cleveland’s minor league affiliate from 1952-56), Francona was inserted in the clean-up spot in manager Joe Gordon’s batting order. Tito tallied only six home runs through the All-Star break and was dropped to the number six spot in the batting order for August, and then back up to number two by September. Tito hit eleven home runs over the rest of the season to finish with seventeen overall. He batted ,292 and his 36 doubles led the American League for 1960. The trade of Colavito for Kuenn is considered by longtime Indians’ fans the beginning of the “Curse of Rocky Colavito” and as you might imagine, Tito Francona was right in the thick of it.