During a spring training Cactus League exhibition game on March 26, 1961, Cleveland Indians outfielder Tito Francona hit a 350-foot home run against the Boston Red Sox at Hi Corbett Field in Tucson, Arizona. It’s 349 feet to right field, 366 feet to left field, and 410 feet to “dead” center. Unwittingly, when Tito’s homer flew over the right-field fence of paim-fringed Hi Corbett field and finally stopped rolling, it helped solve a murder case. As John Cota, a city parks employee, chased after it, he pulled up short at the edge of a shallow water trench. The ball rolled to a dead stop beside a body, partly covered with a coat, a .22-caliber revolver clutched in his hand. Police identified the body as that of Fred Victor Burden, 50, a house painter from Toronto. Burden was wanted by Tucson police in connection with the shooting death of former prize fighter James Cocio. 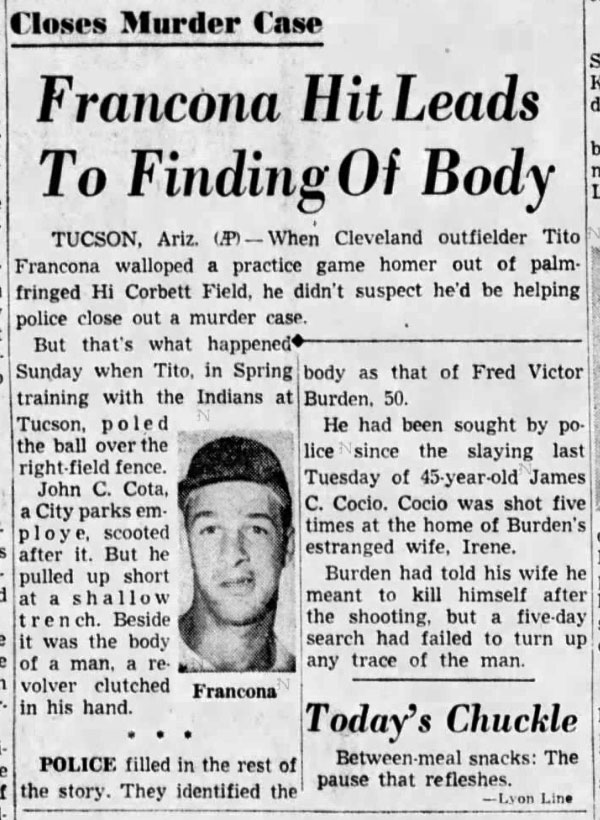 The front page of the Tucson Daily Citizen on March 27, 1961 ran a story headlined, “Practice Homer Leads To Body”. The story detailed, “An over-the-wall smash by Cleveland Indians’ Tito Francona yesterday led to the discovery that Frederick Victor Burden had carried out his threat to commit suicide after killing a man in the home of his estranged wife. Burden’s body, with a bullet in the head, was found by city parks employee John C. Cota, 52, of 238 E. E. 19th St., while he was looking for a ball that had just been knocked over the west wall during the practice at Hi Corbett Field in Randolph Park. The partially concealed body was found lying in a shallow watering trench under low – hanging palm fronds when discovered about 11:30 a m.”
A few days prior, the same paper covered the story about the fatal shooting of 45-year-old James Contreras Cocio. Burden’s body was found lying face up with a .22 automatic pistol clutched in the right hand, his glasses found hanging on a small palm tree nearby. County Pathologist Louis Hirsth said Burden had been dead at least 48 hours. The killer had shot himself in the roof of the mouth, the bullet lodging in the skull. Before the discovery, Burden had been charged in absentia with the first-degree murder of Cocio, a World War II Marine veteran and former three-time Arizona featherweight boxing champion.
Burden, out of the country since January, had returned home from Canada unexpectedly to find his 46-year-old wife Irene and Cocio together in the couple’s home at 2207 E. 20th St. Mrs. Burden told police the two men had argued over her and investigators said it was obvious that the Tuesday night killing was the result of that quarrel. Police said the woman’s husband fired five quick shots at the victim when Cocio opened the rear door of the home and discovered Burden standing outside in his stocking feet. A sixth shot fired at Cocio’s body nearly two hours later wounded Mrs. Burden in the left leg. Burden drove his wife to the home of her employer after discovering the wound, and told her he was going to kill himself. She was taken to St. Mary’s Hospital for treatment of the leg wound and discharged the same day her husband’s body was found. No record survives as to whether parks department employee John Cota retrieved, much less saved, the baseball.
What many might have viewed as a bad omen didn’t derail Tito’s season however. Francona kicked off the season with a Chief Wahoo Indian “Ki Yi Waugh Woop!” He was batting .293 with eleven home runs and 53 RBIs at the All-Star break of the 1961 season and Tito was named to the American League All-Star squad for the only time in his career. He finished the season batting .301 with sixteen home runs, 85 RBIs and he lead American League left fielders in fielding percentage.

Despite having emerged as the best defensive left fielder in the league, Francona was shifted to first base during spring training in 1962 and finished the season leading the American League in double plays turned as a first baseman. He finished with 14 homers, 28 doubles and batted .272. When Birdie Tebbetts took over as Indians manager in 1963, Francona was moved back into left, but his numbers fell drastically. His .228 batting average was a career low, and his ten home runs and 41 RBIs were his fewest over a full season. The Indians acquired All-Star Leon “Daddy Wags” Wagner to play left field prior to the 1964 season, so Francona split time between right and first base. After the season, he was dealt to the St. Louis Cardinals for a player to be named later and cash.
Tito had quite a career, spanning 15 seasons and including stops with eight other teams, including the Braves, Cardinals, A’s, Orioles, Phillies, Tigers, Brewers and White Sox. He was originally signed by the St. Louis Browns in 1952 but left the game for two years to serve in the U.S. Army, by the time he returned, the team had relocated and was now the Baltimore Orioles. In 1956 upon returning to the O’s, Tito finished tied with the Cleveland Indians’ Rocky Colavito for second place in American League Rookie of the Year balloting behind Chicago White Sox shortstop Luis Aparicio. For his career, Francona hit .272 with 125 homers, 656 RBIs and a .746 OPS in 1,719 games. Francona spent six seasons (’59-64) with the Indians.

And what about that curse? The curse of Rocky Colavito? Well, in recent years, it has dampened a little with the Indians “rebuilding years” of the past two decades. But. although they’ve played in three World Series Championships since 1995, they still haven’t won one. Here are just a few of the mishaps blamed on that curse since Colavito’s 1960 trade. September 1961: Fireballer “Sudden Sam” McDowell breaks two ribs throwing a fastball. June 1964: Third Baseman Max Alvis suffers an attack of spinal meningitis on a team flight. January 1965: The Indians reacquire Rocky Colavito from the Kansas City A’s in exchange for Rookie of the Year winner Tommie Agee and future 286-game winner Tommy John. July 1970: Reds star Pete Rose plows over catcher Ray Fosse in the All-Star game, effectively ending Fosse’s career in Cleveland. June 1974: Drunken fans pour onto the Cleveland Stadium field during ten-cent beer night, forcing a forfeit while destroying the diamond. March 1977: 20-game winner Wayne Garland hurts his arm in Spring training, effectively ending his career. March 1978: Indians trade Hall of Famer Dennis Eckersley to the Red Sox. July 1981: Cleveland hosts the All-Star game which is delayed until August by the MLB strike. August 1981: 1980 AL Rookie of the Year “Super Joe” Charboneau is sent down to AAA, never to be heard of again. April 1987: Sports Illustrated picks the Indians to win the pennant but they lose 101 games and finish last. March 1993: three Indians pitchers die in car crashes and a fourth is seriously injured. July 1994: Indians are speeding towards the World Series when the season is cancelled by a player’s strike.
It is believed by some that the curse extends to the Indians’ old spring training home in Tucson as well. Hi Corbett Field served as the spring training home of Cleveland from 1947 through 1992. Hi Corbett has not been used for Spring Training games since, but parts of the movie Major League were filmed there which ironically portrayed the Cleveland Indians as the laughing stock of the league. 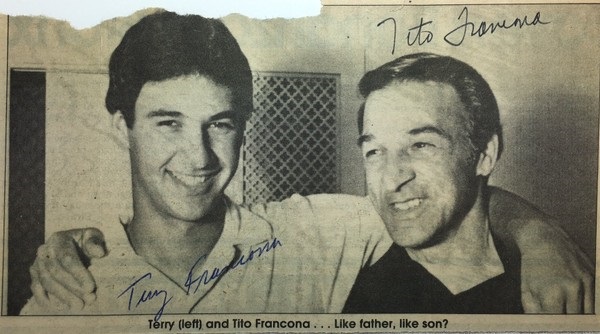 There is so much about Tito Francona that typifies that which makes baseball so interesting. Aside from one of the greatest nicknames in sports history, he was considered a journeyman for most of his career, but a damned good one. Tito Francona was a baseball player, a great husband and father and an even better teammate. When he died at the age of 84 he left a lasting legacy. Tito was there at the beginning of “The Curse” and although he’s gone, he’s likely to be there when the curse ends because “Little Tito” just might lead the Indians to a World Series Championship this season. After all, it was Francona who broke the Boston Red Sox Curse of Babe Ruth by winning two World’s Series titles in four years. Yep, baseball is a funny game.