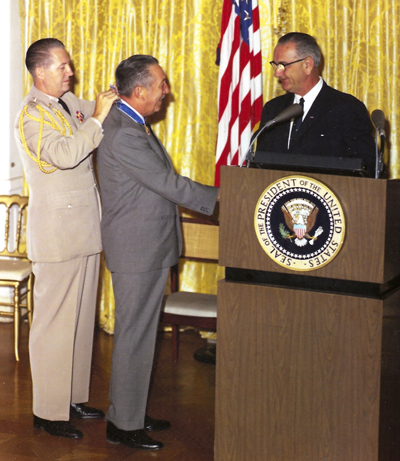 Mid-term elections are over, so I figure it is once again safe to write about politics. Well, sort of anyway. One of my favorite political stories involves a pair of baby-boomer heroes on the eve of the seminal 1964 Presidential election. On September 14, 1964, Walt Disney received the Presidential Medal of Freedom, the United States’ highest civilian honor, from Lyndon B. Johnson. The award recognizes those individuals who have made “an especially meritorious contribution to the security or national interests of the United States, world peace, cultural or other significant public or private endeavors”
There can be little doubt that Walt Disney deserved the honor, but controversy revolves around what Mr. Disney was wearing when he received the medal from President Johnson that day. Controversy from the man who brought us the happiest place on earth. What could that possibly be? Well, when Walt met Lyndon, he was wearing a Barry Goldwater for President button on his lapel. The lapel opposite the one that LBJ would pin the distinguished medal to.
The White House announced on July 3, 1964, that Walt would be a recipient of the Medal of Freedom. It was during the Goldwater campaign, and Walt Disney and his entire family were all united in their enthusiastic support of the Conservative Arizona Senator. Walt felt that it was all a ploy to surround the incumbent Democrat LBJ with people judged to be outstanding Americans for a powerful photo op during the campaign. The invitation came at a time when Walt Disney had bigger things on his mind: the New York World’s fair opening, the first death at Disneyland (Mark Maples on the Matterhorn) and the United States Lawn Bowling Championships. Wait, what? Lawn Bowling?
Betcha didn’t know that Walt Disney was one mean lawn bowler did ya? The White House ceremony was scheduled the Monday after the U.S. Lawn Bowling Championships at Buck Hill Falls, in the Pocono Mountains of eastern Pennsylvania near Scranton. The White House ceremony came at the end of a cross country journey Walt had arranged to take his Beverly Hills lawn bowling team back east to play in a few tournaments. Disney was passionate about lawn bowling at this time in his life. Walt bowled in the championships at Buck Hill Falls surrounded by, and competing against, just plain folk less than a week before he would meet the President of the United States.
At some point during his bowling sojourn, Walt decided he wanted to wear a Goldwater button to the White House. He asked an aid to get him a Goldwater pin. They got him two; a large 3″ pin with the slogan “Go-Go Goldwater” and a small tie-tac sized metallic gold metal lapel pin that combined the letter “G” and the numerals “64” as shorthand for “Goldwater in ’64”. Walt wore the big button on the plane going to Washington and joked to friends that he was going to wear it to the White House, although no-one really thought that he would.
Here’s where the story gets a little confusing. Some say that Walt wore the small “G ’64” pin in full view on the front of his lapel while others say he wore it pinned upside down under his lapel. Some of Walt’s friends say that he left the larger pin in his pocket while still others claim that he wore it pinned under his lapel. The very lapel that LBJ would pin the medal onto.
When Walt went to the podium to receive the medal from the President, he in some way tried to let Johnson know that he was wearing the Goldwater button. One account has LBJ discovering the pin while pinning the medal on. At the point of feeling the obstruction under the lapel, Walt flipped the lapel up to show the President the pin. Another states that LBJ saw the smaller tie-tac pin while initially pinning the medal onto the opposite lapel. Still another account claims that while Walt was on the podium and at a point when he and the President were face to face, Walt flipped up his lapel to reveal the pin.
For decades, this episode was viewed as an urban legend. It’s only recently that accounts from eye witnesses have surfaced confirming the incident. Although the exact details may remain fuzzy, the event itself has not been denied. Some members of the Johnson administration came forward to admit that LBJ “was not very happy about it…but I don’t think anything was said between them” and that “Johnson did not take Walt’s political commentary with good grace at all.”
One account of the incident comes from Emile Kuri, a longtime set decorator for the Disney live-action films. Kuri was a regular travel companion of Walt’s in the 1960s. Kuri recalls: “Walt didn’t like Johnson at all and he was wearing a Goldwater button. I was wearing the same button. But before I entered the White House, I took the button off. Walt didn’t. When he went into the White House, the aides to Johnson said, “Mr. Disney, please take that off.” He said, “Why should I? I’m voting for him.” You know he had the courage to do that. I didn’t. I had to take my button off. That man had such tremendous courage.” 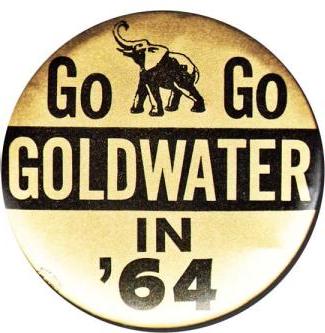 Back in Los Angeles, Walt told his daughter that he had worn the small button openly and that he had worn the larger “Go Go Goldwater” button on the underside of his lapel. He explained this double placement as “So if anyone said anything about it [the small button], I’d flash this [the larger button]… as if to say, ‘which one do you prefer I wear?’ Wearing an opponent’s button visible to LBJ would seem to have been a slap in the President’s face, a rude gesture difficult to reconcile with the Walt Disney legend.

Walter Elias Disney, was born in Chicago and grew up in Missouri. He was a very devout Congregationalist Christian, the religion of his family, and was named after the family minister. Walt’s political leanings are well-known to be conservative, anti-union, and vehemently anti-communist. Disney was a close ally of “Red Scare” zealot Joe McCarthy. Walt even testified against some of his Hollywood peers in McCarthy’s infamous House Un-American Activities Committee hearings. But was Walt Disney a boorish, ungrateful guest in the People’s House receiving an award so prestigious that- like the comparable Congressional Medal of Honor- it must be bestowed by an act of U.S. Congress?
Whatever the exact nature of Walt’s gesture, it was not defiant or insulting. It was more of an expression of Walt’s Midwestern sense of humor. If Walt said anything to LBJ about the incident, it would have surely been in jest. LBJ was well aware of Disney’s support for Goldwater before he bestowed the honor upon him. The subject of Walt’s support for Goldwater came up in one of LBJ’s recorded telephone conversations on September 6, 1964, eight days before the Medal of Freedom ceremony.
Disney was by nature an enthusiast, and in 1964, politics had become one of his enthusiasms. He had gotten to know General Dwight Eisenhower on social occasions at Palm Springs, and in July 1964, just a few days after the Medal of Freedom announcement, he visited the GOP national convention in San Francisco and was photographed there with Ike and his son, John. By wearing a Goldwater button, Walt may have been sticking up for his friends. Probably a mix of motives was at work: loyalty to fellow Republicans, sharp political differences with Johnson, and, perhaps most importantly, a once in a lifetime opportunity to pull the ultimate prank.
Years later, Walt’s daughter Diane said, “It was in bad taste not to remove it when he was received by the President. Dad did not respect Johnson, but did have great respect for the office he held. I was uneasy about what he said he’d done, but I did not let on. Rather, I probably said, ‘Good for you!’ or something like that. Alas, your animated man was not a perfect man. But he was not a coarse man. He did like to do the little unexpected ‘cute’ things like the bride and groom he designed for our wedding cake [the bride figure, representing Diane, was dressed in Levi’s, and the groom figure, representing Ron Miller, was dressed in Bermuda shorts and bare feet—and a football helmet]. He was the consummate gag man.” 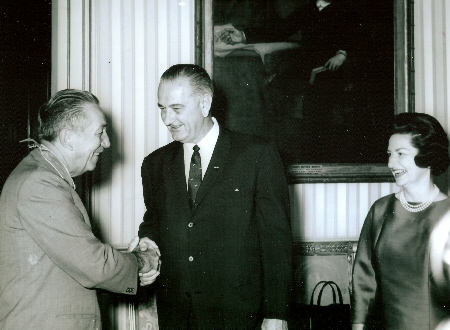 Whether you believe Walt Disney was making a political statement or just pulling a gag, this little known episode from the real life of a man whose name, like Ford, Hershey or Firestone, has become an iconic American brand, must surely make you smile.