I lost a favorite uncle last month. David A. McDuffee was my mother’s brother and a helluva man. He graduated from Ben Davis High School in 1958, as did my mom two years before him. He was a fixture in my life for as long as I can remember. I have fond memories of my Uncle Dave driving all the way from Avon to watch me play basketball all through my high school years. Then doing the same later in my life to watch high school baseball games while I was coaching. That’s just the kind of guy he was.
During his final ride to Boggstown cemetery, I couldn’t help but smile when the procession stopped for several minutes along a Shelby County road. The family had wisely decided to transfer the casket onto a hay wagon pulled by an old Farmall tractor for the final leg of his trip to the cemetery. It was my uncle’s tractor. As I recall, he named the thing Millard or Wilbur or something like that. He’d forgive me for getting the name wrong. He was not a farmer, he was a retired National Guardsman, faithful husband and loving grandfather…and uncle. He just wanted a tractor. That was my Uncle Dave.
At the cemetery, after the service, I wandered over to that tractor and gave it a good rub in his honor. In particular the steering wheel. All the while I was thinking about a memory from my childhood. My first car was a 1967 Mercury Comet. My grandfather had gone to a used car lot with my mom (his daughter) and purchased it when I was 16 years old. Before it was delivered I remember asking them to describe it and I recall my grandfather saying, “Well, it’s sporty.” (It wasn’t) But what made that car special to me was something my Uncle Dave had attached to the steering wheel. It was a suicide knob with a brightly colored 7-Up logo on it. My uncle worked at 7-up on Indy’s eastside for many years. He was a delivery driver and the suicide knob was a holdover relic from his years behind the wheel. I didn’t need it, that ’67 Mercury Comet had power steering, but I loved it just the same.
Don’t remember suicide knobs? Well, maybe you called them spinners, granny knobs, brodie knobs or “necker knobs”. They were usually made of plastic, rubber or bakelite and attached to the steering wheel by a metal bracket. They were most popular in the 1950s and 1960s in the age before power steering ruled the roads. These knobs enabled the driver to steer the wheel with one hand, freeing up the other hand for more important stuff. The term “necker knobs” came about when it was discovered that the driver could steer his car one-handed and wrap his free arm around his girlfriend, who was usually resting her head on the driver’s shoulder.

Although they were primarily designed for trucks and tractors, like fuzzy dice hanging from the rear view mirror, they quickly became a groovy accessory for hipsters all over the Circle City. The West Coast hot-rodders were the first to jump on the suicide knob bandwagon. Easy to grip, the knob was used to spin the steering wheel in one direction or the other while accelerating to cause the wheels to spin while whipping the car 180 degrees, or “half a donut.” West Coast hot-rodders called this maneuver “spinning a brodie.”
Back in the day, you could walk into any auto parts store in the city and choose from a wide array of these steering wheel knobs of every conceivable size and style. There were shiny chrome ones, Candy Apple or Orange Crush colored ones, product logos and, gulp, scantily clad women suicide knobs. If you were lucky, you might even score a free one from the auto parts store itself or some other transportation related company. Alas, unless you stumble across one at an antique shop or flea market, you never see suicide knobs anymore.
I loved that old 7-Up suicide knob but it did not come without its own built-in pitfalls. The knob itself was designed to spin in the drivers hand which sometimes caused it to slip out of your grip. Another disadvantage of the knob was that after turning a sharp corner and letting go, the steering wheel would spin rapidly causing the knob to hit the driver’s forearm or elbow. Or worse catching on loose clothing or jewelry. But no doubt about it, suicide knobs just flat out looked cool.
Brodie knobs (named for Steve Brodie, a New York City daredevil who jumped off the Brooklyn Bridge and survived on July 23, 1886.), have all but disappeared from cars today. But there was a time when every James Dean wannabe had one hand on the suicide knob and the other hand on his girlfriend. They were as much a part of the street scene as leather jackets, Brylcreemed ducktail hair and a pack of cigarettes rolled up in a t-shirt sleeve.
Most baby boomers grew up thinking that the Department of Transportation outlawed them in most states decades ago. But wait, that’s not true! More than likely, that rumor was started by concerned mothers and fathers to keep teenagers from buying them. There is no way of knowing, but that urban legend of a ban probably closely followed the coining of the term “Suicide Knob.” In truth, Brodie knobs are legal on private vehicles in most U.S. states. In New York State, a doctor’s prescription must be submitted to the New York State Department of Motor Vehicles, which in turn, shows that the knob is “required” on all vehicles the user drives and such requirement is entered on the user’s drivers license. You say you want a Brody knob on your steering wheel? Go right ahead, it’s legal in Indiana and you don’t even need a doctor’s note.
Their main use today is still in trucks, particularly 18-wheelers, where they allow simultaneous steering and operation of the radio or gearshift. They are also used on forklifts and riding lawnmowers, where frequent sharp turning is required. The knob is also standard equipment in most modern farm and commercial tractors, its main purpose being to ease single-hand steering while the driver operates other controls with his/her other hand or is traveling in reverse. Go on a gator excursion in Florida or Louisiana, you’ll most likely find one on the ship’s wheel. It’s a perfect way for captains to steer the boat with one hand and feed the gators with the other. Bringing new meaning to the term “Suicide knob.”
Over my years haunting roadside flea markets, antique malls and shows and yard sales, I have seen many different styles of suicide knobs offered for sale. Most of them have been well-used dull earth colored relics unworthy of comment until picked up and identified as a relic from the road. But others resonate in my memory like the 1939 World’s Fair version I saw many years ago. Or pin-ups like Bettie Page, Jayne Mansfield and Marilyn Monroe. Some were clear topped knobs containing pictures of long lost girlfriends or family members. But just as many bore familiar images like the Pep Boys, Sears, Skulls, Billiard balls, Mopar and every make and model of automobile you can imagine. 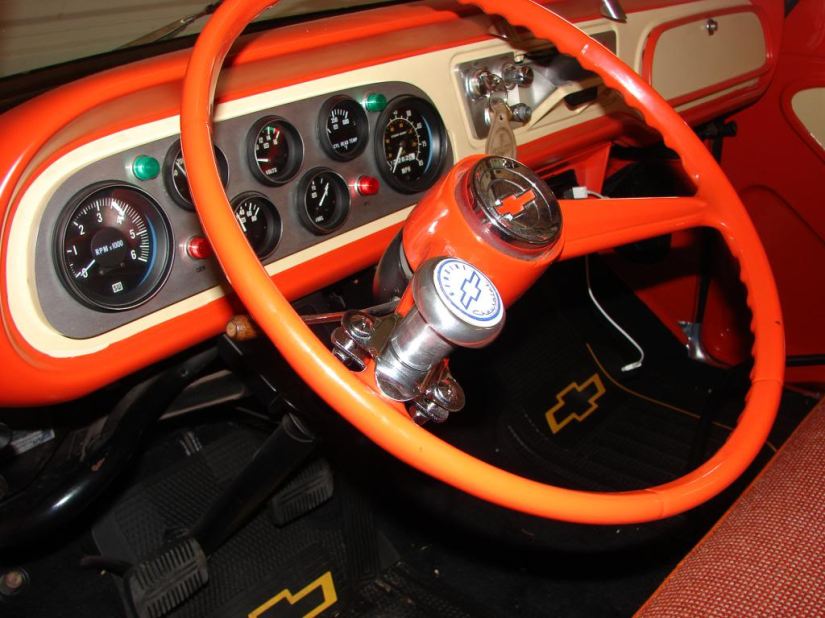 The manufacturers names that can be found on these knobs are unfamiliar to all but the most dedicated gearhead: Casco, Fulton, Morton and Santay among others. As fas as I can tell, suicide knobs are an invention unique to the United States. I’ve yet to find one from another country. I believe the VW version I once saw was produced for the American market. But I have my suspicion now that Cuba’s borders are opening up, we might find that the suicide knob is alive and well in that Caribbean time capsule. If you’re lucky, you can pick up a vintage suicide knob for ten bucks or less, but some of them command several hundred dollars each.
A search of the internet revels that suicide knobs are being reproduced and newly produced for car guys today. However, whether they are for use or display, I cannot say. You can still find them at truckstops, but then again nowadays you can find anything at a truckstop. There is a USA Federal OSHA labor law restricting their use for specific construction vehicles, mostly those vehicles hauling chemicals and potentially unstable loads. They are a staple, and in some states mandated, for use by drivers with physical limitations.
So in this “everything old is new again” retro world we live in, suicide knobs may be making a comeback. But in this age of power steering, smart phones and texting, the suicide knob will probably remain a novelty. As for that 1967 Mercury Comet of mine, it was stolen when I was in high school and I never saw it again. I don’t miss that car, but I sure miss that suicide knob. And I miss my Uncle Dave.