On July 16, 1967 (49 years ago this Saturday), the oddest concert pairing in music history came to an end: Jimi Hendrix dropped out as the opening act for The Monkees. Yes, it’s true. During the summer of 1967 the Jimi Hendrix Experience joined the as-seen-on-tv band The Monkees for a short 8-gig run of concerts. The king of psychedelic guitarists joined the tour on July 8, and lasted eight shows before leaving after three concerts at the Forest Hills Tennis Stadium in New York City on July 14, 15 and 16. As you may have already deduced, this absurd, hallucinatory pairing didn’t last long.
The Monkees’ 1967 summer tour marked the pinnacle of Monkeemania. On June 9, before the tour officially kicked off, the band played a show at the Hollywood Bowl, their tinseltown birthplace, in front of an adoring audience of over 17,000. Just five days earlier, The Monkees rocked the Emmy Awards by taking home two awards, including “Outstanding Comedy Series.” The tour commenced with the band’s third album, “Headquarters”, perched at #2 on the charts behind The Beatles’ Sgt. Pepper’s Lonely Hearts Club Band.
This unlikely concert bill was the brainchild of Hendrix’s manager, Mike Jeffery, who was seeking greater public exposure for his young client who was fast becoming a legend in the UK, but was an unknown in his native United States. For their part, The Monkees jumped at the opportunity. It was at a dinner party in John Lennon’s UK house where Monkee Mike Nesmith heard Hendrix play for the very first time. Nesmith recalled: “I was in London visiting John Lennon, and I was having dinner with him, (Paul) McCartney and (Eric) Clapton. And John was late. When he came in he said, “I’m sorry I’m late but I’ve got something I want to play you guys.” He had a handheld tape recorder and he played “Hey Joe.” Everybody’s mouth just dropped open. He said, “Isn’t this wonderful?” So I made a mental note of Jimi Hendrix, because Lennon had introduced me to his playing.” Nesmith failed to mention that his fellow Monkees Peter Tork and Micky Dolenz were at the dinner too.
The Monkees became instant Hendrix fans, following Jimi to California to witness his legendary performance at the Monterrey International Pop Festival in June 1967 which culminated with Jimi lighting his guitar on fire and holding it over his head. “Micky said, ‘We gotta get this guy,’” recalled Tork in the documentary The Monkees Story. “Micky was just enthusiastic about his music.” They encouraged their own manager to invite the Jimi Hendrix Experience to join their upcoming U.S. tour. Hendrix obviously didn’t have much to do with the arrangement. He’d made his opinion of the Monkees clear several months earlier in an interview with Melody Maker magazine: “Oh God, I hate them! Dishwater….You can’t knock anybody for making it, but people like the Monkees?”
Today, it’s easy for most hardcore music fans to dismiss The Monkees as bubble gum for the ears. But whatever you think of The Monkees’ music, you must admit that their tunes are catchy and that the band was anything but ordinary. After all, if you were at all shocked by the Hendrix connection, then you must be really stunned by the fact that the Beatles and Eric Clapton were among their legion of fans, let alone personal friends and peers.
True, The Monkees were originally formed as actors in a sitcom, whom Dolenz described as “an imaginary band… that wanted to be The Beatles,” but “was never successful.” On Sept. 8-10, 1965 an ad for cast members ran in Daily Variety and The Hollywood Reporter magazine. The ad read: “Madness!! Auditions. Folk & Roll Musicians-Singers for acting roles in new TV series. Running Parts for 4 insane boys, age 17-21. Want spirited Ben Frank’s types. Have courage to work. Must come down for interview.” Micky Dolenz, Peter Tork, Davy Jones and Michael Nesmith were selected out of 437 applicants.
Dolenz and Jones were actors while Tork and Nesmith were the true musicians of the group. Harry Nilsson, David Crosby and Stephen Stills auditioned for the sitcom but were not chosen. Popular legend claims that Neil Diamond and Charlie Manson also tried out, but that is not true. Manson was in jail and Diamond’s connection to the band was through his authorship of the hit songs “I’m a Believer” and “A Little Bit Me, a Little Bit You.”
However, it wasn’t long before the four members had mastered their instruments and began writing their own original songs. Overnight, The Monkees had evolved from a comic, lip-syncing boy band into genuine pop stars. Dolenz once described it as “the equivalent of Leonard Nimoy really becoming a Vulcan.” In the summer of 1967 the band embarked on a 29-city tour of the United States (the closest they ever came to Indianapolis was Chicago & Cincinnati). As improbable as it sounds today, the pairing of Hendrix and The Monkees actually sense. The Monkees wanted street cred and Hendrix needed an introduction to U.S. audiences. The Seattle-born Hendrix was known to music’s inner world as a touring musician and session player, but stardom in America still eluded him. 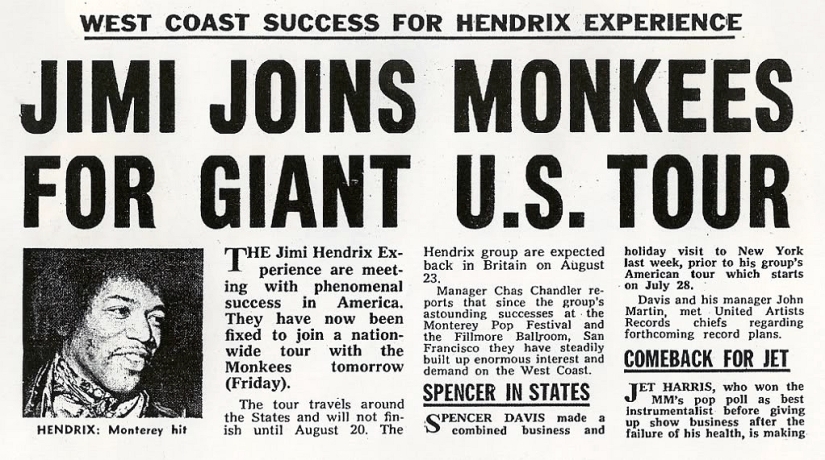 Jimi joined the tour on July 8 in Jacksonville, Florida, after The Monkees returned from three gigs in England. Now, imagine being a Monkees-loving teenager wedged into a sweaty, darkened, cram-packed concert hall anticipating the arrival of your favorite TV-pop band. Wearing your Monkees bubblegum machine pins, flipping through your official Monkees trading cards and holding your hand lettered poster professing your love for one Monkee or another. The curtain rises and this new guy Jimi Hendrix storms the stage to melt your face off while playing the guitar with his teeth!
Predictably, the reception given to Hendrix by Monkees fans (mostly young kids dragging along their parents as chaperons) was less than worshipful. As Mickey Dolenz later recalled, “Jimi would amble out onto the stage, fire up the amps and break out into ‘Purple Haze,’ and the kids in the audience would instantly drown him out with ‘We want Davy!’ God, was it embarrassing.” The Monkees’ young fans were confused by the overtly sexual stage antics of Hendrix, and when he tried to get them to sing along to “Foxy Lady” they stubbornly screamed “Foxy Davy!”
The fans’ chilly reception not withstanding, tales from the tour reveal that everyone involved got along great. “You can’t imagine what it must have been like for an act like Jimi Hendrix opening for the Monkees,” Dolenz wrote in his autobiography I’m a Believer. “It was evident from the start that we were witness to a rare and phenomenal talent. I would stand in the wings and watch and listen in awe.” Peter Tork recalls, “He was such a sweet guy. It was really just a pleasure to have him around for company.” But the group’s young audiences, as well as their parents who often accompanied them at shows, didn’t feel the same way.

“[The parents] were probably not too crazy about having to sit through a Monkees concert,” said Dolenz, “much less see this black guy in a psychedelic Day-Glo blouse, playing music from hell…then lighting it on fire.” As for The Monkees, they pushed for Jimi Hendrix to open for them simply because they wanted to watch him play every night. The boys would show up early just to witness greatness. Tork later said that “it didn’t cross anybody’s mind that it wasn’t gonna fly…And there’s poor Jimi, and the kids go, ‘We want the Monkees, we want the Monkees.’ We went early to the show and listened to what this man could do because he really was a world class musician.” But in reality, few of the anxiously screaming Monkees fans cared to sit through an act they could neither comprehend nor appreciate.

The Jimi Hendrix Experience experiment lasted just eight of the 29 scheduled tour dates. After only a few gigs, Hendrix grew tired of the “We want the Monkees” chant that met his every performance. Matters came to a head a few days later as the Monkees played a trio of dates in New York. On Sunday July 16, 1967, Jimi flipped off the audience at Forest Hills Stadium in Queens, threw down his guitar and walked off stage, leaving Monkeemania forever in his wake. After all, “Purple Haze” and Are You Experienced? were climbing the American charts, and it was time for him play for audiences who wanted to see him. He asked to be let out of his contract, and he and the Monkees amicably parted ways.
No great loss for either band. A couple months later, Melody Maker presented Hendrix with a”World’s Top Musician” award. The Monkees sitcom was canceled in 1968, but the band continued to record music through 1971. Hendrix, of course, went on to achieve super stardom before dying three years later. The Rock and Roll Hall of Fame describes Hendrix as “arguably the greatest instrumentalist in the history of rock music”. Despite the fact that The Monkees have sold more than 75 million records worldwide and at their peak in 1967, outsold The Beatles and The Rolling Stones combined, the Rock and Roll Hall of Fame refuses to recognize them. Funny how things work out sometimes, isn’t it?

1 thought on “The Monkees and Jimi Hendrix-Believe it.”