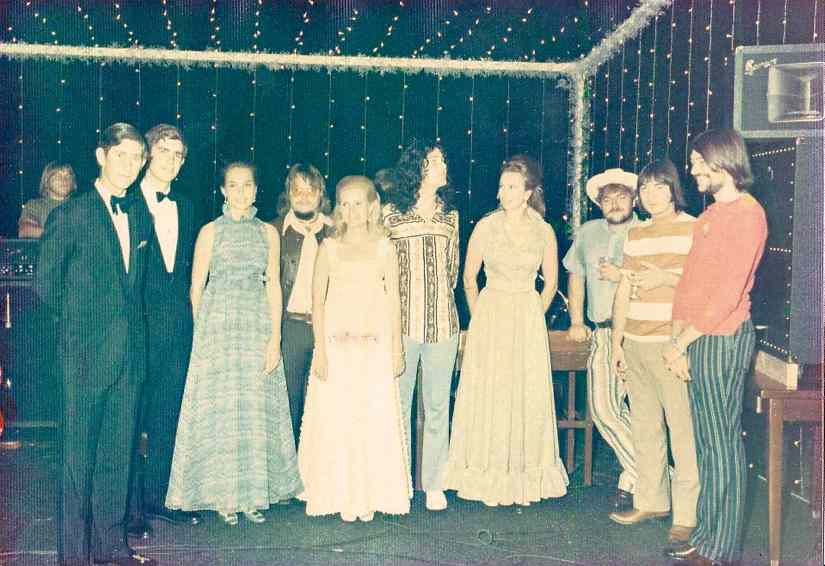 If you were born after 1970, this story probably won’t mean a thing to you. But if you’re a baby boomer (like me) you might get a giggle out of it. First families seem boring nowadays compared to the sixties and seventies. Caroline, John-John, those strung out Ford kids, Amy & Billy Carter and even the dissenting Reagan siblings, they always made for good copy. True Roger Clinton had his moments and the Bush twins had some hi-jinx, but for the most part…BORING! But those Nixon girls, now THEY were some rebels!
Okay, maybe not. Julie Nixon (Eisenhower) was America’s sweetheart and her sister Tricia Nixon (Cox) was not far behind. But for a time, Tricia gave “wild and crazy” a run, even if was in a very WASPish sort of way. For our generation, finding out that Tricia might have been edgy and cool is like watching The Red Hot Chilli Peppers or Lady Gaga sing with Tony Bennett. Might be hip, but it ain’t very cool.
45 years ago this Friday (July 17, 1970) Tricia Nixon’s favorite band, The Guess Who, played the White House. The Guess Who, a Canadian rock band from Winnipeg, Manitoba led by Burton Cummings and Randy Bachman (of Bachman–Turner Overdrive), had a string of hit singles, including “Laughing”, “Undun”, “These Eyes” and “Share the Land”. So I suppose the Guess Who were about as cool as Tricia could get. By the time the band hit the White House, they were in the midst of a transformation from AM radio popstars to a louder, sharper Underground Rock Band for FM radio. With songs like “No Time”, “No Sugar Tonight” and “American Woman” (which would hit # 1 on the charts), the band was changing it’s image. That change in tone did not go unnoticed by Tricia’s mom. Pat Nixon. 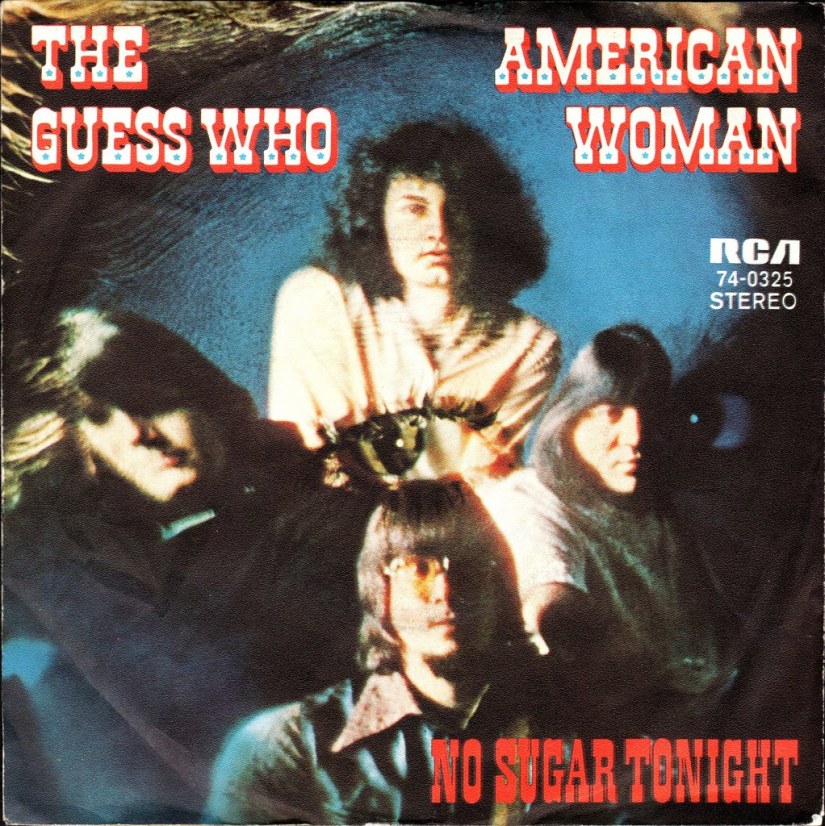 Despite it’s popularity and Patriotic sounding title, “American Woman” posed a problem for the Nixon family and more importantly, the Nixon White House. The song was viewed, rightly or wrongly, as as war protest anthem and this was not your ordinary White House garden party. It was a royal reception for England’s Prince Charles and Princess Anne, who were guests at the White House. No doubt the fact that the band was from Canada, a British territory ruled by the Royal guest’s mother, made perfect sense and sealed the deal.
In the summer of 1970, America was embroiled in an unpopular war in Vietnam, still struggling with Civil Rights, the Cold War, Inflation and global instability. America was a target, and here was this ubiquitous song, heard everyday on radio stations across the country, casting further aspersions on the United States. And worse, the band that sang that song was invited to play on the White House lawn. This could get complicated.
Canada’s official diplomatic position during the Vietnam War was that of a non-belligerent. Although our neighbors to the north imposed a ban on the export of war-related items to the combat areas, they weren’t necessarily against supplying equipment and supplies to the American forces, as long as those goods weren’t sent directly to South Vietnam. Those goods included relatively benign items like boots and gear, but also aircraft, munitions, napalm and commercial defoliants, the latter of which were fiercely opposed by anti-war protesters at the time. Between 1965 and 1973, Canadian companies sold $2.47 billion in materiel to the United States. Canada, in accordance with existing treaties, also allowed their NATO ally to use facilities and bases in Canada for training exercises and weapons testing. A sticky wicket to be sure.
But what about THAT song, “American Woman”? Let me refresh your memory. Although the band denies it, critics and wags alike claim the song is a “Thanks, but no thanks” anthem about the Vietnam War. Rightly or wrongly, Canadians believed that America was trying to get Canada to adapt nuclear missiles and join them in their Cold War jungle conflict. When the song warns the American Woman to “Don’t come hangin’ around my door, I don’t wanna see your face no more, I got more important things to do, then spendin my time growin old with you” he’s basically saying that Canada has its own troubles and that the USA burned the blister, now they must sit on it.
The rest is pretty self-explanatory: “I don’t need your war machine” refers to nuclear weapons. “I don’t need your ghetto scenes” refers to the after math of the explosives. “Colored lights can hypnotize” refers to explosions of the bombs. “Sparkle someone else’s eyes” means, well, get lost. Despite the fact that the song was a huge hit at the time, it wasn’t the type of song Tricia would play for the folks. The Guess Who didn’t perform “American Woman” that day because they were asked not to “as a matter of taste.” That request came from first lady Pat Nixon’s press secretary. Fits right into the “clean hands doctrine” of the Nixon White House that would end a President’s tenure a couple of years later, huh?
Burton Cummings, who wrote and sang the song, insists it has nothing to do with politics but is a song about, what else, girls. “What was on my mind was that girls in the States seemed to get older quicker than our girls and that made them, well, dangerous,” he told the Toronto Star in 2014. “When I said ‘American woman, stay away from me,’ I really meant ‘Canadian woman, I prefer you.’ It was all a happy accident.” Yeah I know, that excuse doesn’t wash with me either.
In John Einarson’s book, “American Woman-The Story Of The Guess Who”, Cummings offered a more plausible explanation: “People read their own meanings into that song. They thought the American woman I alluded to was the Statue of Liberty and RCA contributed to that image with the ad campaigns. It came from looking out over a Canadian audience after touring through the southern U.S.A. and just thinking how the Canadian girls looked so much fresher and more alive. As opposed to an anti-American statement, it was more of a positive Canadian statement. ”

Cummings went on to say this about about playing The White House: “It was strange. All the guests were white, all the military aides were white in full military dress, and all the people serving food were black. And the way the White House was landscaped it kind of looked like Alabama …before Lincoln issued the Emancipation Proclamation. It left a bad taste in my mouth. It was terribly racist and this was 1970. I remember sitting with Edward Lear, heir to the Lear Jet fortune, and Billy Graham’s daughter was there. It was really the so-called upper crust aristocracy of America, very stuffy, boring people…We were told not to play “American Woman” but we did “Hand Me Down World.” We thought we were just as cool for doing it. But we did get a great tour of The White House, though, and (band mate) Leskiw and I spent an hour going through all these rooms and corridors seeing stuff most people don’t get to see.”
The 68-year-old Cummings now has no doubt the band was brought in to impress the royal guests. “It left a bad taste in my mouth,” he told the Winnipeg Free Press recently. “They wanted a Commonwealth act when Charles and Anne went there. We were the token Commonwealthers.”
Even though he had left the band by the time of The White House gig, guitarist Randy Bachman remembers the song having a much more spontaneous genesis: it was written on stage with no thought given to deeper meaning or politics.The Guess Who was playing a show at a curling rink in Ontario when he broke a string on his guitar. In those days, that meant stopping the show until he could replace it. His bandmates left the stage, and Bachman put a new string on his ’59 Les Paul. The next challenge was getting it in tune (he didn’t have a tech or even a tuner in those days), so he went in front of Cummings’ electric piano and hit the E and B notes to give him reference. As he tuned his guitar a riff developed, then something magical happened.
“I started to play that riff on stage, and I look at the audience, who are now milling about and talking amongst themselves,” Bachman said. “And all their heads snapped back. Suddenly I realize I’m playing a riff I don’t want to forget, and I have to keep playing it. So I stand up and I’m playing this riff. I’m alone on stage.” The band’s drummer Garry Peterson, who had made his way to the audience, jumped on stage and started playing. Bassist Jim Kale heard the ruckus and joined them, and finally Burton Cummings came up and grabbed the microphone. “Sing something!” Bachman implored him. Burton obliged: the first words out of his mouth were, “American woman, stay away from me.” The crowd, which included a fair number of draft dodgers and war protesters, loved it. And the rest was history.
Tricia Nixon cool? Well, maybe not by today’s standards. But maybe you’ll see that Guess Who gig in a different light when you learn what else was going on at that party. If you’re a fan of Downton Abbey, you’ll get a kick out of next week’s article when we explore Tricky Dick Nixon and the hook-up.

Next Week: Part II: Tricky Dick Nixon and the Hook Up.