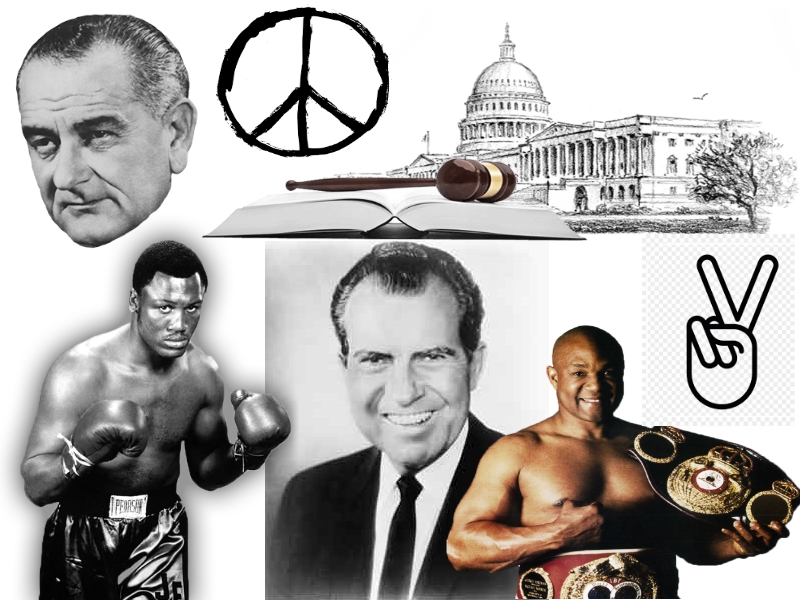 Were you alive on January 22, 1973? If so, consider this a reminder, if not, let me show what a typical day was like for a late-stage Baby Boomer like me. January 22, 1973 was a Monday in the Age of Aquarius. All in the Family was # 1 on television and The Poseidon Adventure was tops at the box office. Carly Simon was riding the top of the charts with her hit song “You’re so vain.” A song that has kept people guessing who she’s singing about to this day. Is it Warren Beatty? Mick Jagger? David Cassidy? Cat Stevens? David Bowie? James Taylor? All of whom have been accused. Carly has never fessed up, although she once admitted that the subject’s name contains the letters A, E, and R. 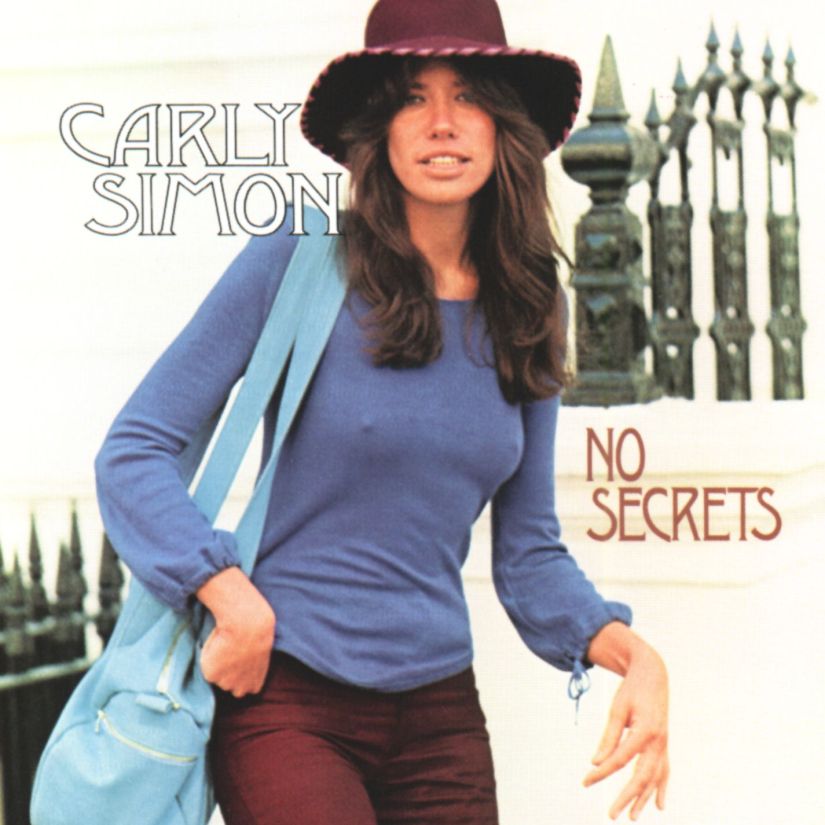 The month of January 1973 had started on a somber note with memorial services in Washington D.C. for President Harry S Truman on the 5th (he died the day after Christmas 1972). Then, Judge John Sirica began the Nixon impeachment proceedings on the 8th with the trial of seven men accused of committing a ” third rate burglary” of the Democratic Party headquarters at the Watergate. Next came the Inauguration of Richard Nixon (his second) on the 20th. Historians pinpoint Nixon’s speech that day as the end of the “Now Generation” and the beginning of the “Me Generation.” Gone was JFK’s promise of a “New Frontier,” lost was the compassionate feeling of the Civil Rights movement and LBJ’s dream of a “Great Society.” The self-help of the 1960s quickly morphed into the self-gratification of the 1970s, which ultimately devolved into the selfishness of the 1980s. 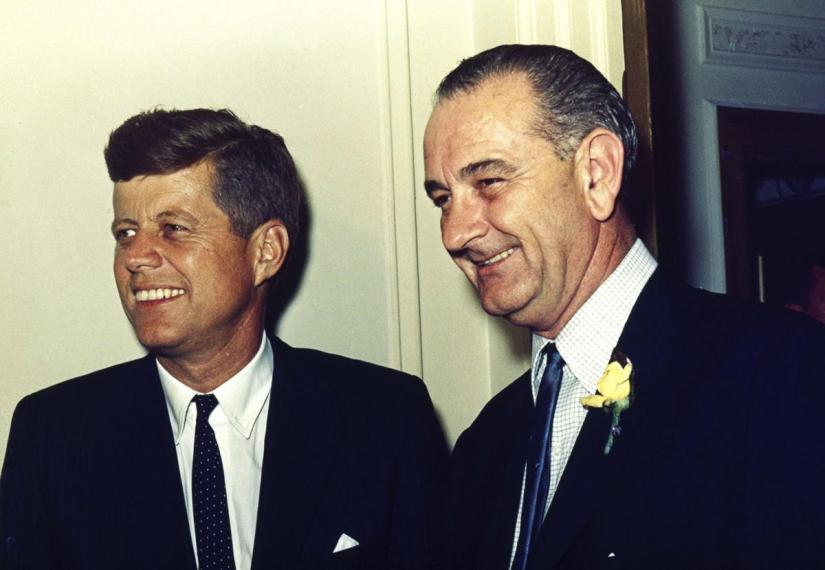 The line between want and need became hopelessly blurred and remains so to this day.
Twelve years before, John F. Kennedy decreed, “Ask not what your country can do for you, ask what you can do for your country.” On January 20th, 1973, Richard Nixon, purposely twisted JFK’s inaugural line by declaring , “In our own lives, let each of us ask—not just what will government do for me, but what can I do for myself?” At that moment, the idealism of the sixties gave way to narcissistic self-interest, distrust and cynicism in government of the seventies. Although it had been coming for years, when change finally arrived, it happened so fast that most of us never even noticed.
January 22nd was warm and rainy. It was the first Monday of Nixon’s second term and it would be one for the books. That day, Nixon announced that the war in Vietnam was over. The day before, his National Security Adviser Henry Kissinger and North Vietnamese politburo member Lê Đức Thọ signed off on a treaty that effectively ended the war; on paper that is. The settlement included a cease-fire throughout Vietnam. It addition, the United States agreed to the withdrawal of all U.S. troops and advisers (totaling about 23,700) and the dismantling of all U.S. bases within 60 days. In return, the North Vietnamese agreed to release all U.S. and other prisoners of war. It was agreed that the DMZ at the 17th Parallel would remain a provisional dividing line, with eventual reunification of the country “through peaceful means.”
That same day, the United States Supreme Court issued their landmark decision 410 U.S. 113 (1973). Better known as Roe v. Wade. Instantly, the laws of 46 states making abortion illegal were rendered unconstitutional. In a 7-2 decision, the U.S. Supreme Court ruled that a woman’s right to privacy extended to her right to make her own medical decisions, including having an abortion. The decision legalized abortion by specifically ordering that the states make no laws forbidding it. Rove V. Wade came the same day as the lesser known ruling, Doe v. Bolton, 410 U.S. 179 (1973), which overturned the abortion law of Georgia. 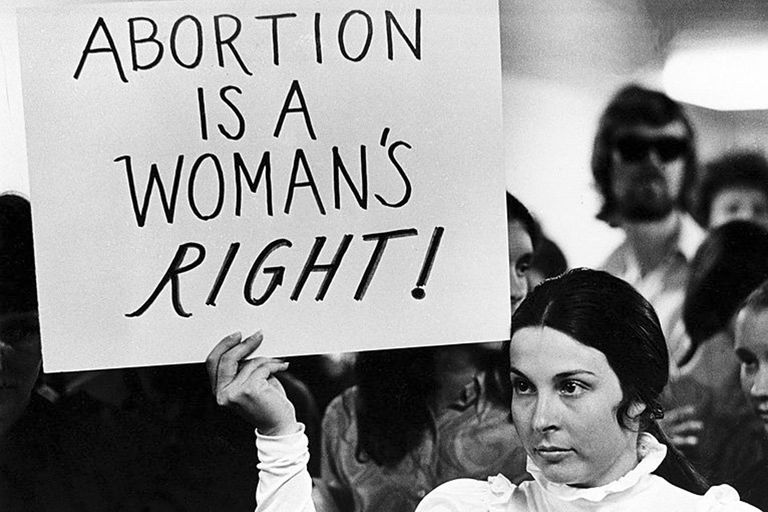 The Georgia law in question permitted abortion only in “cases of rape, severe fetal deformity, or the possibility of severe or fatal injury to the mother.” Other restrictions included the requirement that the procedure be “approved in writing by three physicians and by a three-member special committee that either continued pregnancy would endanger the pregnant woman’s life or “seriously and permanently” injure her health; the fetus would “very likely be born with a grave, permanent and irremediable mental or physical defect”; or the pregnancy resulted from rape or incest.” Only Georgia residents could receive abortions under this statutory scheme: non-residents could not have an abortion in Georgia under any circumstances. The plaintiff, a pregnant woman known as “Mary Doe” in court papers, sued Arthur K. Bolton, then the Attorney General of Georgia, as the official responsible for enforcing the law. The same 7-2 majority that struck down a Texas abortion law in Roe v. Wade, invalidated the Georgia abortion law.
The Roe v. Wade case, filed by “Jane Roe,” challenged a Texas statute that made it a crime to perform an abortion unless a woman’s life was in danger. Roe’s life was not at stake, but she wanted to safely end her pregnancy. The court sided with Roe, saying a woman’s right to privacy “is broad enough to encompass a woman’s decision whether or not to terminate her pregnancy.” Dozens of cases have challenged the decision in Roe v. Wade in the 46 years since the landmark ruling and the echoes of challenge are heard to this day. 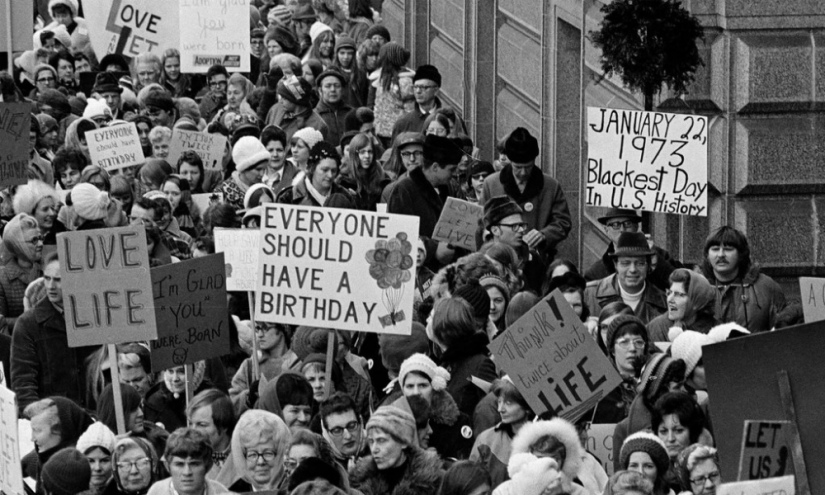 And what did Nixon think about that day’s ruling? The same Oval Office taping system that would bring about his downfall in the Watergate Scandal recorded his thoughts on Roe V. Wade for posterity. “I know there are times when abortions are necessary,” he told aide Chuck Colson, “I know that – when you have a black and a white, or a rape. I just say that matter-of-factly, you know what I mean? There are times… Abortions encourage permissiveness. A girl gets knocked up, she doesn’t have to worry about the pill anymore, she goes down to the doctor, wants to get an abortion for five dollars or whatever.” Yep, that was the President of the United States talking. And his day wasn’t even over yet.
At 3:39 p.m. Central Time, former President Lyndon B. Johnson placed a call to his Secret Service agents on the LBJ ranch in Johnson City, Texas. He had just suffered a massive heart attack. The agents rushed into LBJ’s bedroom where they found Johnson lying on the floor still clutching the telephone receiver in his hand. The President was unconscious and not breathing. Johnson was airlifted in one of his own airplanes to Brooke Army General hospital in San Antonio where he was pronounced dead on arrival. Johnson was 64 years old. Shortly after LBJ’s death, his press secretary telephoned Walter Cronkite at CBS who was in the middle of a report on the Vietnam War during his CBS Evening News broadcast. Cronkite abruptly cut his report short and broke the news to the American public. 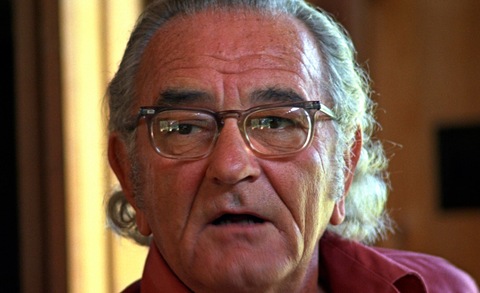 His death meant that for the first time since 1933, when Calvin Coolidge died during Herbert Hoover’s final months in office, that there were no former Presidents still living; Johnson had been the sole living ex-President Harry S. Truman’s recent death. Johnson had suffered three major heart attacks and, with his heart condition recently diagnosed as terminal, he returned to his ranch to die. He had grown his previously close-cut gray hair down past the back of his neck, his silver curls nearly touching his shoulders. Prophetically, LBJ often told friends that Johnson men died before reaching 65 years old, and he was 64. Had Johnson chosen to run in 1968 (and had he won) his death would have came 2 days after his term ended. As of this 2019 writing, Johnson remains the last former Democratic President to die.

Nixon mentioned all of these events (and more) on his famous tapes. All the President’s men are there to be heard. Along with Colson, Nixon talks with H.R. Haldeman, John Ehrlichman (whom ha calls a “softhead” that day), Bebe Rebozo, Ron Ziegler, and Alexander Haig. Haldeman is the first to inform Nixon of LBJ’s death in “Conversation 036-051” by stating “He’s dead alright.” For his part, Nixon states in “Conversation 036-061” that it makes the “first time in 40 years that there hasn’t been a former President. Hoover lived through all of 40 years” and then refers to the recent peace treaty, “In any event It’ll make him (LBJ) look better in the end than he would have looked otherwise, so… The irony that he died before we got something down there. The strange twists and turns that life takes.” 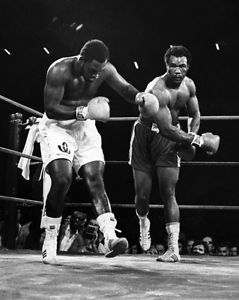 Another event took place that night to round out the day, but unlike the others, you won’t find mention of it on the Nixon tapes. In Jamaica, a matchup of two undefeated heavyweight legends took place. Undisputed world heavyweight champion Smokin’ Joe Frazier (29-0) took on the number one ranked heavyweight challenger George Foreman (37-0) in Jamaica’s National Stadium. Foreman dominated Frazier by scoring six knockdowns in less than two rounds. Foreman scored a technical knockout at 1:35 of the second round to dethrone Frazier and become the new undisputed heavyweight champion (the third-youngest in history after Floyd Patterson and Cassius Clay). This was the fight where ABC’s television broadcaster Howard Cosell made the legendary exclamation, “Down goes Frazier! Down goes Frazier! Down goes Frazier!”
“This is a peace that lasts, and a peace that heals.” Nixon announced to the American people the next day. The announcement came exactly 11 years, one month and one day after the first American death in the Vietnam conflict: 25-year-old Army Specialist 4th Class James Thomas Davis of Livingston, Tenn., who had been killed in an ambush by the Viet Cong outside of Saigon on Dec. 22, 1961. For you budding numerologists out there, that translates to 11-1-1. It was all downhill from there. LBJ’s death precipitated the cancellation of several Inauguration events and a week later, on January 30, former Nixon aides G. Gordon Liddy, James W. McCord Jr. and five others were convicted of conspiracy, burglary and wiretapping in the Watergate incident. The dominoes were falling and eventually “Down goes Nixon! Down goes Nixon!”