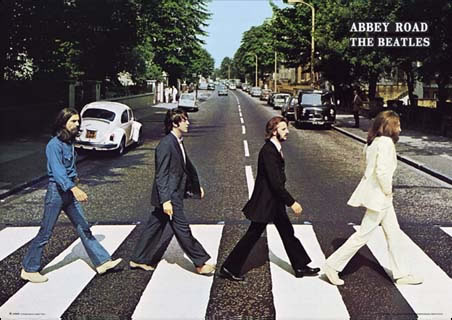 By the time The Beatles released their eleventh, and ultimately last, studio album Abbey Road on September 26, 1969, the “Paul is dead” rumor had developed a life of it’s own. Although Let It Be was the last album released before the band’s dissolution in 1970, work on Abbey Road began in April 1969. Although the band was barely speaking to each other at the time, Abbey Road is widely regarded as one of The Beatles’ best albums. Rolling Stone placed it at number 14 on its list of “The 500 Greatest Albums of All Time”. In 2009, readers of the magazine also named Abbey Road the greatest Beatles album. But in the fall of 1969, many Beatle fans were in the throes of mourning for what they believed was their dearly departed bass player, Paul McCartney. And the cover of Abbey Road did little to quell the controversy. 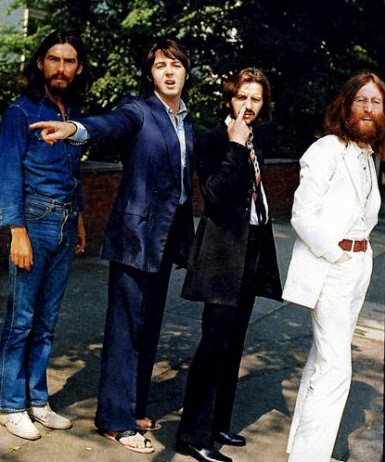 Almost immediately conspiratorialists saw the Abbey Road album cover as a funeral procession. Leading the procession is John dressed in white, symbolizing the clergy. Next comes Ringo, dressed in black like an undertaker. Paul, the presumed corpse, is third in line and walks out of step with the other Beatles, he is barefoot and his eyes are closed. George brings up the rear, dressed in work clothes the supposed gravedigger. Also, Paul is smoking a cigarette, also known as a “coffin nail”. The fact that he is holding the cigarette in his right hand, even though the “real” Paul McCartney was left handed, only added to the belief that this was an impostor posing as the dead bassist. 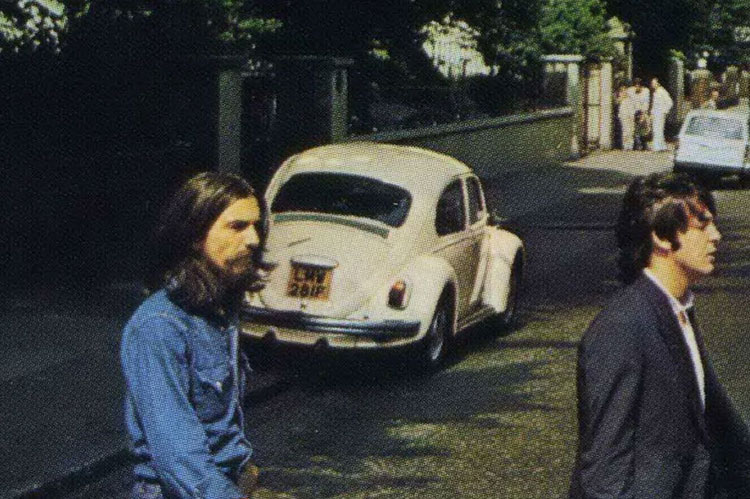 The death clues were not confined to the image of the lads in the crosswalk however. For behind the Beatles on the left side of the street is a Volkswagen Beetle with a license plate reading “LMW 28IF”, suggesting that Paul would have been 28 if he were still alive. Actually Paul would have been 27 when Abbey Road was released. This seeming miscalculation was explained away by the rumorists with the fact that Paul studied mysticism in the Near East. Most mystics believe we are all one year old at birth (counting the nine months of pregnancy) confirming that Paul would have been 28 IF he had lived!.” The first three letters on the license place, “LMW,” were interpreted as “Linda McCartney Weeps”. On the right side of the road is a police van, seen as a reference to the cover up of Paul’s death by police.

Perhaps as expected, the clues are not only confined to the front cover, for devoted clueseekers, many hidden secrets can be found on the back cover as well. To the left of the tiles spelling out “Beatles” are eight dots, which when connected form the number “3”, so the back cover actually reads “3 Beatles”. Also, there is a crack in the “S” at the end of “Beatles”. Some say that to the right of the tiles is an odd shadow that looks like a skull.
The woman walking by is supposedly Jane Asher, Paul’s girlfriend at the time of the accident, who was supposedly paid to keep quiet about the whole matter. The rumor also states that if you look at her elbow from a distance, the silhouette of Paul McCartney’s profile appears. The songs themselves of course hold clues to Paul’s demise in the lyrics. In “Come Together” the line “One and one and one is three” hints that there are three Beatles instead of four. And of course, “Golden Slumbers” and “The End” are easily open to macabre interpretation.
As previously stated, although recorded before Abbey Road, the last album the Beatles released was Let It Be. In the track “The Long and Winding Road” on Let It Be, Paul can be heard singing tearfully, as if he knows he is already dead. In the lyrics of the title song, “Let It Be”, Paul’s lyrics allegedly hint that everyone should “let it be” and accept the fact that is he dead once and for all. The mention of “Mother Mary” in the song confirms that Paul is dead, as the Bible indicates the she stands at the gates of heaven beside St. Peter. Lastly, the track “The Long and Winding Road” is said to be a reference to the road that led to Paul’s decapitation.

Finally, on the “Let It Be” cover, the album cover is black. Said to symbolize the end, or death, of the Beatles. Or maybe it was to symbolize the death of a Beatle? The background squares of John, George, and Ringo’s photos are all adorned in white. While Paul’s square is depicted with a blood red background. Also, Paul is shown facing forward rather than in three-quarter profile. Another indication of Paul’s death is seen by the fact that he grew a beard, seen by some religions as a sign of death and mourning. The rest of The Beatles’ beards are clues as well, as they all indicate that the three surviving members are in mourning for their lost bandmate.

On November 7th, 1969 Life Magazine ran an interview with Paul McCartney at his Scottish farm. Paul spoke about the various “death clues” including the OPD badge on his Pepper suit (which fans took to mean “Officially Pronounced Dead”), his black flower in Magical Mystery Tour, and his barefooted appearance on the Abbey Road album cover. Paul was quoted as saying, “It is all bloody stupid. I picked up that OPD badge in Canada. It was a police badge. Perhaps it means Ontario Police Department or something. I was wearing a black flower because they ran out of red ones. It is John, not me, dressed in black on the cover and inside of Magical Mystery Tour. On Abbey Road we were wearing our ordinary clothes. I was walking barefoot because it was a hot day. The Volkswagen just happened to be parked there.”
Paul continued, “Perhaps the rumor started because I haven’t been much in the press lately. I have done enough press for a lifetime, and I don’t have anything to say these days. I am happy to be with my family and I will work when I work. I was switched on for ten years and I never switched off. Now I am switching off whenever I can. I would rather be a little less famous these days. I would rather do what I began by doing, which is making music. We make good music and we want to go on making good music. But the Beatle thing is over. It has been exploded, partly by what we have done, and partly by other people. We are individuals – all different. John married Yoko, I married Linda. We didn’t marry the same girl. The people who are making up these rumors should look to themselves a little more. There is not enough time in life. They should worry about themselves instead of worrying whether I am dead or not. What I have to say is all in the music. If I want to say anything I write a song. Can you spread it around that I am just an ordinary person and want to live in peace? We have to go now. We have two children at home.”
Ringo dismissed the rumors as “a load of crap.” George never publicly spoke about the PID rumors. John proclaimed, “No. That was bullsh*t, the whole thing was made up.” But Paul had the last word on the rumors of his death. The cover of McCartney’s 1993 album “Paul Is Live” shows him with his dog on the famous Abbey Road crosswalk, obviously poking fun at the rumored funeral procession of nearly a quarter century before. In the background, once again, a Volkswagen Beetle is parked at the side with the license plate reading “51 IS”. Rather than being dead in his twenties, Paul was still alive and making music at age 51.

As for the Abbey Road cover design, a photograph of The Beatles traversing a zebra crossing; it was based on sketched ideas by McCartney himself. The photo was taken from atop a step-ladder on August 8, 1969 outside EMI Studios on Abbey Road at 11:30 in the morning. Photographer Iain Macmillan was given only ten minutes to take the photo while policeman held up oncoming traffic.
The white Volkswagen Beetle belonged to one of the people living in the block of flats across from the recording studio. After the album was released, the car’s license plate (LMW 281F) was stolen repeatedly by adoring fans. In 1986, the car was sold at auction for $ 3,795.00 and in 2001 the VW Beetle was put on display in a German museum. The man standing on the pavement to the right of the picture is Paul Cole (1911-2008), an American tourist unaware he had been photographed until he saw the album cover months later. 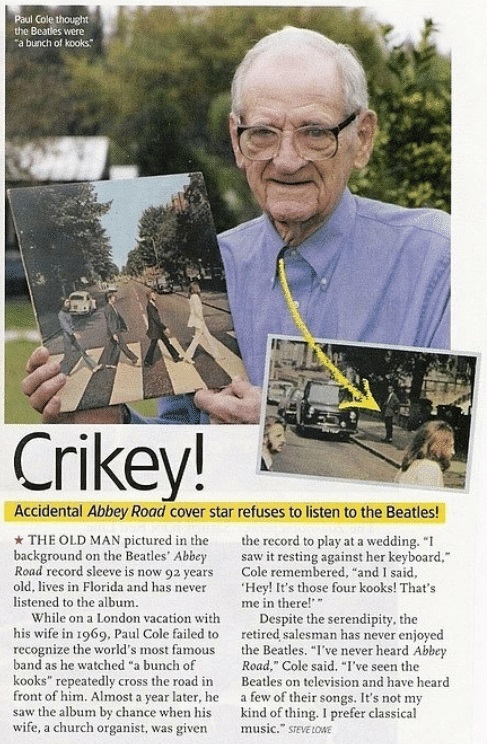 Cole, a Florida salesman, was on vacation with his wife, who wanted to go see “yet another museum.” Mr. Cole decided to wait outside on the north London thoroughfare. Cole watched as photographer Iain McMillan stood on a stepladder in the middle of the street, photographing the four Beatles as they walked, single-file, across Abbey Road. The entire shoot lasted 10 minutes. “I just happened to look up, and I saw those guys walking across the street like a line of ducks,” Cole remembered. “A bunch of kooks, I called them, because they were rather radical-looking at that time. You didn’t walk around in London barefoot.”
The image of the Beatles on the crossing has become one of the most famous and imitated in recording history. The crossing is a popular destination for Beatles fans and there is a 24-hour-a-day webcam aimed at it. Undoubtedly, in years to come some ghost group or spiritual investigation team will claim to see the ghost of John or George trodding across the stripes once more. As for Sir Paul McCartney, he’ll do his best to delay that walk for as long as he can.