It was Saturday, October 31, 1903. The college football season was half over as the Purdue Boilermakers geared up for their annual in-state rivalry game against Indiana University. (The “Old Oaken Bucket” trophy was still 20 years in the future.) The rivalry had started a dozen years before in 1891 and for awhile it looked like a clean sweep for the Purdue squad with the Boilers taking the first 6 games outscoring the boys from Bloomington 227 to 6. Then I.U. reeled off 3 in a row to shock the West Lafayette faithful before Purdue took the 1902 contest by once again swamping the cream & crimson 39-0.
The competition for gridiron glory between these two in-state titans was so hot and intense that, for the 1903 contest, both schools agreed that games should be held on neutral ground to quell “potential hooliganism” on the part of the students and fans. To this point eight games had been played in West Lafayette and two in Bloomington. In the spirit of fair play, officials from both schools decided to play the 11th contest on a neutral field at Washington Park in Indianapolis. Washington Park was located at 3001 East Washington Street where it meets Gray Street (in the southwest corner of that intersection). The ballpark, built in 1900 just a stone’s throw from Irvington, was home to the 1902 defending American Association champion Indianapolis Indians.

To get to the new state capital location, both teams joined what seemed like the entire student body as they piled into separate special service trains to travel to the game from north and south of the city. Two special trains, operated by the “Big Four Railroad” (the Cleveland, Cincinnati, Chicago and St. Louis Railway), were chartered to carry over 1,500 passengers from Lafayette to Indianapolis for the annual rivalry game. Purdue’s team train was cobbled together like a patchwork quilt and included modern steel streamliner coaches coupled to older wooden coaches. The Boilermakers football team rode in the wooden cars at the front of the train procession. 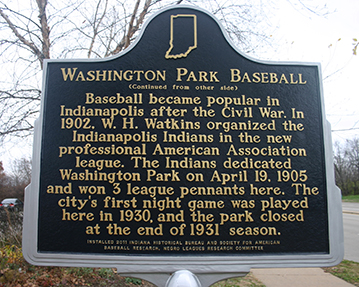 The train was traveling on what would have been the 101st birthday of school founder and namesake John Purdue (born October 31, 1802). Purdue, a wealthy landowner, politician, educator and merchant, was the primary benefactor of the University. In 1903, if you wanted to get to Indianapolis from either school, you had three choices: ride a horse and buggy, walk or take the train. Since these were the days before automobile travel was popular, train travel was the most widely accepted form of transportation.
It was Halloween in 1903; late October in the Hoosier Heartland. It is hard for our modern sensibilities to imagine those pre-electricity rural landscapes dotted by farmhouses scattered in a wide swath like checkers on a checkerboard. In this era, Hoosiers generally lived in small communities and held tight to their neighbors. News traveled slowly and so did the traffic. As the Gilded age of Mark Twain collided with the Progressive Era of Teddy Roosevelt, it became apparent that something’s gotta give. Safety was an issue in this gargantuan game of rock, paper, scissors where iron and steel trumped wood every time.

In West Lafayette, it was a festive atmosphere and the town was buzzingly, excited for the match up against the Hoosiers. Like I.U.’s Bloomington, West Lafayette draws so much of its identity from their University and the entire community was looking forward to the weekend. Purdue was 4-2 on the season with a big win over rival Wabash College, but losses to Chicago and Illinois. Purdue enjoyed a 7-3 overall advantage in the series against I.U. and was feeling confident. Running at the rate of thirty miles an hour, the John Purdue Big Four special was carrying 954 students and spectators, including the football team, University President and star fullback and team captain Harry “Skillet” Leslie. 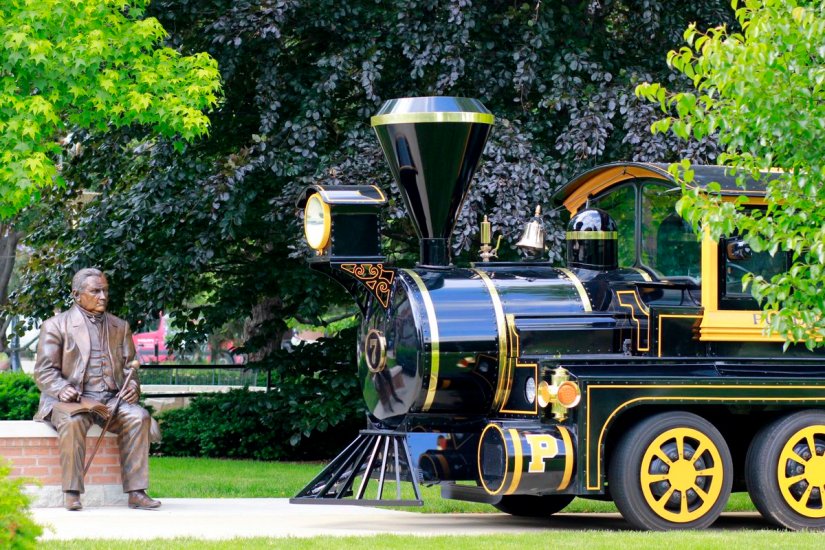 Unlike the raucous fans traveling in the 13 plush, modern streamliner train coaches behind them, the Boilermakers team traveled in relative silence, focusing on the task at hand, mentally preparing for their upcoming rivalry game in the cozy confines of an older wooden train car. Unfortunately, the athletes had no idea that a minor mistake would lead to a major disaster. Railroad protocol specified that “Special” trains operate independent of the regular schedule. Timing was everything in the railroad game.
In the early 1900s, the rail service depended on many human components: conductors and their assistants, dining car stewards, ticket collectors, train baggage men, brakemen, and train flagmen on the vehicle itself and yardmasters, yard conductors, switch tenders, foremen, flagmen, brakemen, switchmen, car tenders, operators, hump riders, and car operators on the ground. In 1903, railroad track “switches” were manually operated by lantern carrying tenders fluent in the language of railway lantern semaphore, which, strictly defined, means the act of waving a lantern as a warning.

Switch tenders communicated with brakemen who most often stood atop boxcars waving happily at his railyard cohorts and locals as the train glided past. As the train traveled down the rails, some of these daredevils ran along the top of the cars, adjusting the brake wheels sticking up from each car as they went. The complexities of switching, congestion, and rearranging cars made freight yards a far more perilous workplace and working on a moving train could be downright treacherous. One railyard superintendent, when talking about his workers, once famously said, “Men are cheaper than shingles. . . There’s a dozen waiting when one drops out.”
The trouble was, this apparent dispensability of railway workers could cause havoc in areas where tracks needed to be switched to avoid collisions. As the Purdue Special steamed towards the Circle City at over 30 miles per hour, a clerk up the line from Lafayette failed to inform the yardmaster near 18th Street in Indianapolis that the trains were coming. The first train, carrying the team, rounded a curve at the Mill Street Power House and saw a coal train being pushed back on the tracks. The engineer immediately slammed the engine in reverse, locked the emergency brake, and leapt off the moving train. 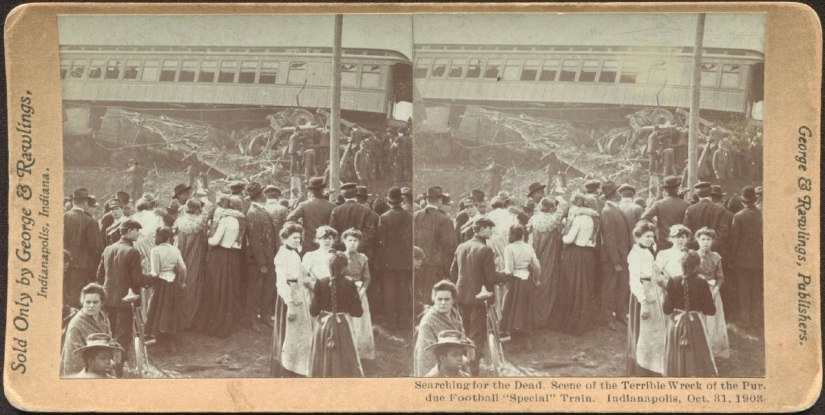 The Boilermakers never knew what hit ’em. The engine slammed into the coal car, splintering apart the first few cars while folding like an accordion. When the two trains collided, the lead car hit the debris, causing it to shoot into the air. This gave the full impact to the second train car, causing all the deaths. The wooden train cars splintered like kindling and were destroyed, and the adjacent cars careened violently off the elevated tracks, tumbling to the ground below like jack straws. 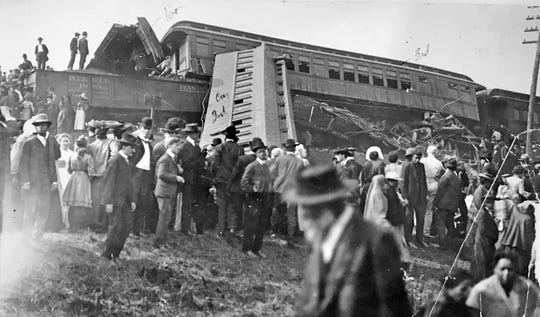 The Indianapolis star reported, “The trains came together with a great crash, which wrecked three of the passenger coaches, in addition to the engine and tender of the special train and two or three of the coal cars. The first coach on the special train was reduced to splinters. The second coach was thrown down a fifteen-foot embankment into the gravel pit and the third coach was thrown from the track to the west-side and badly wrecked. The coal cars plowed their way into the engine and demolished it completely. The coal tender was tossed to the side and turned over. A wild effort on the part of the imprisoned passengers to escape from the wrecked car followed the crash. Immediately following the wreck the students and the others turned their attention to the work of rescuing the injured, and by the time the first ambulances arrived many of the dead and suffering young men had been carried out and placed on the grass on both sides of the track.” 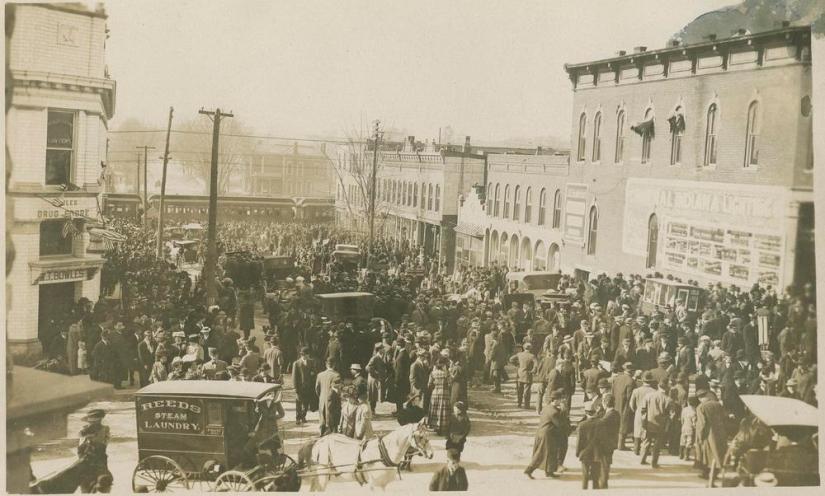 The fans at the rear of the train were unaware of what happened and only felt a slight jolt as the train came to a sudden stop. These rearmost passengers wasted no time in coming to the assistance of the victims up ahead. The erstwhile revelers skidded to a stop at the scene of carnage and were horrified at the devastation before them. Acts of unselfish action made heroes out of athletes and ordinary people alike.
According to Purdue student Joseph Bradfield who was riding in the procession, “We began carrying the people out, the injured ones. There was a line of horse-and-buggies along the whole stretch there for half a mile. We didn’t stop for ceremony; we simply loaded the injured people into the buggies and sent the buggies into town, got them to a hospital…There was no ambulance, no cars…” 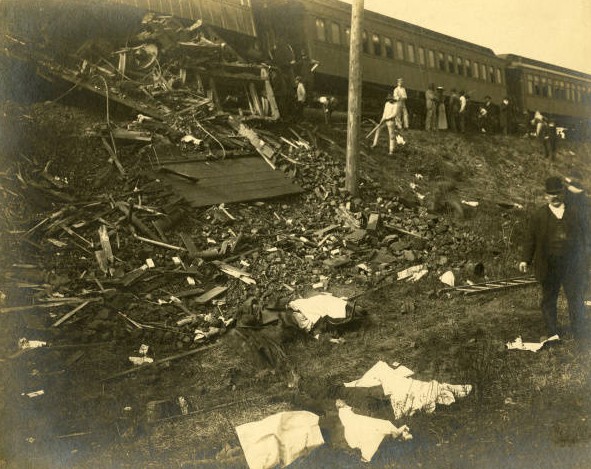 Seventeen passengers in the first coach were killed. Thirteen of the dead were members of the Purdue football team. Walter Bailey, a reserve player from New Richmond, although grievously injured, refused aid so that others could be helped. Team Captain Skeets Leslie was covered up for dead, his body transported to the morgue with the others. It was the first catastrophe to hit a major college sports team in the history of this country. The affects would be felt for decades to come and one of those players would rise from the dead, shake off accusations of association with Irvington KKK leader D.C. Stephenson, and lead his state and country through the Great Depression.