In just a couple of months, it will be 55 years since Elvis Presley starred in his second film, a film called “Loving You.” The film was noteworthy for a few different reasons; it was Elvis’ first movie in color, it featured his mother and father as audience members and it was for this film that Elvis dyed his hair from a sandy blonde to jet black to honor the King’s movie idol, Tony Curtis. It premiered on July 10, 1957 in Memphis and was released nationally on July 30, 1957. Elvis did not attend the inaugural showing in his his hometown, choosing to watch the film with his parents, Gladys and Vernon, at a private midnight showing screening instead. At one point, Elvis and his parents appear on screen together in a concert scene. His mother would die a year later and Elvis refused to watch the film again because it would remind him too much of his dear departed mother.

The film was the first of many portraying Elvis as a rising young music star and how that sudden stardom affected the character and those around him. An ominous portent of things to come in the life of Elvis Presley to be sure. The film starred Elvis alongside Wendell Corey, Lizabeth Scott and a young starlet named Dolores Hart. Some believe the film was cursed, pointing to the sad end of Elvis Presley 20 years later at the young age of 42, the sudden retirement of popular baritone blonde Lizabeth Scott after filming concluded, the decline and alcohol induced death of Wendell Corey just over a decade later and the fact that Dolores Hart quit acting and became a nun. Yes, the same beautiful actress who made 10 films in 5 years alongside heart throbs like Montgomery Clift, Warren Beatty, George Hamilton, Robert Wagner and, of course, Elvis became, and still is today, a Roman Catholic nun.
Hart (born Dolores Hicks on October 20, 1938 in Chicago, Illinois) was the only child of Catholic parents who separated and ultimately divorced, when she was just 3-years-old. Dolores was not raised Catholic, but was converted to Catholicism at the age of 10. Her parents were both actors and Hart described herself as a “Hollywood Brat”, following her actor father, Bert Hicks, around the back studio lots of Tinseltown and deciding at a young age that she wanted to be in movies. Instead, her father sent the precocious young girl to Chicago to live with her grandparents where she attended parochial school and “Dodged streetcars.”
Although far from the bright lights of Hollywood, her movie theater projectionist grandfather imparted his love for films and encouraged her dream of pursuing an acting career. Dolores would accompany her grandfather to the theatre and sit all day in the projection booth watching the films (without sound so as not to disturb his naps in the booth) and only wake him when it was time to change the reel. She studied theatre at Marymount College and in 1956 was signed as a “fresh, new face” to play the love interest of Elvis Presley in “Loving You.” Dolores, attended Mass every morning as a young actress in Hollywood and prayed to get roles she wanted. Her prayers were answered when Hart appeared again with Presley in 1958’s King Creole. Elvis was well known for his many off-screen affairs with his female costars, but Hart has always denied succumbing to Presley’s charm.

When asked, “What is it like kissing Elvis?” Hart always chuckles and replies, “I think the limit for a screen kiss back then was something like 15 seconds. That one has lasted 40 years.” In 1960, Hart ironically starred in “Where the Boys Are”, a teenage comedy about college students on spring break which has become a cult classic for film buffs. In the film, Hart plays a co-ed who struggles with her newly-developed sexuality and the sudden attention from the opposite sex. It was during filming of “Francis of Assisi” the next year in 1961, in which she prophetically played a nun, that she met Pope John XXIII. As she met his holiness, she exclaimed, “I am Dolores Hart, the actress playing Clare.” To which the Pontiff replied, “No, you are Clare!” (“Tu sei Chiara” in Italian).
Dolores first visited Regina Laudis, after an exhausting run on Broadway. A friend suggested she recuperate for a few days in the quiet of the abbey, so she went, and continued to visit periodically. On one of those visits, Ms. Hart spoke to the then-abbess about becoming a nun. The abbess told her she was too young and that she should go back and continue acting. She went on to star in four more films and became engaged to architect Don Robinson, who set to work designing the couple’s Hollywood dream home. A lavish wedding was being planned, complete with a wedding gown designed by legendary Hollywood costume designer Edith Head. It was then that a fortuitous letter arrived from the convent suggesting that if she was still interested in joining the order, now was a good time to do so. 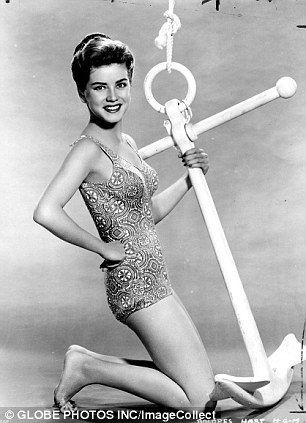 In 1963, she broke off her engagement and the 25-year-old actress joined the Benedictine Abbey of Regina Laudis in Bethlehem, Connecticut as a Roman Catholic nun. She would ultimately become the Prioress of the Monastery. Legend claims that while on the final leg of a promotional tour for her last movie, “Come Fly with Me” starring Hugh O’Brian, Ms. Hart literally stepped out of a Hollywood limousine and into the abbey.
Sister Dolores took her final vows in 1970. She chants in Latin eight times a day. In 2006, she visited Hollywood again after 43 years in the convent to raise awareness for peripheral idiopathic neuropathy disorder, a neurological disorder that afflicts many Americans, including herself. At first, the condition, which affects a person’s ability to walk, went undiagnosed and left her wheelchair bound. For a time, Sister Dolores thought she was going to die. Finally a New York City doctor discovered a treatment that eased her symptoms and has helped restore her ability to walk. On April, 2006, she testified at a Washington congressional hearing on the need for research on the painful and crippling disease that affects the central nervous system. That suffering taught Mother Dolores an important lesson. She said, “You have to become dependent on the gift of human beings, and you discover that God is an incarnate reality. In the beginning, God was always a pie-in-the-sky reality. Now I had to realize that Jesus was there through the people who were assisting me, caring for me and doing the things that were bringing me through.”

Hart, whose pure beauty was often compared to Grace Kelly, used her movie fame to develop her Abbey of Regina Laudis’s expansion of its community connection through the arts. Paul Newman donated funds from his “Newman’s Own” food line to build a lighting grid and a better equipped stage for use in a year-round arts school at the Abbey. Another friend, Academy Award winning actress Patricia Neal also helped support the abbey’s theater.
Dolores Hart’s ultimate vision is the development and expansion of the Abbey’s open-air theater and arts program for the Bethlehem community. Every summer, the abbey’s 38 nuns on 400 acres of rural land, help the community stage a musical. Past performances have included West Side Story, Fiddler on the Roof, The Music Man and My Fair Lady. Although the Reverend Mother Dolores Hart has been Prioress of the Abbey since 2001 and has not appeared in a Hollywood movie for almost half-a-century, she remains a voting member of the Academy of Motion Picture Arts and Sciences. A designation that makes her the only nun to be an Oscar-voting member giving her a vote to help determine each year’s Oscar winners. She watches the movies on screener DVDs and invites her fellow nuns to see the good ones. 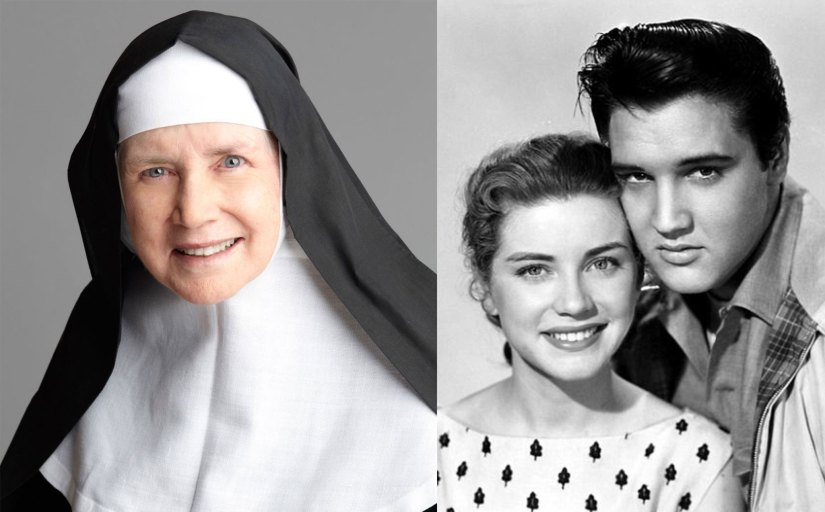 In 2012 Benedictine nun Mother Prioress Dolores made a rare foray from her isolated life at the Abbey of Regina Laudis and traveled from her Connecticut home to Hollywood to celebrate an Oscar-nominated HBO documentary film titled, “God Is Bigger Than Elvis”. The film chronicles her life as an actress and a nun, including her close friendship with spurned fiancé, Don Robinson, who never married and who has visited Sister Dolores at the Connecticut monastery faithfully. One of the most touching moments in the film features Robinson and Prioress Dolores casually talking, Robinson referring to Hart as “Mother” while looking, and acting, like a typical elderly married couple. The scene takes on added significance when you realize that Don Robinson died shortly after the film was made, ending a platonic love affair that lasted a half a century.