Last week I wrote of Irvington namesake Washington Irving’s connection to the author most associated with the Victorian Era, Charles Dickens. While nearly everyone is familiar with Dickens classic seasonal ghost story, “A Christmas Carol”, not many have experienced the magic of a Washington Irving Christmas tale. Although Irving lived a portion of his life as a European vagabond meticulously chronicling the customs, traditions and lore that was fast fading away from the centuries old landscape, he is best remembered today for his American folklore stories like Rip Van Winkle and Ichabod Crane.
For decades, Irving’s description of traditional English Christmas celebrations that influenced nearly every author that came after him were thought to have been formulated and influenced by parties and gatherings he had personally attended. However, its closer to the truth to say that Irving’s Christmas stories were not solely based on any holiday celebration he had attended, but rather many were accounts intentionally created by the imagination of Irving himself. In other words, Washington Irving’s masterful prose influenced generations of experts and historians through the power of his superior skill of embellishment. 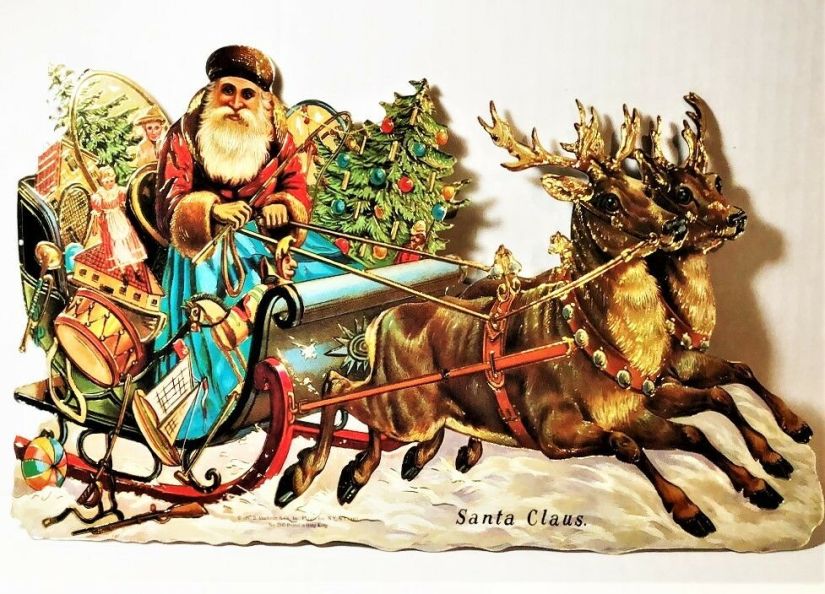 In 1808, Irving created an updated version of Old St. Nick that rode over the treetops in a horse-drawn wagon “dropping gifts down the chimneys of his favorites.” Irving described Santa as a jolly Dutchman who smoked a long-stemmed clay pipe and wore baggy breeches and a broad-brimmed hat. Irving’s work also included the familiar phrase, “laying a finger beside his nose” some 14 years before a Troy, New York newspaper published the iconic children’s poem “Twas the night before Christmas,” which turned Santa’s wagon into a sleigh powered by reindeer.
Irving describes St. Nicholas’ holiday activities by saying, “At this early period was instituted that pious ceremony, still religiously observed in all our ancient families of the right breed, of hanging up a stocking in the chimney on St. Nicholas eve; which stocking is always found in the morning miraculously filled; for the good St. Nicholas has ever been a great giver of gifts, particularly to children.” These descriptions were first published as observances of New York’s old Dutch tradition. His “Old Christmas” tales, first published in 1820, are among the earliest popular accounts of 19th century English Christmas customs, many of which would soon be adopted in the United States and remain familiar to us today.

Irving’s stories are full of mistletoe and evergreen wreaths, Christmas candles and blazing Yule logs, singing and dancing, carolers at the door and the preacher at the church, wine and wassail, and, of course, the festive Christmas dinner. The description of Old Christmas as Irving experienced it in “Merrie Olde England,” helped to popularize these traditions in his native land.
The modern day reader might not realize it but Irving’s descriptions of his own Christmas vision were a subtle form of protest. In an era when our new nation was busy finding its own footing, barely two decades after the writing of the American Constitution, Irving’s first formations of the “New” Christmas were created in an attempt to pull the religious holiday away from the churches and government buildings and take it back where he felt it belonged, with the people. Irving describes it thusly, “Even the poorest cottage welcomed the festive season with green decorations of bay and holly…the cheerful fire glanced its rays through the lattice, inviting the passenger to raise the latch, and join the gossip knot huddled around the hearth, beguiling the long evening with legendary jokes and oft-told Christmas tales.” Irving, ever the bard, also wrote, “At Christmas be merry, and thankful withal. And feast thy poor neighbours, the great and the small.”
Irving’s work was our fledgling country’s first introduction to Christmas tradition and, although many of them survive to the present day, some have morphed into modern versions slightly different from those described by Washington Irving. The mistletoe is still hung in farmhouses and kitchens at Christmas; and the young men have the privilege of kissing the girls under it, plucking each time a berry from the bush. When the berries are all plucked, the privilege ceases. 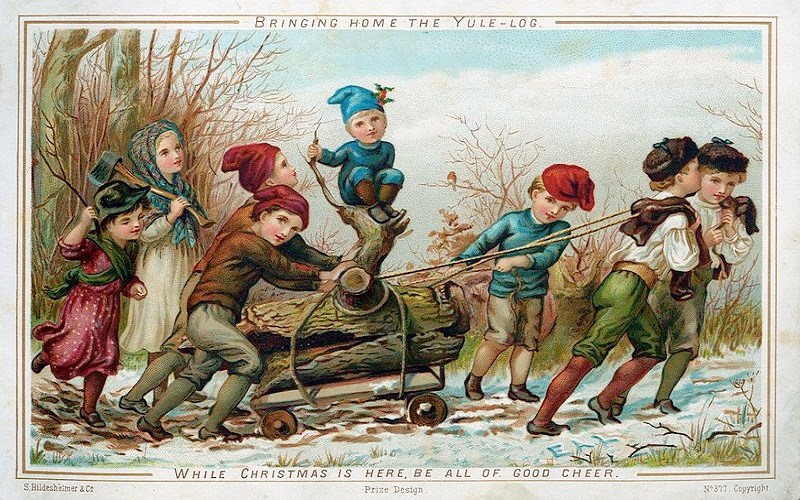 The Yule-log is a great log of wood, sometimes the root of a tree, brought into the house on Christmas eve, laid in the fireplace, and lighted with a piece of last year’s log. While it burned there was great drinking, singing, and telling of tales. The Yule-log was to burn all night; if it went out, it was considered bad luck. If a squinting person come to the house while it was burning, or a barefooted person, it was considered bad luck. A piece of the Yule-log was carefully put away to light the next year’s Christmas fire.
Washington Irving profoundly influenced the modern day American Christmas in two distinct ways. First, his reinvention of jolly St. Nick into a gift toting ambassador gave hope to every child across the land. Second, the timing of the Christmas holiday during an other wise bleak wintry season offered an emotional waymark to a cabin-fever populace, both young and old. Within a decade of the publication of Irving’s Christmas “Sketch Book,” Americans were greeting each other with “Merry Christmas” wishes, and stores on main streets across America extended their hours to accommodate holiday shoppers.
So remember, this Christmas weekend, as you gather together with friends, loved ones and family to celebrate holiday traditions, think of Washington Irving, America’s Father Christmas.