Al Franken resigned this week. The Democratic Senator from Minnesota left office under a cloud of sexual misconduct accusations that surfaced in the autumn of last year. It was the end of a fairytale career by the former Saturday Night Live comedian who first came to Washington DC after a narrow victory in 2008. Narrow might be too tame a word to describe Franken’s surprise win. He won his seat by the scant margin of 312 votes out of nearly three million votes cast. I asked then, and with the news of Franken’s resignation, I will ask again, what’s the matter with Minnesota?

I am a native Hoosier who has followed politics all my life. I know that, in the arena, Midwestern states follow observational patterns that earn reputations. Indiana is the cradle of Vice-Presidents, Ohio is the home of Presidents, Illinois Governors go to prison and Minnesota elects unconventional candidates. I guess when you are talking about the state that gave us Prince, Bob Dylan, Judy Garland, Charles Schulz, F. Scott Fitzgerald, Roger Maris, Wolfman Jack, Jane Russell, Billy Graham, Charles Lindbergh, Monty Python’s Terry Gilliam, Dr. Demento. Fred Zollner of the Zollner Pistons, unconventional may be the watchword. Don’t forget, Minnesota was also home to Paul Bunyan, the Jolly Green Giant and Rocky and Bullwinkle. 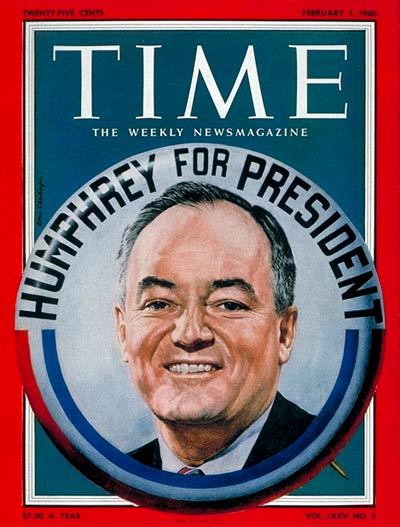 To be sure, Minnesota has given us very normal politicians like Lyndon B. Johnson’s Vice-President Hubert H. Humphrey and Jimmy Carter’s Vice-President Walter Mondale and Senator Eugene McCarthy. All 3 men ran for President (Humphrey and McCarthy against each other in 1968) and all 3 men lost. Although mainstream, all 3 were unconventional in their own ways. McCarthy was the grandfatherly looking darling of the Anti-Vietnam War Hippy protesters, most of whom were one third his age. Humphrey was a peace seeking dove who became the hawkish voice of the LBJ administration during the Vietnam War. And Mondale was the first to chose a woman as his running mate (Geraldine Ferraro 1984).

You may not realize just how prolific Minnesota has been in baby boomer’s collective national political conversation until you realize that Mondale, McCarthy or Hubert Humphrey were on the Democratic ticket as candidates for President or Vice President in the 1964, 1968, 1972, 1976, 1980, 1984, 1988 and 1992 elections. Minnesota is known for a politically active citizenry, with populism being the driving force among the state’s political parties. Minnesota has consistently high voter turnout, in the 2008 U.S. presidential election, 77.8% of eligible Minnesotans voted – the highest percentage of any U.S. state or territory – versus the national average of 61.7%.
To understand what’s wrong with Minnesota, we must first understand the North Star State’s Democratic party. But, although Humphrey, McCarthy, Mondale and Franken were all elected as Democrats, officially, Minnesota does not have a Democratic Party. In Minnesota, the party goes by a different name: the Democratic-Farmer-Labor Party, or DFL for short. Formed by a merger of the Minnesota Democratic Party and the social democratic Minnesota Farmer–Labor Party in 1944, Minnesotans claimed that although their state may have space for a thousand lakes, there wasn’t room for two left-of-center political parties. Although the Farmer-Labor Party achieved great success in the state, electing a number of statewide candidates, including the rabble-rousing Gov. Floyd Olsen, Minneapolis mayor Hubert H. Humphrey and Minnesota Attorney General Walter Mondale, the party eventually merged with the Democrats. Today, Minnesota Democrats identify themselves as “DFLers”

The history of Minnesota electing non-conventionals goes back to 1876 when the state elected John Pillsbury as their 8th Governor. Name sound familiar? Yes, he was the namesake of the Pillsbury doughboy and served from 1876 to 1882. He died in 1901. Following the food theme, Minesota also elected Frank B. Kellogg tot he Senate in 1916. No, he wasn’t the cereal guy, but he did become Secretary of State, British Ambassador and a Nobel Prize winner in 1929.

Then came (and came-and came-and came) Harold Stassen, Minnesota Governor (it’s youngest ever) from 1939 to 1943. Stassen was a candidate for the Republican Party nomination for President nine times between 1944 and 1992 (1944, 1948, 1952, 1964, 1968, 1980, 1984, 1988, and 1992). He never won the Republican nomination, much less the presidency; in fact, after 1952, he never even came close, but continued to campaign actively and seriously for President until just a year before his death. When you add Stassen’s name alongside those of McCarthy, Mondale and Humphrey, a Minnesotan was on the ballot for every Presidential election for six decades.

Then came Jesse Ventura. The former navy seal turned pro wrestler known as “The Body” was born James George Janos in Minneapolis in 1951. In the Minnesota gubernatorial election of 1998 he was elected the 38th Governor of Minnesota and served from 1999 to 2003 but did not seek a second term. Ventura ran as a candidate for the Reform Party of Minnesota. Ventura went on to gain the highest approval rating of any governor in Minnesota history, with some polls ranking his public approval as high as the 73% in 1999. Ventura is widely regarded as one of the first candidates to effectively use the Internet in a national political campaign.
The last name on my list of unconventional Minnesota candidates is the very first name mentioned in this article: Al Franken. Alan Stuart “Al” Franken (born May 21, 1951) first gained notoriety in the 1970s and 1980s as a writer and performer on Saturday Night Live. Franken, along with his stand up partner Tom Davis, was one of the original SNL writers back in 1975. Born in New York City, Franken moved to the Twin Cities after attending Harvard College. Franken received seven Emmy nominations and three awards for his television writing and producing but his most famous character was self-help guru Stuart Smalley.
Franken has acknowledged using cocaine and other illegal drugs while working in television, stating that he stopped after John Belushi died of an overdose in 1982. In 1995, Franken left the show in protest over losing the role of Weekend Update anchor to Norm Macdonald. In 1995, Franken wrote and starred in the film Stuart Saves His Family, based on his SNL Stuart Smalley character. The film was a flop and its aggregate rating of 30% on Rotten Tomatoes is one of the all-time lowest.

Franken then hosted a nationally syndicated, political radio talk show, The Al Franken Show, and authored six books, four of which are political satires critical of conservative politics. The success of his radio show and books led Franken to run for the U.S. Senate. Franken’s narrow victory was challenged but upheld. The most famous incident that emerged revolved around a ballot that would come to epitomize Franken’s victory. It was a ballot that had been marked twice, once for Franken and once for a write-in candidate known as “Lizard People.” This ballot gained infamy, not only for the absurd nature of a vote being cast for Lizard People but also for whether it should be counted for Franken or for lizard people. Eventually, the ballot was thrown out altogether. Franken was sworn into the Senate on July 7, 2009 (seven months after the congressional session had started) and was re-elected to a second term in office in 2014.
How can this state of 5.5 million people resting closer to Canada than Washington DC be so politically relevant yet so quirkily unconventional? Minnesota is the 12th largest but only the 21st most populated, dontcha know. Minnesota is made up of 13,136,357 acres of total surface water, more area than the size of Hawaii and New Jersey combined, yet they can claim more golfers than any other state in the union. Uff da! The Gopher state’s official bird is a loon, Skol! So, seriously, what is the matter with Minnesota? The world may never know. One thing’s for sure, Minnesota has led the league unorthodox political relevancy for most of our lives. Do I think that reputation will continue in the 21st century? You betcha.