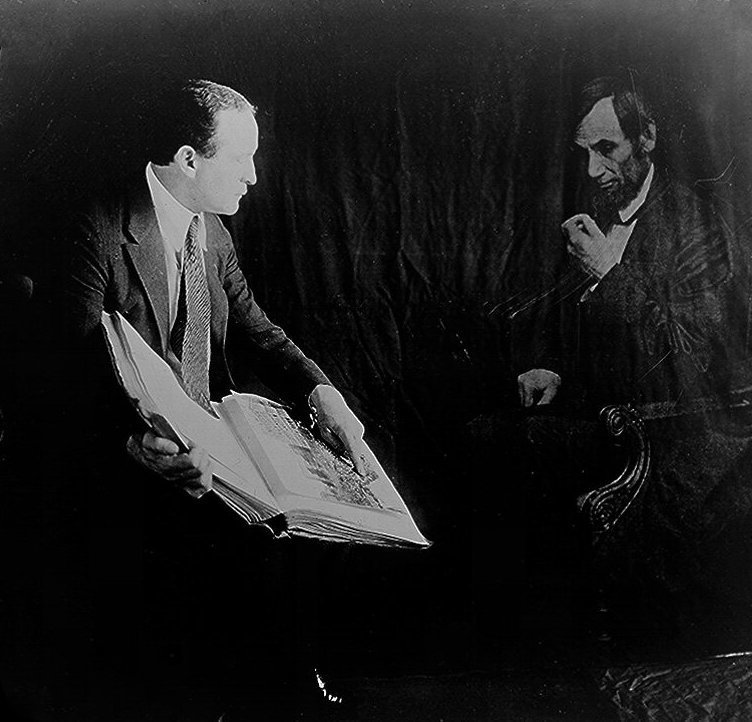 Magician Harry Houdini had a very unlikely boyhood hero. A hero adored by a generation before Houdini’s 1874 birth and a hero worshiped by generations hence. Harry Houdini’s hero was Abraham Lincoln. Houdini’s devotion to Lincoln could be found on stage during his shows. He traveled with a pet eagle named ‘Josephus Daniel Abraham Lincoln’ or ‘Abe Lincoln’ for short. Houdini’s eagle would materialize at the end of his Whirlwind of Colors routine culminating in a wild frenzy of scarves and other fabric pulled from a small container. 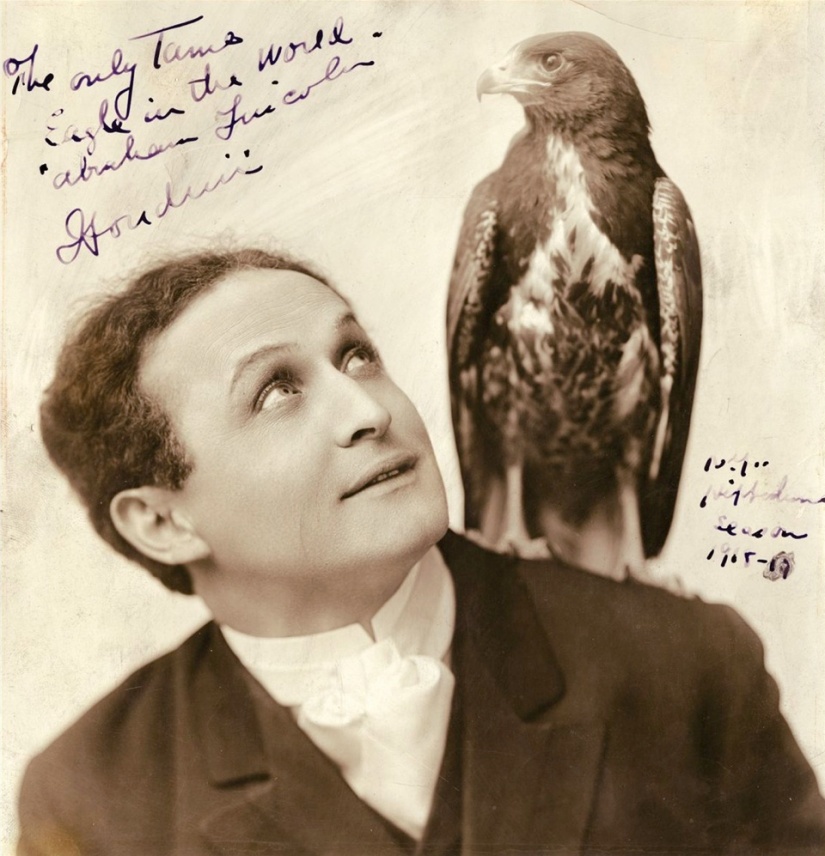 In Kenneth Silverman’s 1996 Biography “Houdini!!!: The Career of Ehrich Weiss : American Self-Liberator, Europe’s Eclipsing Sensation, World’s Handcuff King & Prison Breaker”, the author relays how Houdini referred to Lincoln as “my hero of heroes.” Houdini claimed to have read every book about Lincoln by the time he was a teenager. In William Kalush’s 2006 biography “The Secret Life of Houdini: The Making of America’s First Superhero”, there is a story of young Houdini attending a seance where the medium produced a message from our 16th President. Houdini, Lincoln expert that he was, then asked a question to Lincoln via the medium and was puzzled when the answer that came back was not correct. This encounter led to Houdini’s early discovery that most Spiritualists were fake. 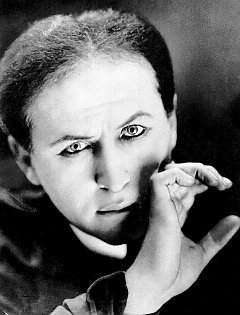 As he grew older and more financially secure, Houdini began to amass a personal collection of Lincoln memorabilia, particularly letters and autographs of the Great Emancipator. He also collected handwritten letters of every member of the assassin John Wilkes Booths family, several in response to letters sent by Houdini himself. Spending much of his adult life on the road, in hotels and traveling for days on ships and trains, Houdini became a prolific man of letters. One such letter survives that illustrates his desire and devotion to add to his Lincoln collection, despite the constraints of his vagabond lifestyle.
The letter is written on the magician’s personal “Lettergram” form that featured two portraits of Harry at the top. It was written in Milwaukee on September 20, 1923. Houdini’s pictorial Lettergram began with a printed message reading, “Please pardon any incivility in this letter. It has been rushed to you under stress of business and written in the dressing room. Therefore all formalities like Dear Sir, Dear Madame. etc. have been omitted, not to be curt or brusque; but that it is deemed better to let you hear from me in a lettergram of a few words than not at all.” The Lettergram was sent to Anton Heitmuller, a Washington businessman who billed himself as “Specializing in Selling Collections of Autographs, Manuscripts, Historical Broadsides and Curios”.

Heitmuller was peddling artifacts related to John Wilkes Booth along with a collection of items of Dr. Samuel Mudd, who was imprisoned for treating Booth’s broken leg after the assassination. Heitmuller saw a promotional opportunity for both he and Houdini in showing these materials; Houdini showed some interest but being at the height of his career, found it hard to find time to get to Washington to see the artifacts. Houdini’s typed letter reads, “I am on the road for the next four months, and there is a possibility of my reaching Washington about March or April. It all depends upon booking possibilities. Just rushing this to you to give you an outline of my route.” The note was signed in pencil by Houdini. Whether or not the meeting, let alone a purchase, ever took place is unknown, but the lettergram illustrates Houdini’s desire to acquire Lincolnania and the lengths he would go to find it.
Houdini became a friendly acquaintance of Abraham Lincoln’s son Robert Todd Lincoln. In one instance, a spirit medium claimed to possess authentic spirit photographs of Abraham Lincoln. Houdini sent copies of the photos to Robert Todd Lincoln and debunked them by proving that the images were manipulated from known photos of his father taken while Mr. Lincoln was still very much alive. To further prove his point, Houdini produced photos of himself alongside Mr. Lincoln. 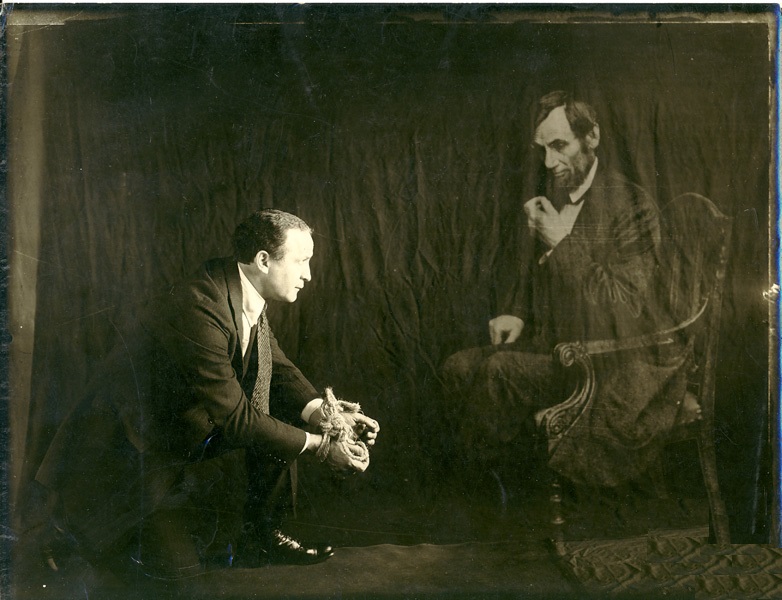 On Feb. 13, 1924, a day after the 115th anniversary of Abraham Lincoln’s birth, Houdini typed out a letter to Mary Edwards Lincoln Brown, the grand-daughter of Ninian and Elizabeth Edwards, Mary Lincoln’s sister. The letter, written from the dressing room of the State Lake Theatre in Chicago, Illinois, reads: “My dear Mrs. Brown: Enclosed you will find a Spirit Photograph of your renowned ancestor, and although the Theomonistic Society in Washington, D.C. claim that it is a genuine spirit photograph, as I made this one, you have my word for it, that it is only a trick effect. Mrs. Houdini joins me in sending you kindest regards, Sincerely yours, Houdini.” 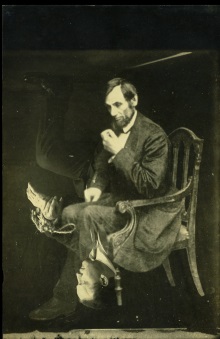 Furthermore, Houdini also produced ‘fake spirit messages’ from Lincoln during his lectures to debunk spiritualism. Many spiritualists attempted to back up their fake photos and messages by claiming that Abraham Lincoln himself was a devoted spiritualist who had held seances in the White House. As proof, they cited a piece of British sheet music, published while Lincoln was President, which portrayed Honest Abe holding a candle while violins and tambourines flew about his head. The piece of music was called The Dark Séance Polka and the caption below the illustration of the president read “Abraham Lincoln and the Spiritualists”.
Actually it was Mary Lincoln who consulted a series of mediums in a desperate attempt to contact their dead son Willie, who died in the White House. Houdini naturally pointed out that President Lincoln was in attendance for only one such “call to the dead” and then solely to support his grieving wife. After the seance, Lincoln gently guided Mary over to a window that looked out over Washington and pointed to the lunatic asylum with a warning that if she didn’t stop this foolishness, she would end up there.

Clues to Houdini’s admiration of Abraham Lincoln can also be found in a couple of the magicians he associated with. One was a former Civil War veteran named Harry Cooke who first took up magic as a means to entertain his fellow soldiers in camp. Legend claims that Cooke once showed Lincoln an escape from a piece of rope and the president was so impressed he put him to work as a Spy for the Union Army. Cooke kept a two dollar bill given him by Mr. Lincoln on another occasion when he was performing before the president and his cabinet. Amazingly Cooke was also present in Ford’s Theatre the night Lincoln was assassinated. Harry Cooke and Harry Houdini knew each other well and Houdini considered the elder magician as an early mentor. Many historians credit Cooke as being the first escape artist in America. Houdini, of course, became America’s greatest escape artist.

One final connection between Houdini and Lincoln is magician Signor Blitz. During the Civil War, Blitz performed at hundreds of Union Army Hospitals. His act was made up of several parts, including magic, ventriloquism, plate spinning and the command of trained birds. Blitz was apparently one of the first performers to use a dummy during his ventriloquism thereby setting the stage for future generations. His favorite trick was the Bullet Catching act (snaring a gun fired bullet between his teeth). However, a number of close calls persuaded the magician to remove it from his show. The final straw was when an audience member took out a six shooter and yelled “if you can catch one, you can call all of them!”. Fortunately, Blitz was able to stop the man from shooting.

Blitz once performed at a July 4th function where Lincoln and his son Tad were present. The incident took place near the Summer White House on the grounds of the Old Soldier’s Home in the Rock Creek section of DC, today it is known as Lincoln’s Cottage. Lincoln often used the cottage during the summer months to escape the brutal foggy bottom heat of the Executive Mansion. In early July of 1863, President Lincoln took a break from his duties to watch a rehearsal of the upcoming July 4th parade. Numerous people stood along the street watching the rehearsal, among them Signor Blitz.
The sly magician reached out and produced a bird from the hair of one of the girls in the parade. The rehearsal parade came to a sudden stop and now all eyes were on Blitz. Thinking fast on his feet, the magician quickly produced an egg from the mouth of a child standing nearby. Blitz had no idea that the child was none other than the President’s son, Tad Lincoln. Blitz was soon formally introduced to the President and one of the most remarkable impromptu conversations of the Civil War ensued. Lincoln surprised the magician by saying,”Why, of course, it’s Signor Blitz, one of the most famous men in America. How many children have you made happy, Signor Blitz?” The magician answered “Thousands and tens of thousands”. The President then dolefully replied, “While I fear that I have made thousands and tens of thousands unhappy. But it is for each of us to do his duty in this world and I am trying to do mine.”

This exchange took place just as the Battle of Gettysburg was winding down. Lincoln had not yet heard news about the outcome of the battle. What neither knew was the Union victory at Gettysburg, combined with the siege conclusion at Vicksburg, had just turned the tide of the war for the Union. Of course, Houdini was keenly aware of the connection between Blitz and Lincoln. After Harry Houdini died on October 31, 1926 in Detroit, Michigan, he was buried in Machpelah Cemetery in New York City. About a hundred yards away is the grave of Signor Blitz.