To many Hoosiers, summertime conjures up images of cozy family car trips spent searching for the odd and unusual sites that allow us all to forget about life for awhile while providing memories that will last forever. Don’t let today’s high gas prices keep you from enjoying that summer road trip. The average price for a gallon of gas hovers around $3.80—that’s lower than a month ago, but about a dollar more than last year at this time. Yes, gas expenditures can add up quickly, but don’t let that deter you from jumping in the car and driving all over our fair state.
Most of you know that I have a particular affinity for the Historic National Road. My love for the Road is rooted in the roadside Americana sights I remember from my childhood cleverly designed to draw my eyes towards them like a beacon on the horizon. I suspect that many of you can easily remember those larger than life roadside attractions that used to dot our cityscape like Mr. Bendo, the giant muffler man and the TeePee restaurants. Most of these old landmark roadside attractions have been torn down or rotted away, but a precious few still stand as a testament to a simpler era.

These unique roadside attractions began popping up along our highways in the 1930s and flourished into the 1960s. But the 1950s were their heyday. The Ike Era fifties was the decade of car culture; gas was cheap and families took to the open road, many for the very first time. The US interstate highway system was authorized in 1956 and construction began almost immediately in many states. Until then, families relied on connecting state road systems that took them on meandering journeys through big cities and small towns alike.
Beginning in the 1940s, roadside attractions started to spring up around the country in an effort to lure visitors to stop based on the exterior appearance alone. In the days before air conditioning and drive-through restaurants, the promise of free ice water and clean restrooms was a sufficient lure. However, in an effort to make themselves standout from the ever-crowded landscape, some roadside attractions began to feature exotic animals, games, quirky shopping or just really big things–such as the world’s largest advertising mascot signs.

Although modern construction has ensured that you are never far from fast food and gas, if you drive highway 40 today, it is easy to imagine how that drive must have felt back in the day. Today, driving along many of Indiana’s classic highways (Michigan Road, Brookville Road, Washington Street, Lincoln Highway) traces of old gift shops, restaurants, amusement parks and motels dot the landscape. Many of you can easily recall the giant TeePees that crowned the roof of the aptly named “TeePee” restaurants on the grounds of the state fairgrounds and on the cities southside. For me, I’ll always remember the giant coffee pot that formed the roof of the “Coffee Pot” restaurant in Pennville near Richmond on the National Road.

But, who remembers the “Mr. Bendo”, the muffler man? These giant statues routinely stood outside auto shops, usually with one arm outstretched while towering over the road with a muffler resting in his curved hand. Spotted in various incarnations all over the United States, these advertising icons were extraordinarily popular throughout the 1960s and 1970s. Legend claims that all of the original Muffler Men came from a single mold owned by Prewitt Fiberglass (later International Fiberglass). The first Muffler Man was allegedly a giant Paul Bunyan developed for a café on Route 66 in Arizona. Later incarnations were Native Americans, cowboys, spacemen and even the Uniroyal girl, who appeared in both a dress and a bikini. These behemoths either elicited fear or joy, but never failed to spur the imagination. Locally, you can find one of these “Mr. Bendo” statues at 1250 W. 16th St.
Today, you can get in the car and drive around Indianapolis in search of these classic old statues along with other oversized oddity signs. There are many websites and clubs devoted solely to cataloging and photographing these roadside oddities for posterity. Most of these Hoosier relics are outside of the city limits proper, but they can be found easily on a one-tank-trip. By the way, most importantly, bring your camera. Here is a partial list of these roadside oddities to give you a place to start.

Closeby, there is a giant Uncle Sam and his two smaller nephews on Shadeland Ave (between Washington St and 10th). There are two giant globes, one on Michigan Road on the way to Zionsville and the other near the pyramids visible from the interstate. There is a large dairy cow on South Shortridge Rd (between Washington St and Brookville Rd) sitting behind a 10-foot chain link fence topped with barbed wire and guard at the gate. There are two large swans in the middle of ponds, one on Mitthoffer (Between 21st St and 30th St) and the other on Pendleton Pike. Incidently there is a big fiberglass cow at 9623 Pendleton Pike near the afore mentioned swan. 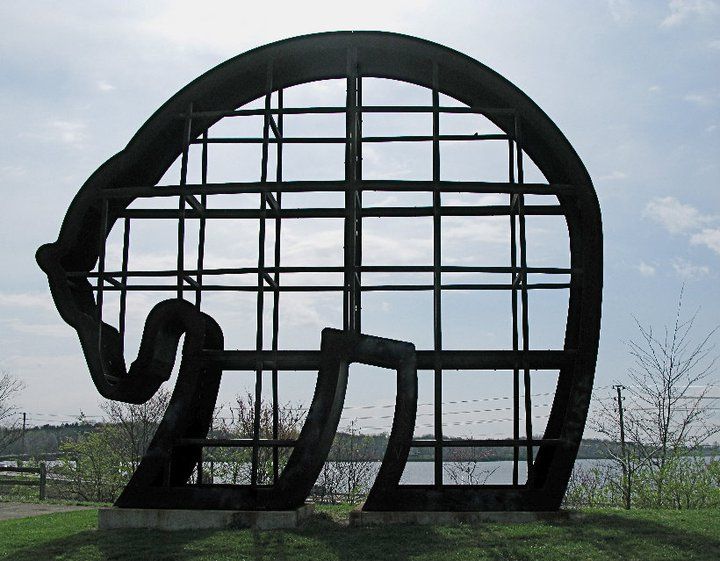 The old Galyan’s bear statue sits on the edge of the Eagle Creek Reservoir. When Dick’s Sporting Goods purchased Galyan’s, the company donated the statue to the City of Indianapolis. There are two huge bowling pins, one at Woodland bowl on the northside and the other at Expo bowl on the southside (visible from I-465). Don’t forget about the giant dinosaurs hatching from eggs at the Children’s Museum on the corner of 30th and N. Meridian Streets near downtown.
If you’re feeling adventurous, there is the world’s largest toilet in downtown Columbus, part of a giant house display. Once you make it up to the top floor of the “house”, you can jump in the toilet and slide down to the bottom. Near Centerville, there is a giant candle visible from I-70. In Fortville on the Mass Avenue extension (Highway 67) there is a giant pink elephant wearing eyeglasses and drinking a martini. In Franklin, a furniture store at 4108 S. US Hwy 31 has a towering chest of drawers and what they claim to be the world’s largest rocking chair.

If you’re traveling to Logansport, you can visit three giant statues in the same town; Mr. Happy Burger on the corner of US Hwy 24/W. Market St. and W. Broadway St. features a fiberglass black bull wearing a chef’s hat and a bib as does the Mr. Happy Burger located at 3131 E. Market St. along with a giant chicken statue at 7118 W. US Hwy 24 (on the north side) that you can see from the road. Muncie has two giants; A big fiberglass muffler man stands alongside the scissor-lifts & heavy equipment in the Mac Allister rental lot at 3500 N. Lee Pit Rd. and a Paul Bunyan statue is the mascot of a bar named Timbers at 2770 W. Kilgore Ave.

There is a car-sized basketball shoe at the Steve Alford All-American Inn on State Road 3 in New Castle and you can visit the towering, thickly-clothed “Icehouse man” painted in cool blue colors, the mascot of a bar named Icehouse at 1550 Walnut St. in New Castle. A balloon-shaped man with a chef’s hat, known by locals as “The Baker Man” is perched atop a pole with his arm raised in a friendly wave at 315 S. Railroad St. in Shirley, Indiana. And of course, who can forget the giant Santa Claus that greets visitors to Santa Claus, Indiana.

I’m sure I’m forgetting a few, perhaps many, but if this list helps stir up some old roadside memories among you, or better yet, gets you charged up to take an inexpensive holiday in search of roadside oddities, well, then it was a worthwhile read. 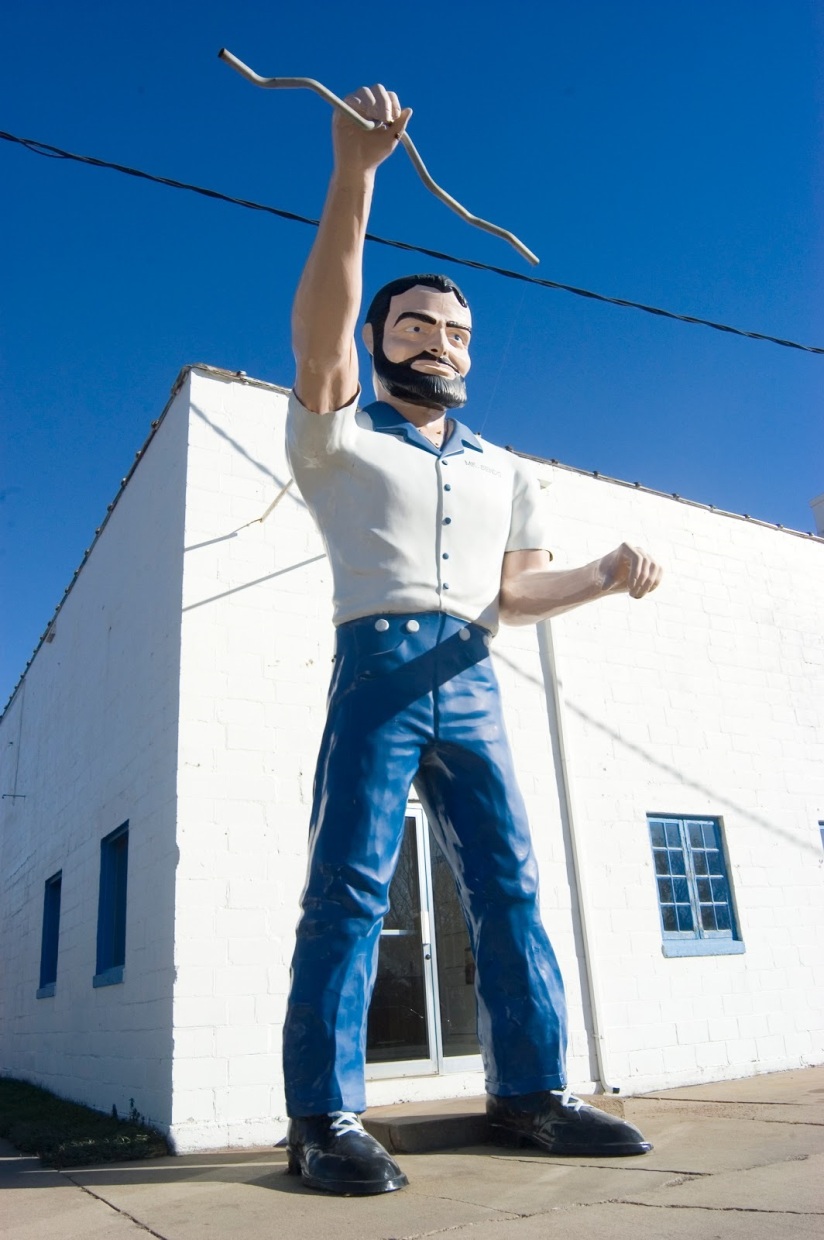