“Live fast, die young and leave a good looking corpse.” James Dean was the epitome of that 1949 quote penned by pioneering Chicago African American author Willard Motley. Dean died in a car crash nearly 65 years ago (September 30, 1955) but he remains a fixture on the pop culture landscape as the gold standard of cool. If you need proof of that assessment, go and visit his grave in Fairmount, Indiana. There you will see the lipstick spotted grave marker covered by more kisses than the yard of bricks at the Indianapolis Motor Speedway. 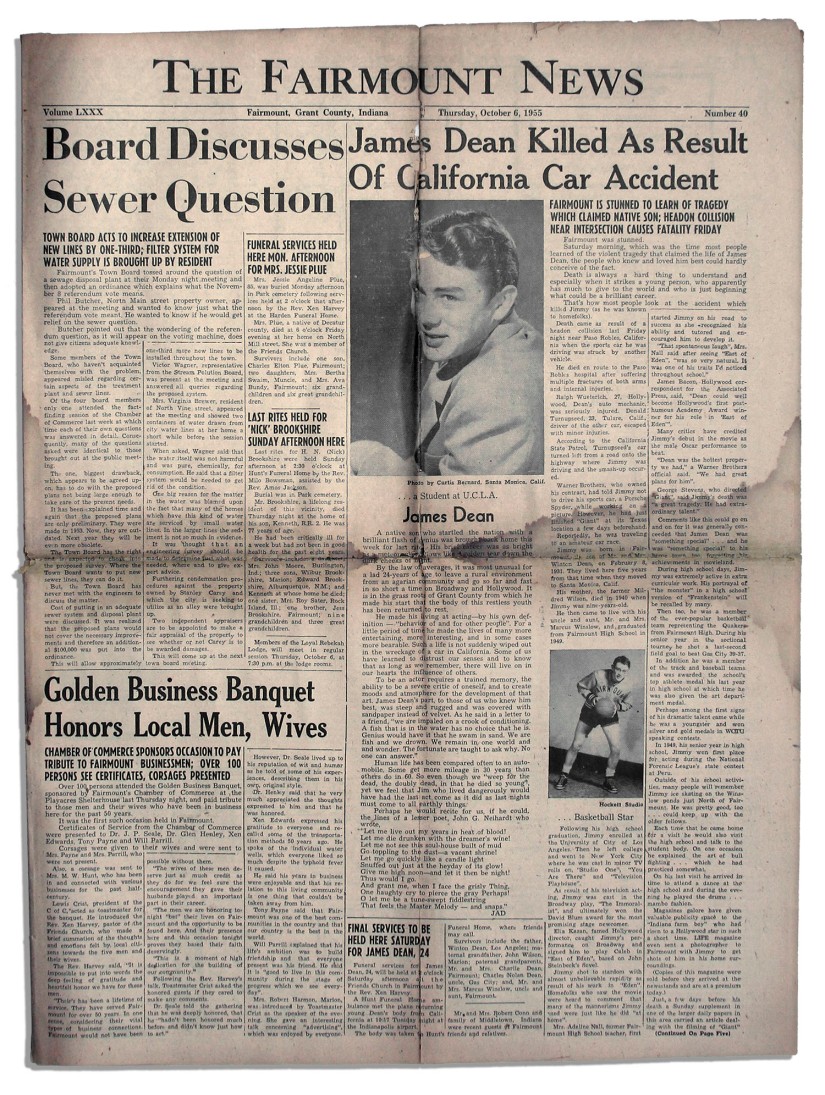 James Dean’s aluminium-bodied Porsche was launched into the air, torn and crushed. But that was not the end of the car’s story. The “curse” of James Dean’s car has become a part of America’s cultural mythology. Some claim that the source of that “curse” was none other than iconic Pop Culture car creator known as the “King of the Kustomizers”, George Barris. It was Barris who created the Batmobile, the Beverly Hillbillies truck, the Munster Koach and Grandpa Munster’s “Drag-U-La” casket car used in the 1960s TV series. It was Barris who painted the number 130 on the doors, front hood and rear trunk of Dean’s Posche Spyder. It was Barris who also stenciled the name “Little Bastard” on the back of the car. And it was Barris who eventually came to own the deathcar.
The wrecked Spyder was declared a total loss by the insurance company, which paid Dean’s father, Winton, the fair market value as a settlement. The insurance company, through a salvage yard in Burbank, sold the Spyder to a Dr. William F. Eschrich, a driver who had competed against Dean in his own sports car at three races in 1955. Dr. Eschrich installed Dean’s Porsche 4-cam engine in his Lotus IX race car chassis. Eschrich then raced the Porsche-powered Lotus, which he called a “Potus”, at seven California Sports Car Club events during 1956. At the Pomona Sports Car Races on October 21, 1956, Eschrich, driving this car, was involved in a minor scrape with another driver. In that same race, a Dr. McHenry was killed when his race car went out of control and struck a tree. Dr. Eschrich had loaned Dr. McHenry the transmission and several other parts from James Dean’s deathcar.

After Dr. Eschrich striped the car of it’s engine and any other salvageable racing components, he evidently sold the Spyder’s mangled chassis to Barris. It is not known exactly how Barris knew Eschrich, but in late-1956, Barris announced that he would rebuild the Porsche. However, as the wrecked chassis had no remaining integral strength, a rebuild proved to be a Herculean task, even for a wizard like Barris. Barris welded aluminum sheet metal over the caved-in left front fender and cockpit. He then beat on the aluminum panels with a 2×4 to try to mimic collision damage. So, likely to protect his investment and reputation, Barris promoted the “curse” by placing the wreck on public display.

First, Barris loaned the car out to the Los Angeles chapter of the National Safety Council for a local custom car show in 1956. The gruesome display was promoted as: “James Dean’s Last Sports Car”. From 1957 to 1959, the exhibit toured the country in various custom car shows, movie theatres, bowling alleys, and highway safety displays throughout California. It even made an appearance at Indianapolis Raceway Park during the NHRA Drag Racing Championship track’s grand opening in 1960. According to Barris, during those years 1956 to 1960, a mysterious series of accidents, not all of them car crashes, occurred involving the car resulting in serious injuries to spectators and even a truck driver’s death.
A few of those stories can be corroborated. A March 12, 1959 wire service story reported that the deathcar, temporarily stored in a garage at 3158 Hamilton Avenue in Fresno, caught fire “awaiting display as a safety exhibit in a coming sports and custom automobile show”. The Fresno Bee followed up with a newspaper story exactly two months later, stating that the “fire occurred on the night of March 11 and only slight damage occurred to the Spyder without any damage to other cars or property in the garage. No one was injured. The cause of the fire is unknown. It burned two tires and scorched the paint on the vehicle.” Barris claimed that the deathcar mysteriously disappeared in 1960 while returning from a traffic safety exhibit in Florida in a sealed railroad boxcar. When the train arrived in Los Angeles, Barris said he signed the manifest and verified that the seal was intact—but the boxcar was empty. Barris offered $1,000,000 to anyone who could produce the remains of the deathcar, but no one ever came forward to claim the prize.

Although the legendary car has disappeared, Historic Auto Attractions in Roscoe, Illinois, claims to have an original piece of Dean’s Spyder on display. It is a small chunk of aluminum, a few square inches in size, that was allegedly pried off and stolen from an area near the broken windscreen while the Spyder was being stored in the Cholame Garage after the crash. Also on display in the museum are an assortment of Abraham Lincoln relics (a lock of his hair, the handles from his coffin, various bloodstained cloth and one of the coins purportedly placed on the dead President’s eyes) as well as the Bonnie & Clyde, Flintstones, Back to the Future Movie cars and George Barris’ Batmobile. In 2005, for the 50th anniversary of Dean’s death, the Volo Auto Museum in Volo, Illinois, announced they were displaying what was purported to be the passenger door of the “Little Bastard”.
The 4-Cam Porsche engine (#90059), along with the original California Owner’s Registration (a.k.a. CA Pink Slip) listing the engine number, is still in the possession of the family of the late Dr. Eschrich. The Porsche’s transaxle assembly (#10046), is currently owned by Porsche collector and restorer Jack Styles in Massachusetts. But, to date, neither of Dean’s Porsches have been located. In his 1974 book “Cars of the Stars” George Barris first wrote about the curse and the numerous incidents involving fatal accidents and other serious injuries, but other than the few minor mishaps reported here, researchers have found no evidence to support most of Barris’ claims. Regardless, the story of the curse has certainly failed to diminish the James Dean legend. 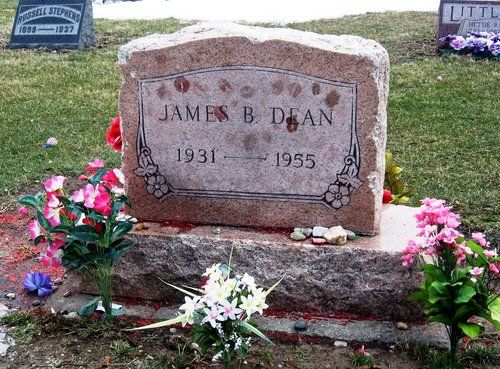 Like many a Hoosier youth, I too had my “James Dean phase”. Some twenty years ago, my wife Rhonda and I took a trip up to Fairmount to visit James Dean country. We were toured around the community by a couple of older gentlemen who graciously pointed out spots the young actor frequented including the family farm, Dean’s old high school, a few of the old stores Dean used to frequent, the cemetery and the funeral home where Dean was prepared for burial. One of the men mentioned, “He had a closed-casket funeral to conceal his severe injuries from his hometown friends and family.” These men had been underclassmen at Fairmount high school and relayed stories of encounters with Dean from their school days. They remarked that when the young method actor returned to Fairmount after making a Pepsi commercial and a bit part on TV, Dean attended a high school dance. “We didn’t like him because he had all of the girls in the room fawning all over him and we couldn’t get a dance.” they said. “We didn’t see him as a big shot from Hollywood, we saw him as a guy trying to steal our dates.”

During our 10th wedding anniversary trip to California in 1999, Rhonda and I drove from San Francisco to Hollywood. Part of the way on scenic Highway 101 (which I highly recommend should you ever find yourself out that way) and part of the way retracing James Dean’s final drive. The best way you could envision the scene while sitting here in Indiana in the dead of winter would be for you to make a peace sign with the index and middle fingers of your right hand. Hold your arm straight out. The crash happened where your fingers meet, with the Porsche coming toward you on your middle finger and the Ford traveling up your forearm toward your index finger in the opposite direction. Imagine Turnupseed’s car bearing left and swerving onto your index finger precisely at the same time as Dean’s car passes the same spot. Got it?

Driving along that long two-lane stretch of Central California highway, it’s easy to imagine what James Dean’s last hour was like even though much of today’s road isn’t the same one James Dean traveled on. The route was upgraded and moved slightly north in the 1960s. However, parts of the original can still be found. As you drive west on the last mile to the crash site and look off to your left and you can still see what’s left of the original two-lane road. If you pull off to the side of the road, it’s still possible to walk on part of the crumbling pavement, with weeds sprouting in the middle, and imagine that little silver Porsche speeding past.

From this vantage point, it’s also easy to understand how Donald Turnupseed didn’t see the tiny silver sports car as it approached from the foot of the Polonio Pass. The road shimmers along this route, making it hard to tell where the road ends and the horizon begins. Cars appear and disappear in vaporous waves of prismic light like an optical illusion as light reflects off the road surface. Today, the intersection has been widened and there’s a left-turn lane to access Highway 41 requiring a stop and a 90-degree turn. A road sign rises from the median between the converging lanes ominously proclaiming it as “James Dean Memorial Junction”. The two lanes have remained virtually unchanged since then, while the population of the southern San Joaquin Valley has grown 120% since the crash. Headlight use is mandatory along the 58-mile route, from Lost Hills off Interstate 5 to past Paso Robles to the west. Today, the spot where James Dean died is known as “Blood Alley” due to the number of fatal crashes, mainly head-on collisions, that still occur there among the high volume of commuters, truck drivers, and tourists today. Highway officials report that 42 deaths occurred on the road during the 45 years after James Dean’s passing. Another 38 were killed from 2000 to 2010.

Parking and walking over to the spot where James Dean died is a dangerous exercise on this remote, but very busy highway. Cars and trucks speed by in both directions and anything short of a cautious drive by is not recommended. Where Highway 41 merges into Highway 46, on a barbed-wire fence off the westbound lane, is a small memorial signifying the spot where Dean’s Porsche skidded to a stop. There is a small barren patch dotted with tufts of grass. It can easily be missed unless you know it’s there. It sort of blends in to the surrounding nothingness except for the shadows of footprints and mementos left by fans from all over the world. In September 2015, The Hollywood Reporter noted that visitors to the crash site leave an assortment of tributes, including pictures, alcohol and women’s underwear. However, contrary to popular belief, this is not the actual intersection where the accident occurred. The accident scene is approximately 100 feet to the south of the current intersection, where the road used to be. Seems that retrospectively, Dean’s death, like his life, can easily get lost in the legend. One thing is certain though, the crash that killed the rising Hoosier movie star succeeded in cementing his status as a legend. 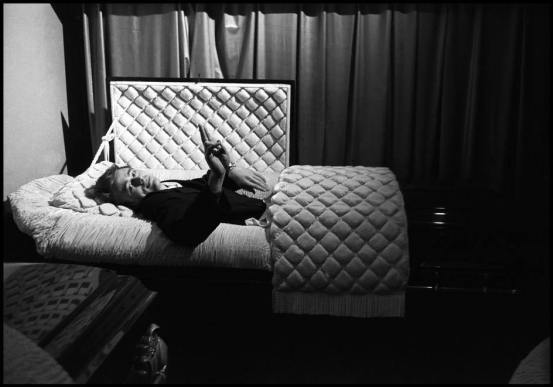 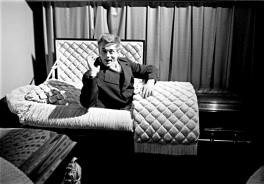 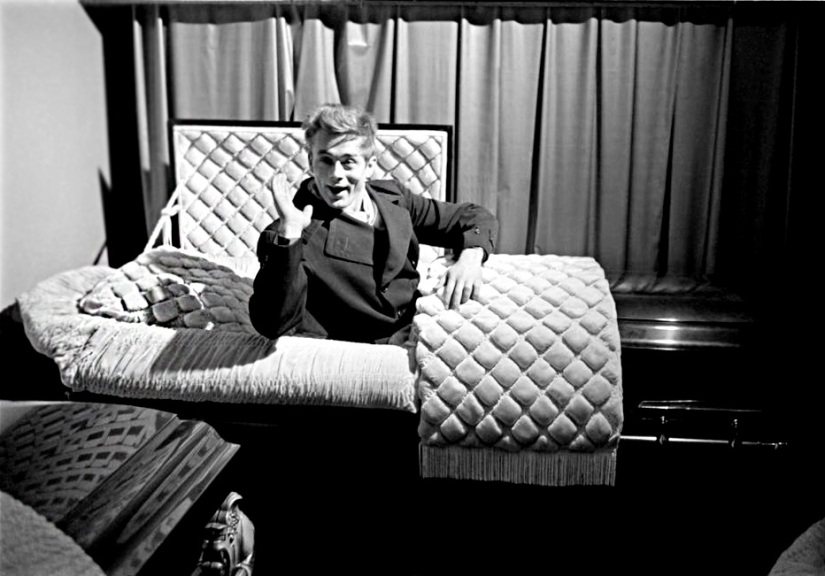