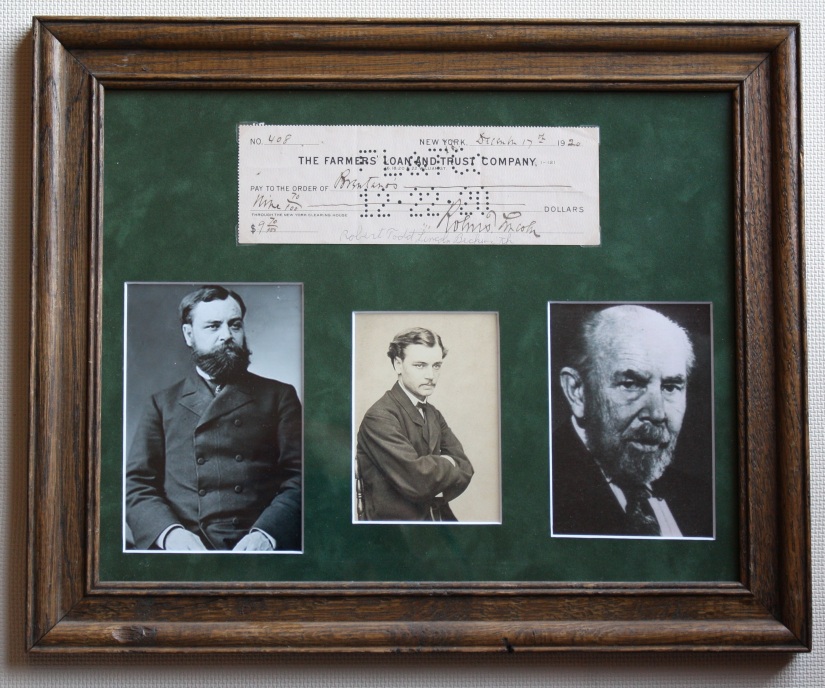 Anyone who reads my column regularly knows that I have a love of odd, unusual history relics, ghost stories and collectibles. I spend a lot of time at antique shows, flea markets, libraries and historic buildings and about once a year, I stumble across something that speaks to me and ultimately reveals a deeper story than I ever imagined. I recently acquired an item, and a story, that I’d like to share with you. It is a personal check dated December 17, 1920 from the New York City bank account of Robert Todd Lincoln, the only surviving child of our 16th President, Abraham Lincoln.
Finding a cancelled check from a long forgotten bank account of a dead celebrity is not as rare as it sounds. There exists a thriving underground market of dealers in checks and official documents from famous, or infamous, personalities from every field you can imagine. Think of it, most people save their old checks and if you’re a collector, what better way to authenticate a signature than on a check?
As with most Hoosiers, I share a certain fascination with Abraham Lincoln and the many sites, stories and memorabilia associated with him. I have long tried to decipher the complicated relationship between Robert Todd Lincoln and his parents. Aside from being Mr. and Mrs. Lincoln’s oldest son, Robert Todd Lincoln (August 1, 1843 – July 26, 1926) was an accomplished lawyer, US Ambassador and Secretary of War for Presidents Garfield and Arthur. In fact, most historians consider Lincoln to be our country’s second most effective Secretary of War behind only Jefferson Davis. Yes the same Jefferson Davis who opposed his father during the American Civil War as President of the Confederacy.
Robert Lincoln studied at Harvard University from 1861 to 1864 and much to the embarrassment of his father, Mary Lincoln prevented her son from joining the Union Army until shortly before the war’s conclusion in 1865. He briefly held the rank of captain, serving in the last weeks as part of General Ulysses S. Grant’s immediate staff and never saw actual combat. He was in the room at Appomattox when Lee surrendered.
Lincoln’s distant relationship with his father was due in part to the fact that Abraham Lincoln spent months on the judicial circuit during Robert’s formative years growing up in Springfield and later Robert was away at college when his father attained the White House. Although Abe was proud of Robert and thought him bright, the two lacked the same strong bond Father Abraham had with Bob’s younger brothers, Willie and Tad. There can be no doubt that Robert deeply admired his father and he wept openly at his deathbed.

Following his father’s assassination, in April 1865, Robert moved with his mother and brother Tad to Chicago, where Robert completed his law studies at the University of Chicago. Robert was admitted to the bar on February 25, 1867. In 1868, Robert Lincoln married Mary Eunice Harlan, the daughter of Iowa Senator James Harlan, a close friend of Abraham Lincoln. Senator Harlan is perhaps remembered for an 1865 incident as Secretary of the Interior under President Andrew Johnson, when he found a copy of Leaves of Grass on Clerk Walt Whitman’s desk (left there as the poet was making revisions) and found it to be morally offensive. “I will not have the author of that book in this Department”, he said. “If the President of the United States should order his reinstatement, I would resign sooner than I would put him back.” Robert and Mary had two daughters and one son: Mary “Mamie” Lincoln, Abraham Lincoln II (nicknamed “Jack”) and Jessie Harlan Lincoln.
After his father’s assassination, Robert’s life continued to be connected to sadness and tragedy. After all, Robert was invited to accompany his parents to the Ford’s Theatre but declined (citing what we would today call “Jet Lag” from his trip home from the war front) and instead he went to bed early at the White House. He was informed of the shooting just before midnight and was at his father’s bedside when he died. No doubt, the decision not to accompany his parents haunted him for the rest of his life. Not only for the supposed inability to protect his father, but also for the prospect that he too might have died in the attack.

In 1875, perhaps rashly and ill-advised, Robert had his mother Mary committed to a psychiatric hospital in Batavia, Illinois. Mary’s eccentric behavior has been well documented. Nevertheless, Robert tasted the sting of public criticism and rebuke for the first time in his young life. The incident led to a profound estrangement between Bob and his mother and the two never fully reconciled.
Coincidentally Robert was was just a few feet away when President James Garfield was shot by Charles Guiteau at the Sixth Street Train Station in Washington, D.C. on July 2, 1881. Lincoln was serving as Garfield’s Secretary of War at the time and cradled the President’s body on the railroad platform as medical personnel arrived on scene. Later, on September 6, 1901, at President William McKinley’s invitation, Lincoln was at the Pan-American Exposition in Buffalo, New York, where the President was shot by Leon Czolgosz. From then on, Lincoln would politely refuse all Presidential invitations with the comment “No, I’m not going, and they’d better not ask me, because there is a certain fatality about presidential functions when I am present.” However, he did attend the dedication of the Lincoln Memorial in 1922 in the presence of President Warren G. Harding. Harding was dead within a year.
Lincoln’s son Abraham Lincoln II , aka “Jack”, died in London at the age of 16 from blood poisoning after a freak infection set in following surgery to lance a boil under his arm. Jack was originally buried in the Lincoln Tomb in Springfield, Ill. but his mother (coincidentally named Mary) had Jack’s remains dug up and re-interred at Arlington National Cemetery after her husband Robert died in 1926. The cycle of sadness followed Robert after his death as Jack’s body was removed from the President’s tomb, where it had rested near his illustrious grandfather for 40 years, and removed to Arlington. Robert himself had expressed his intentions to be buried next to his father and son in Springfield, but for unknown reasons, his wife changed the plans. The empty crypts of both men can be found in the President’s tomb in Springfield to this very day. As a final irony, Jack’s name was not added to his father’s Arlington memorial until 1976.

Of Robert’s remaining children, Jessie Harlan Lincoln Beckwith (1875–1948) had two children, Mary (“Peggy”) Lincoln Beckwith [1898 – 1975] and Robert (“Bud”) Todd Lincoln Beckwith (1904–1985). Robert’s other daughter, Mary (“Mamie”)Todd Lincoln (1869–1938) had one son, Lincoln Isham (1892–1971). Isham married but never had children. Peggy, who was rumored to be a lesbian because she smoked cigars and wore men’s pants, also never married or had children. Her brother Bud married three times but had no heirs.
That is where my personal story begins. As it happens, the 1920 Robert Todd Lincoln check that I purchased was also signed by Bud. This intrigued me as I knew little or nothing of Bud Beckwith and wondered why the check would be signed by both men.
Bud was an attorney and self described “playboy” who often listed his profession as “gentleman farmer of independent means” rather than lawyer. He served in the Coast Guard during World War II, which resulted in a lasting hobby of boating and sailing. To say that “Bud” Beckwith was eccentric is like saying water is wet.
At some point, Bud Beckwith realized that he was the last heir to the Lincoln name, the last direct link to the martyred President. In this role, he realized he was now the repository of the everyday Lincoln papers and mundane family belongings perhaps unworthy of museum stewardship but valuable just the same. Among those were the cancelled checks of his grandfather. Bud decided to forever link his name with that of his illustrious namesake by counter signing some of the checks that were left to him with his full name, “Robert Todd Lincoln Beckwith” beside the fountain pen signature of “Robert Todd Lincoln”. He would sometimes send these checks out to autograph collectors who wrote asking for signed mementos from Bud or his family.

My check was written by the son of President Abraham Lincoln on December 17, 1920. It was made out to “Brentano’s” bookstore in New York City for nine dollars and seventy cents. It is easy to imagine Secretary Lincoln walking into Brentano’s on that Friday evening one week before Christmas before heading back to his estate, “Hildene”, in Manchester Center, Vermont. Was he buying books to give away as Christmas presents or to read on the 4 hour train ride home to Hildene? Perhaps he was buying books about his father?

And Brentano’s? Well, if you are a fan of the “Seinfeld” TV show, you know Brentano’s. It was the setting for the 1998 episode titled, “The Bookstore” in which George is accused of taking an expensive art book into the bathroom causing the book to become forever “flagged” as unreturnable. Jerry also catches his Uncle Leo shoplifting in the store. As you can imagine, pop culture fanatic that I am, I was thrilled to establish my own personal link between Abe Lincoln and the iconic computer age television sitcom.

The last living person with a direct link to President Abraham Lincoln, Robert’s namesake grandson Robert Todd Lincoln Beckwith, aka “Bud”, died alone in a nursing home in Saluda, Virginia (about 45 miles from the Confederate Capitol of Richmond) at the age of 81 on December 24, 1985 at around 6:05 pm. Nearly 65 years to the day after my check was signed. History lives my friends. You can touch it, dream about it and in many cases buy it and make it your own. My suggestion? Go and visit your local antique store, there are many fine shops and malls around Irvington, the Indianapolis eastside and all the way out to Greenfield and beyond on the Historic National Road. You just never know what you might find. History awaits you.