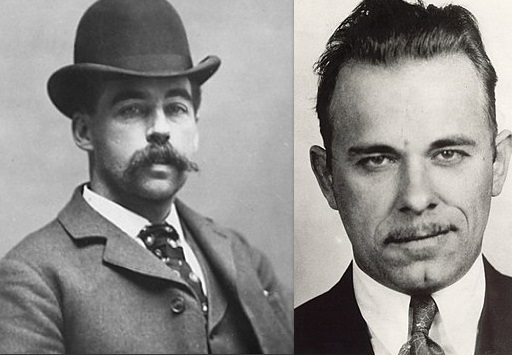 This article originally ran in the January 19, 2009 edition of the Eastside Voice. I spent this past weekend with the Great-great-grandson of H.H. Holmes, “Bloodstains” author Jeff Mudgett, and the film crew from Travel Channel’s “Ghost Adventures” series. We gathered to tape a show inside the home where Holmes committed one of his most heinous crimes: the murder of 10-year-old Howard Pitezel. For that reason, I thought this might be a perfect time to revisit one of the few positive aspects of that crime and highlight Irvington’s role in the saga of Federal law enforcement in this country. While the society has faded away, the meeting place has closed its doors and the article’s agent provocateur has become a fellow columnist, the subject matter retains its relevance a decade later.

During the inaugural meeting of the “Ichabod Crane Society of things that go bump in the night” at Book Mamas in Irvington held Saturday January 17 2009, I learned something interesting I’d like to share with you. One of the guests, Irvingtonian Steve Nicewanger asked me if I was aware that Irvington had a connection to the formation of the Federal Bureau of Investigation. Steve informed me that the F.B.I. had been formed to track down one of Irvington’s most infamous figures, America’s first serial killer Dr. H.H. Holmes. Holmes was alleged to have killed over 200 people in Chicago in 1893. His story is well documented and his spirit is rumored to still haunt the Irvington bungalow where he murdered and desecrated the body of a 10 year old boy named Howard Pitezel. Holmes came through Irvington in the autumn of 1894 while being chased by a dogged Pinkerton Detective named Frank Geyer. I thought I had researched the Holmes saga pretty thoroughly, but I must admit that I had never heard of this possible connection. I was intrigued by the thought of it. 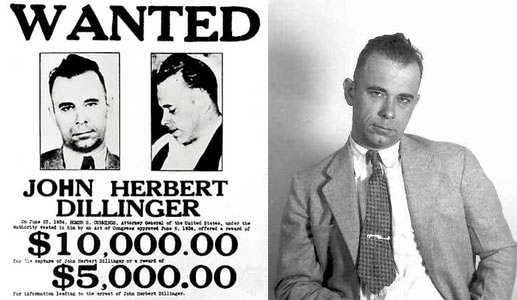 I have always attributed the genesis of the F.B.I. to another infamous Hoosier with Irvington ties, John Dillinger, who robbed an Irvington drug store and soda fountain in the summer of 1933. The building still stands and is home today to DuFours restaurant on the northwest corner of Washington and Audubon (now the Lincoln Square Pancake House). At the time, Dillinger allegedly lived on a property known as “Rickett’s Farm” near the Kile Oak in Irvington. I knew that J. Edgar Hoover, the man most people credit with forming the present day F.B.I., was a little known Washington D.C. bureaucrat until Dillinger came along. Hoover made his reputation by expanding the law enforcement powers of his obscure bureau to track down Dillinger. Dillinger became the bureau’s first “Public Enemy # 1” on June 22,1934, which ironically was John’s 31st birthday. Hoover’s G-men would kill Dillinger barely a month later outside of Chicago’s Biograph Theatre on July 23, 1934. Hoover would display Dillinger’s death mask on the wall outside of his office for the next 40 years.
Intrigued by Mr. Nicewanger’s statement, I immediately began research to see if indeed this connection could be made. Sure enough, it’s true…at least in theory. Quoting the Bureau’s official website; “The FBI originated from a force of Special Agents created in 1908 by Attorney General Charles Bonaparte during the Presidency of Theodore Roosevelt. The two men first met when they both spoke at a meeting of the Baltimore Civil Service Reform Association. Roosevelt, then Civil Service Commissioner, boasted of his reforms in federal law enforcement. It was 1892, a time when law enforcement was often political rather than professional…Roosevelt and Bonaparte both were “Progressives.” They shared the conviction that efficiency and expertise, not political connections, should determine who could best serve in government.”

A young Teddy Roosevelt campaigned in the Midwest for Benjamin Harrison in the 1888 presidential election, including many stump speeches here in the Hoosier state. As a reward, President Harrison appointed Roosevelt to the United States Civil Service Commission, where he served until 1895. It was during this time that H.H.Holmes was fast becoming America’s version of “Jack the Ripper”. As he fled Chicago in 1894, Holmes used the inability of local law enforcement agencies to communicate with each other to evade prosecution. During this period, the Bureau was a branch of the “Secret Service” staffed by former “Pinkertons” from the legendary detective agency founded by Allen Pinkerton. Upon Pinkerton’s death in 1884, the Pinkertons were mostly known as thugs whose job it was to break up early labor union rallies and for their role in the hounding of Butch Cassidy’s Wild Bunch. Holmes would be captured and hung in Philadelphia on May 7, 1896. The ability of Holmes to evade capture while his heinous crimes were reported on the front pages of newspapers across America would lead to the conversation of a unified national law enforcement reporting and evidence gathering agency by Roosevelt and others.

Harrison’s career ended with his defeat to Grover Cleveland in 1892. Ironically, one of the first things he did after leaving office was to visit the World’s Columbian Exposition in Chicago in June 1893, an event closely associated with H.H. Holmes. As Harrison’s career waned, Roosevelt’s career was catching fire. From his post on the US Civil Service Commission, Teddy became President of the New York City Board of Police Commissioners, then Assistant Secretary of the Navy, Governor of New York and Vice-President of the United States. Theodore Roosevelt became President of the United States in 1901, five years later, Teddy dedicated Fort Benjamin Harrison in the former president’s honor in 1906.
Shortly before Fort Ben’s dedication, Roosevelt appointed Bonaparte Attorney General.

In 1908, Bonaparte applied their shared philosophy from 1892 to form the Department of Justice by creating a corps of Special Agents. It had neither a name nor an officially designated leader other than the Attorney General. Yet, these former detectives and Secret Service men were the forerunners of the FBI. In the forty years between Holmes in 1893 and Dillinger in 1933, the bureau would slowly expand it’s law enforcement responsibilities. If the 1893 Bureau had encountered the evil Dr. Holmes, the best they could do would have been to gather information to assist in his arrest. In 1933, the Bureau’s powers had been expanded to the point of using deadly force upon first contact with John Dillinger.

So an insightful comment by Irvingtonian Steve Nicewanger provoked research that would once again perfectly illustrate the uniqueness of the Eastside Indianapolis community known as Irvington. Reminding us that three separate personalities with fleeting ties to the Irvington community; a serial killer, a bank robber and a U.S. President would contribute to the founding of the most powerful law enforcement agency the world has ever known. Today’s F.B.I.