As discussed in part I of this series, Henry Ford had early connections to auto racing’s two biggest cities: Indianapolis and Daytona. And despite his straight-laced appearance, boy scout demeanor and pious reputation, he also had connections to some of the biggest names in the history of crime. Those connections were not personal, they came from his innate ability to create quality automobiles.

Star-crossed lovers Clyde Barrow and Bonnie Parker are infamous for their two-year crime spree from 1932 until their deaths in a hail of bullets in 1934. At the time of their death, they were believed to have committed 13 murders and dozens of robberies and burglaries across the Central United States with their gang during the Great Depression. One reason for their “success” was due to the driving skill of Clyde Barrow. And for Clyde, there was no better car on the road than the Ford V8. The Ford V8-powered automobile was introduced in 1932 by the Ford Motor Company. From the start, the V8 proved tremendously popular with motorists. 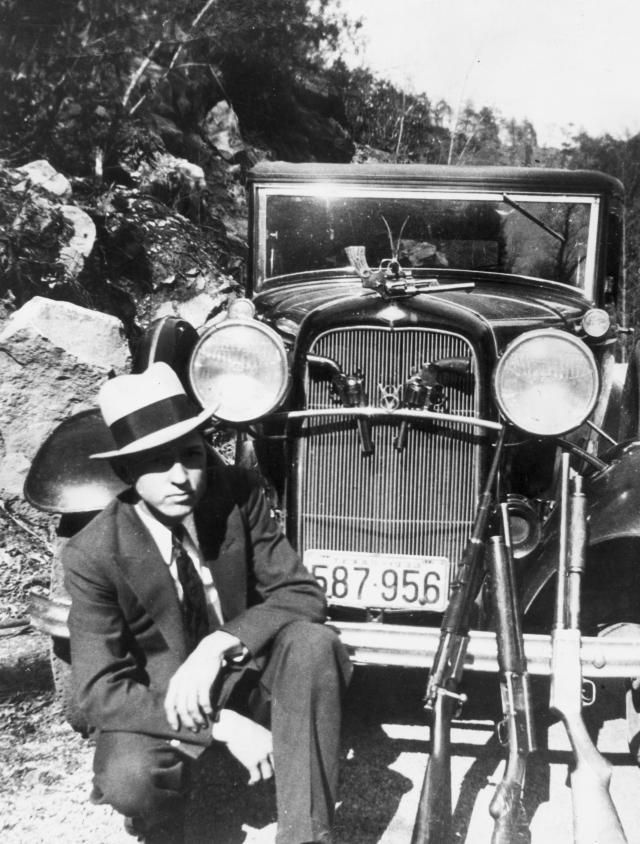 Clyde had an uncanny ability to steal Ford V8 cars and evade the police whenever he was trapped, cornered or surrounded. Clyde claimed that a Ford V8 car could outmaneuver and outrun any police car that attempted to follow him. Additionally, living a life on the run meant that Clyde and Bonnie spent days (or weeks) traveling long distances and sleeping in their car at night. Clyde supposedly preferred Ford V8s because he thought that their bodies were thicker and, thereby, more bullet-resistant. And those famous photos of Bonnie and Clyde mugging, clowning and romancing for the camera, most of them include a Ford V8 in the background. 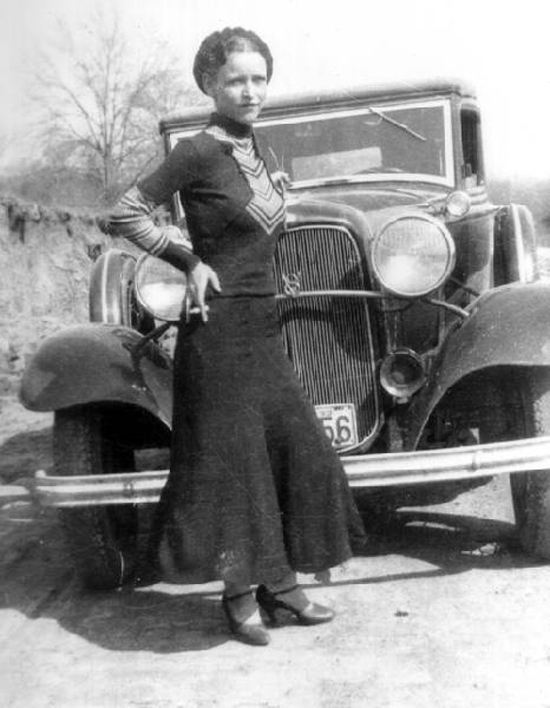 Clyde Barrow loved the Ford V8 so much that he wrote a letter to Henry Ford in April of 1934 praising the car. Addressed simply to “Mr. Henry Ford Detroit, Mich.” from “Tulsa, Okla. 10th April” the letter, misspellings and all, reads: “Dear Sir:- While I still have got breath in my lungs I will tell you what a dandy car you make. I have drove Fords exclusively when I could get away with one. For sustained speed and freedom from trouble the Ford has got ever other car skinned and even if my business hasen’t been strickly legal it don’t hurt enything to tell you what a fine car you got in the V8- Yours truly, Clyde Champion Barrow” (Clyde Barrow’s middle name was actually Chestnut. He jokingly listed “Champion” as his middle name when he entered the Texas state prison at Huntsville in 1930.) 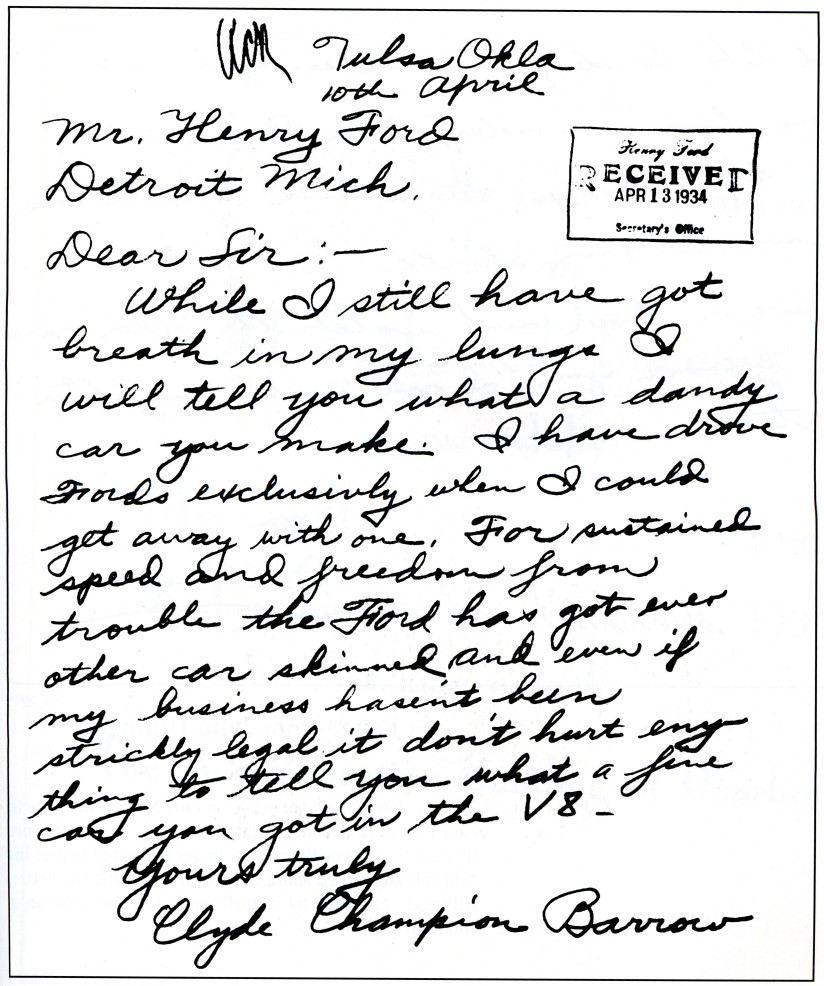 Amazingly, after Ford’s secretary failed to recognize the outlaw’s name,a reply was sent on April 18th. The neatly typed letter on the ornate letterhead of the Ford Motor Company reads: “Mr. Clyde Barrow, Tulsa, Oklahoma. Dear Sir: On behalf of Mr. Ford, we wish to acknowledge your letter of April 10 and thank you for your comments regarding the Ford car. H.R. Waddell, Secretary’s Office.” Six weeks later, Bonnie and Clyde were dead. A debate rages to this day as to whether the letter is authentic or not. Regardless, it is a priceless piece of Americana that can often be found on public display at the Henry Ford museum in Dearborn. When Dillinger was asked about Bonnie & Clyde after his capture and incarceration at Crown Point, he responded, “Bonnie & Clyde? Huh, a couple a punks.” 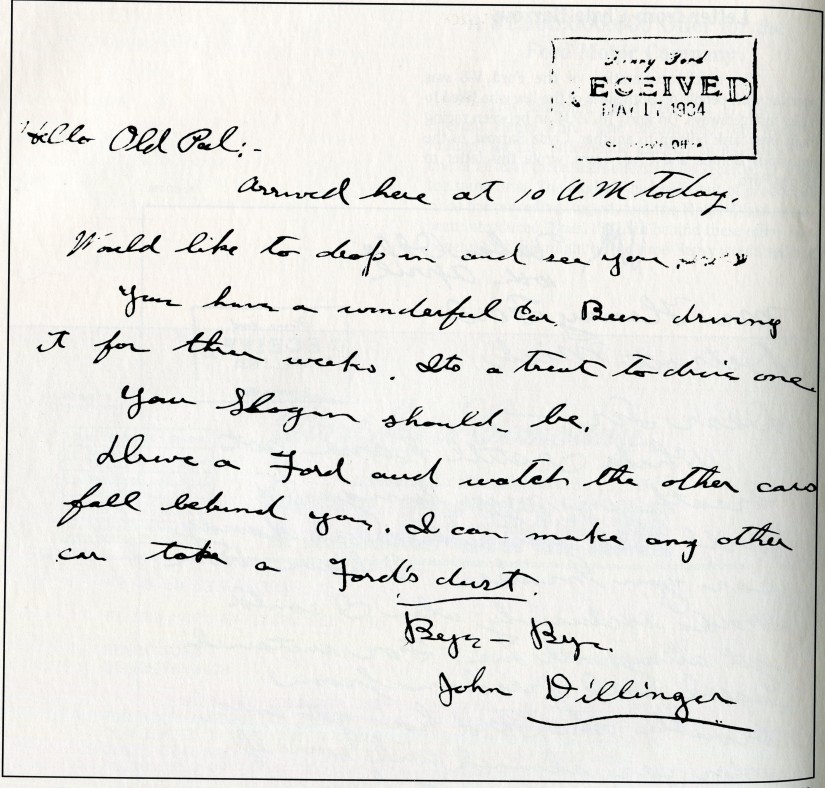 Ironically, a month later, Henry Ford would receive another letter. In May of 1934, a letter arrived from the most famous gangster in the world: John Dillinger. Like the previous letter, this one features the official stamp of the Henry Ford office, dated May 17, 1934. The letter is postmarked from Detroit and, like the Bonnie & Clyde letter, is entirely handwritten. It reads: “Hello Old Pal. Arrived here at 10:00 AM today. Would like to drop in and see you. You have a wonderful car. Been driving it for three weeks. It’s a treat to drive one. Your slogan should be, Drive a Ford and watch the other cars fall behind you. I can make any other car take a Ford’s dust! Bye-Bye, John Dillinger”. The Dillinger gang had just held up the Citizens Commercial Savings Bank in Flint, Michigan, on May 18, 1934. Like the Barrow letter, the authenticity of the letter writer is called into question. A week after this letter was received, Bonnie and Clyde were dead. 67 days later, so was John Dillinger. While Dillinger died in a Chicago Alley next to the Biograph Theater, Clyde Barrow died behind the wheel of his last stolen car: a Ford V8.
Regardless, at least one Ford dealer recognized an opportunity when he saw it.

The letter, coming on the heels of the disastrous escape by Dillinger and his gang from the Little Bohemia Lodge in Manitowish Waters, Wisconsin a month before on April 22, inspired a Milwaukee Ford Motor Car dealership to create and distribute a sales brochure asking the question, “Will They Catch John Dillinger?” on the front. When opened, it featured the answer, “Not Until They Get Him Out of a Ford V-8!” with additional info at bottom reading, “NEWS NOTE: John Dillinger evaded capture by making speedy get-away in new Ford V-8 after famous jail break at Crown Point, Indiana. His spectacular get-away from Little Bohemia Resort, Mercer, Wisconsin, was also in a Ford V-8.” The back of the brochure touts the Ford V-8’s “Speed: The Ford V-8 can do better than 80 miles per hour and keep it up, hour after hour. It has vibrationless pickup, tremendous hill climbing ability, and holds the road perfectly.” The “Economy: The new dual down-draft carburetion system of the Ford V-8 provides increased fuel economy at all speeds. The Ford V-8 gives better gasoline mileage than any other six or eight of equal power.” And, perhaps confirming Clyde Barrows assertion, the “Safety: The Ford all-steel body is inherently strong and exceedingly durable. It is electrically welded into a one-piece construction, giving greater safety and quietness.” The brochure concludes with the dealership name and address at 407 E. Michigan Street in Milwaukee, Wisconsin.

Furthermore, in October of 1934, when Charles Arthur “Pretty Boy” Floyd was gunned down by G-men in a farm field in East Liverpool, Ohio, it was a Ford V8 that brought him there. And during the 1940s, what was the moonshine distillers’ favorite rum runner car? A 1940 Ford with a flathead V-8 that could be souped up, or replaced with a newer, more powerful engine-maybe from a Caddy ambulance. The 1940 Ford Coupe had a huge trunk for hauling shine. NASCAR great Junior Johnson (who was still running bootleg moonshine when he was winning races in the 1950s) once said the fastest car he ever ran was a flathead Ford. Mafia Dons Carlos Gambino and Paul Castellano along with mob hitman Richard “The Iceman” Kuklinski all drove Ford Lincoln Continentals. Thus, it was no coincidence that “The Godfather” film featured a 1941 Lincoln Continental. And you pop culture crime buffs will easily recall that when O.J. Simpson made his “escape”, he did it in a white Ford Bronco. So, let me ask you, have you driven a Ford lately?