This past weekend the Irving Theatre played host to a book signing. Bob Netolicky, Robin Miller and Richard P. Tinkham visited the Irv for the official release party of their new book “We changed the game.” The book tells the story of the Indiana Pacers and the ABA from the very beginning by the men who lived it. Netolicky and Miller shared funny stories about the league that kept the crowd of 150 guests in stitches for the duration. However, even though he spoke in measured tones, sometimes barely above a whisper, it was Mr. Tinkham who kept the crowd on the edge of their seats. 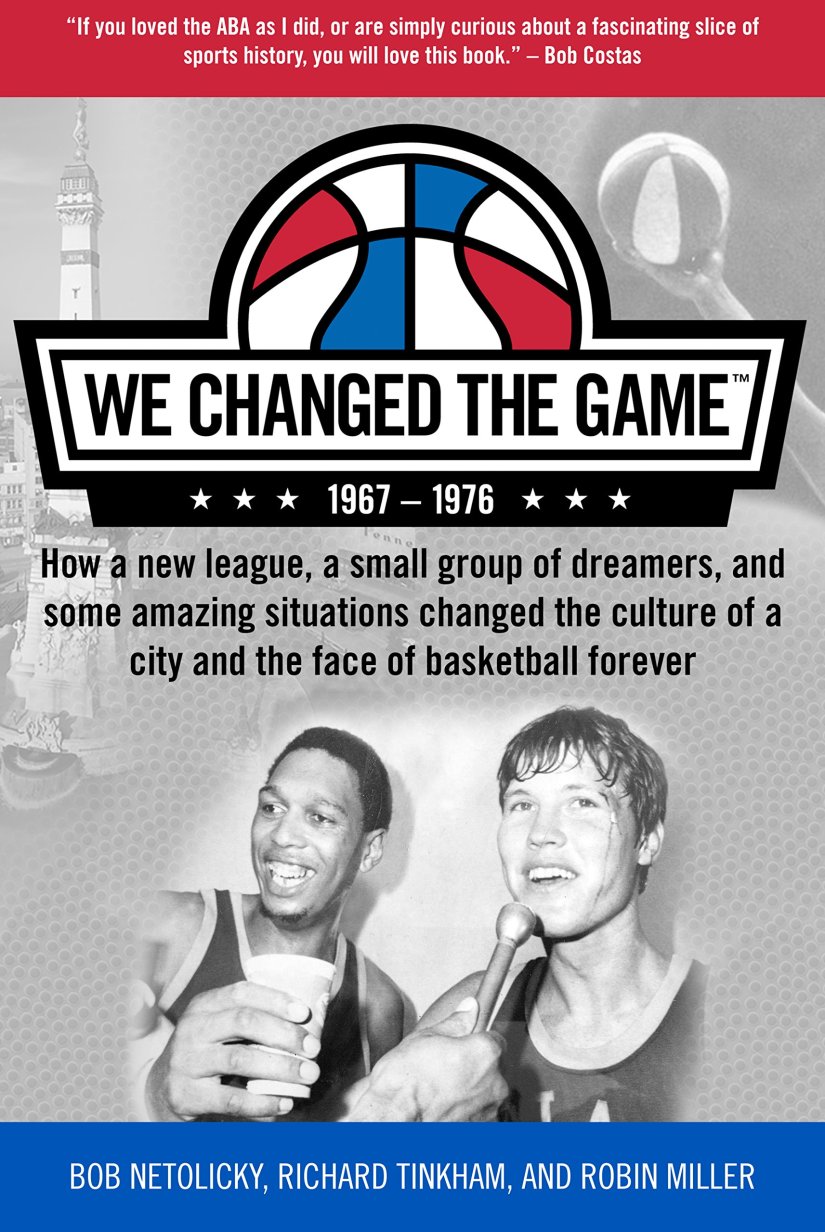 Dick Tinkham is the Rosetta Stone of the American Basketball Association. He was there during the embryonic stages of the league forward. Dick explained how the ABA was originally designed to be a six-foot or under player league…gasp! He revealed how the Pacers team almost folded at the close of the 1968-69 season…gulp! And he continued with tales of crucial deals made in airports, hotel rooms, restaurants and bars…wheeze! Yes, Dick Tinkham knows where all the bodies are buried.
Mr. Tinkham talked about early attempts by the ABA to lure Indianapolis native and hall of famer Oscar Robertson away from the NBA Cincinnati Royals. In 1967, Tinkham had hopes that Robertson might jump to the upstart Pacers. Robin Miller pointed out that Oscar had a $100,00 guaranteed contract and that “the Big O wasn’t going anywhere”. Mr. Tinkham then disclosed that it was Robertson who advocated that the Pacers travel to Dayton Ohio and check out a young man named Roger Brown. That signing changed the face of this city and arguably, saved the ABA. Ironically a few shot years later, Oscar Robertson would pop up again, this time as the foil for the ABA.
In June of 1971, only three years after the ABA began play, NBA owners voted 13–4 to work toward joining both leagues. A merger between the NBA and ABA appeared imminent and Dick Tinkham was right in the middle of it. After the 1970–71 season, Basketball Weekly reported: “The American basketball public is clamoring for a merger. So are the NBA and ABA owners, the two commissioners and every college coach. The war is over. The Armistice will be signed soon.” During this short-lived courtship, the two leagues agreed to play pre-season interleague exhibition games for the first time ever.
At last Saturday’s event in the Irving theatre, Dick Tinkham detailed how he met privately with Seattle SuperSonics owner Sam Schulman, a member of the ABA–NBA merger committee in 1971 to work out details for the merger. Schulman asked Tinkham how much it was going to take to get each ABA team (there were 11 at the time) to move into the NBA. Tinkham revealed to the gathered crowd that this was a question he had not anticipated and was totally unprepared to answer. Dick, thinking fast on his feet, replied that it would take $ 1 million for each team. Schulman agreed and phoned NBA Commissioner J. Walter Kennedy to announce that an agreement had been reached for a merger.

Schulman told the commissioner that he was so adamant about the merger that if the NBA did not accept the agreement, he would move the SuperSonics from the NBA to the ABA. Not only that, but Schulman threatened to move his soon-to-be ABA team to Los Angeles to compete directly with the Lakers. The owners of the Dallas Chaparrals (now the NBA’s San Antonio Spurs) were so confident of the impending merger that they suggested that the ABA hold off on scheduling and playing a regular season schedule for the 1971–72 season.

The first NBA vs. ABA exhibition game was played on September 21, 1971 at Moody Coliseum in Dallas, Texas. The first half was played by NBA rules and the second half by ABA rules, including the red, white and blue basketball and 3-point shot. Kareem Abdul-Jabbar’s NBA Milwaukee Bucks barely squeaked past John Beasley’s ABA Dallas Chaparrals, 106-103.
Down 12 points with 10 minutes to go, Chaps Gene Phillips hit six straight shots in fourth quarter to rally his team. The Chaps went ahead 103-102 with 24 seconds remaining on a pair of free throws from guard Donnie Freeman. With the Chap’s defense collapsing on Jabbar, McCoy McLemore hit a 15-foot jumper with 11 seconds left to give the Bucks a 104-103 lead. The Chaps’ Steve “Snapper” Jones missed a 10-foot baseline jumper with five seconds on the clock. Bucks Lucius Allen made two free throws for the final score. Bucks’ stars Oscar Robertson and Bob Dandridge missed the game. Dandridge was appearing in a Willamsburg Virginia court settling a traffic ticket and Oscar Robertson was in Washington D.C. fighting the merger.

Officially, the litigation was known as “Robertson v. National Basketball Association, 556 F.2d 682 (2d Cir. 1977)”, but it became forever known as the Oscar Robertson suit. Robertson, as president of the NBA Players Association, filed a lawsuit in April of 1970 to prevent the merger on antitrust grounds. Robertson, still smarting from his unexpected trade by his college hometown Cincinnati Royals to the Milwaukee Bucks, sought to block any merger of the NBA with the American Basketball Association, to end the option clause that bound a player to a single NBA team in perpetuity, to end the NBA’s college draft binding a player to one team, and to end restrictions on free agent signings. The suit also sought damages for NBA players for past harm caused by the option clause. The court issued an injunction against any merger thus delaying the ABA-NBA merger.
Robertson himself stated that his main gripe was that clubs basically owned their players: players were forbidden to talk to other clubs once their contract was up, because free agency did not exist back then. In 1972, the U.S. Congress came close to enacting legislation to enable a merger despite the Oscar Robertson suit. In September 1972, a merger bill was reported favorably out of a U.S. Senate committee, but the bill was put together to please the owners, and ended up not pleasing the Senators or the players. The bill subsequently died without coming to a floor vote. When Congress reconvened in 1973, another merger bill was presented to the Senate, but never advanced.

Meantime, the ABA-NBA exhibition games continued. In these ABA vs. NBA exhibition games, the ABA’s RWB ball was used for one half, and the NBA’s traditional brown ball was used in the other half, the ABA’s three-point shot (and 30 second shot clock) was used for one half only, in some games, the ABA’s no-foul out rule was in effect for the entire game and the league hosting the game provided its own referees. NBA refs wore the traditional B&W “zebra” shirts while ABA refs wore shorts matching the ball: red, white & blue. Most of the interleague games were played in ABA arenas because the NBA did not want to showcase (and legitimize) the ABA in front of NBA fans. On the flip side, ABA cities were eager to host NBA teams because they attracted extra fans, made more money, and proved both leagues could compete against each other. Results from those first few years were not highly publicized by either league.
Although they didn’t count for anything except pride, ABA / NBA exhibition games were always intense due to the bad blood between the leagues. During these ultra-competitive games players (including future Hall of Famers Rick Barry and Charlie Scott who played for teams in both leagues) were thrown out with multiple technical fouls. Likewise, Hall of Fame coaches like Larry Brown and Slick Leonard (who coached in both leagues) often ended up listening to interleague games in the locker room after being ejected.
After the 1974-75 regular season, the ABA Champion Kentucky Colonels formally challenged the NBA Champion Golden State Warriors to a “World Series of Basketball,” with a winner-take-all $1 Million purse (collected from anticipated TV revenues). The NBA and the Warriors refused the challenge. Again, after the 1975-76 season, the ABA Champion New York Nets offered to play the NBA Champion Boston Celtics in the same fashion, with the proceeds going to benefit the 1976 United States Olympic team. Predictably, the Celtics declined to participate.
In the later years of the rivalry, buoyed by younger players, better talent and the home court advantage, ABA teams began winning most of the games. Over the last three seasons of the rivalry, the ABA steadily pulled ahead: 15-10 (in 1973), 16-7 (in 1974), and 31-17 (in 1975). The ABA won the overall interleague rivalry, 79 games to 76 and in every matchup of reigning champions from the two leagues, the ABA champion won, including in the final pre-merger season when the Kentucky Colonels defeated the Golden State Warriors, sans $ 1 million dollar purse.
The Oscar Robertson suit would eventually seal the fate of the ABA and for the entirety of its pendency it presented an insurmountable obstacle to the desired merger of the two leagues. The worm was beginning to turn.

Next Week- Part II including details of the April 7, 2018 American Basketball Association Reunion in Indianapolis.