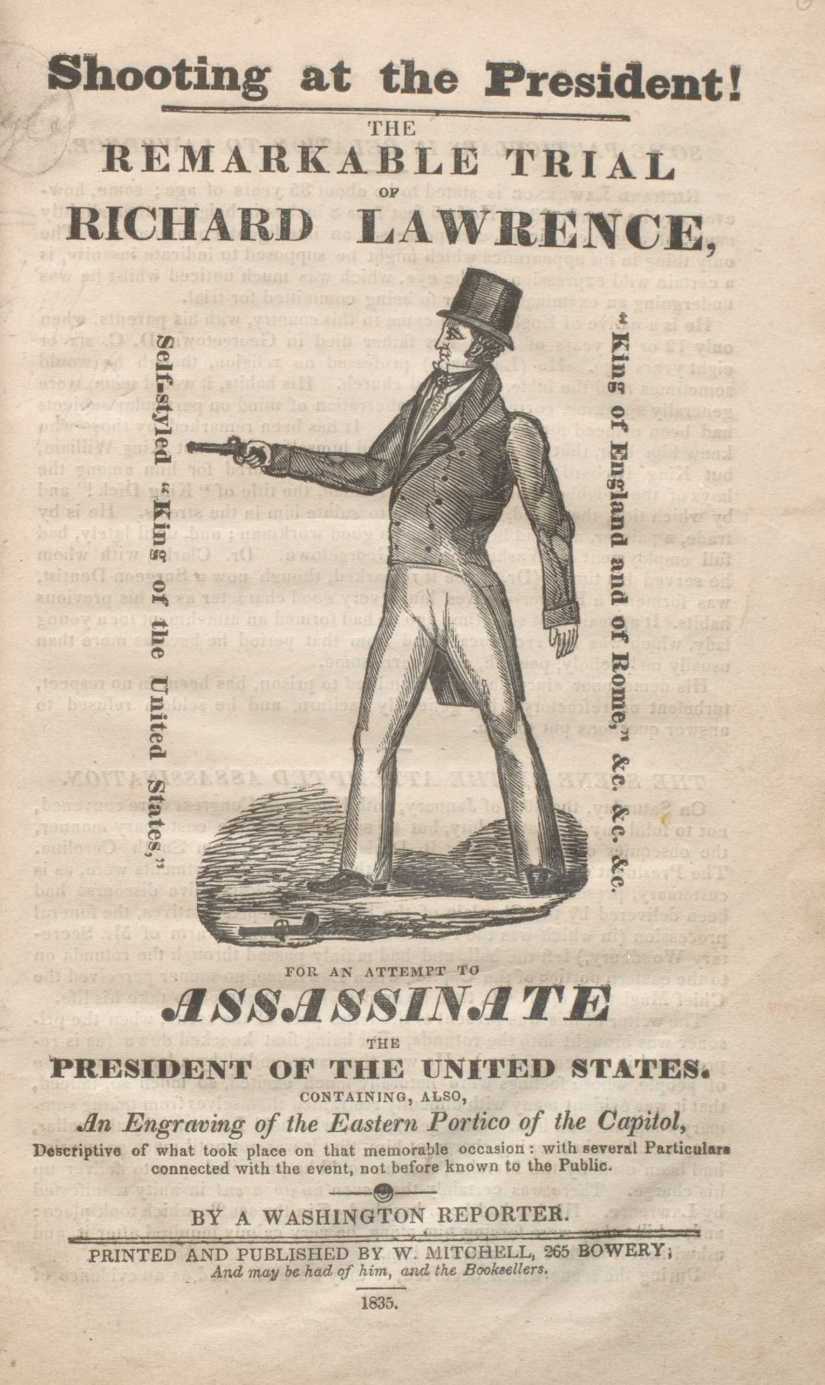 Lawrence was brought to trial on April 11, 1835 at the District of Columbia City Hall. The prosecuting attorney was Francis Scott Key, author ot the Star Spangled Banner. After only five minutes of deliberation, the jury found Lawrence “not guilty by reason of insanity.” In the years following his conviction, Lawrence was held by several institutions and hospitals. In 1855, he was committed to the newly opened Government Hospital for the Insane (later renamed St. Elizabeth’s Hospital) in Washington, D.C. There he remained until his death on June 13, 1861, almost 16 years to the day after his nemesis, Andrew Jackson, died on June 8, 1845.
Strangely enough, not only was Andrew Jackson our country’s first commander in chief to be chased by a nut with a gun, he was also the first president to be attacked physically. A year and a half before Lawrence jumped from behind that pillar to fire upon his president, Jackson ordered the dismissal of Robert B. Randolph from the Navy for embezzlement. On May 6, 1833, Jackson sailed on USS Cygnet to Fredericksburg, Virginia, where he was to lay the cornerstone of a monument near the grave of Mary Ball Washington, George Washington’s mother. During a stopover near Alexandria, Randolph appeared and struck the President, drawing a trickle of blood from the President’s mouth. Jackson was seated behind a table at the time, which no doubt lessened the affect of the attack (for both Jackson and his assailant). Randolph fled the scene chased by several members of Jackson’s party, including the well-known writer Washington Irving. Randolph ended up getting away scot-free when Jackson decided not to press charges.
While the finest doctors in Washington were busy listening to Lawrence’s claim to be the king of England, the police were testing “his majesty’s” misfired pistols. They worked perfectly. Astonished witnesses watched as bullets once intended for the President now plowed through inch-thick wood planks at 30 paces. It was later determined that the weapons Lawrence had chosen were known for being vulnerable to moisture and the weather on that date was extremely humid and damp. A century later, Smithsonian researchers conducted a study of Lawrence’s derringers, during which both guns discharged properly on the test’s first try. It was later determined that the odds of both guns misfiring during the assassination attempt were one in 125,000.
Many of Jackson’s contemporaries believed that Old Hickory had been protected by the same “Divine Providence” that protected the fledgling nation. This national pride was a large part of the Jacksonian cultural myth fueling American “Manifest Destiny” expansion in the 1830s. Senator Thomas Hart Benton, who had also once shot at Jackson himself, reflected that “two pistols-so well loaded, so coolly handled, and which afterward fired with such readiness, force, and precision-missing fire, each in its turn, when leveled eight feet at the President’s heart . . . made a deep impression upon the public feeling, and irresistibly carried many minds to the belief in a superintending Providence.” To many Americans, Jackson’s survival could be nothing but the work of a higher power.

Ironically, after the attack, Jackson returned by carriage to the White House and got back to business immediately. Several concerned citizens rushed to the President only to find him “calm, cool and collected, as if nothing had happened.” Another visitor arrived an hour later to find Jackson bouncing a child playfully on his knee while discussing the incident with General Winfield Scott. That evening, a thunderstorm swept the D.C. area blanketing the Capitol in thunder, lightning and sheets of rain. Conversely, most Washingtonians never realized the storm they had just averted. Had those pistols met their mark, a literal firestorm would have swept our young nation. Eventually, the incident fed the legend that became Old Hickory. Love him or hate him, there are no gray areas with Andrew Jackson. He was a true American original.