I first ran this article in 2009 on the 75th anniversary of an Alcatraz escape attempt by a desperate inmate with ties to fountain square. I thought it might be worth another read. Next week will mark the 84 years since the escape escape attempt. Since the time of my visit, the Island has changed much. The area where the escape attempt occurred, closed to the public back then, is now open to visitors.

Alcatraz Federal Penitentiary opened on August 11, 1934, exactly 75 years ago last week. I visited “The Rock” last Tuesday morning for an exclusive “Behind the Scenes” tour led by arguably the most famous face on the island, Emmy award winning park ranger John Cantwell. If you’ve ever seen a television program on the subject of Alcatraz, Cantwell’s face should be very familiar as he’s appeared in nearly every taped segment made on the island over the last dozen or so years. A Wisconsin native, Cantwell has worked for the National Park Service for almost 20 years having started as a clerk in the Alcatraz book store while still in high school. During his tenure, he has befriended over two dozen former inmates, countless former island residents and more than a dozen former guards, several of whom were like family to Cantwell often staying with John and his wife in their home while visiting the island for reunions and book signings. Sadly, the ranks of these former alumni have dwindled drastically in the last few years to the point that during the official 75th reunion ceremonies, only 5 former inmates and 2 former guards were in attendance.

The subject of my visit was a young man by the name of James A. Boarman, an Indianapolis bank robber with eastside ties who served two and one half years on “The Rock” from 1940 to 1943. James Arnold Boarman was born on November 3, 1919 in Whalen, Kentucky, the sixth of eight children. His father was a carpenter who died of an accidental drowning when James was only seven years old. His mother moved her brood to Indianapolis where all 9 family members shared residence in a small apartment on the cities’ southeast side. Young Jimmy Boarman attended St. Patrick’s Catholic School in Fountain Square until dropping out at age 14 when he got a job as a gardener to help support the family. His mother recalled that he was a “good boy” who didn’t mind turning his earnings over to her to help support the impoverished family.
At the age of 16, Jimmy was arrested for stealing an automobile, placed on probation and released to the custody of his sickly mother. However, he quickly stole two more cars (one in Indianapolis and another in Oklahoma) and, with two accomplices, headed to California where the trio was quickly apprehended. Unbeknownst to James, with this crime, he had graduated from a small time car thief to an enemy of the Federal Government by transporting a stolen car across state lines. His mother traveled west to plead for mercy for her son to no avail as James was sentenced to three years in Federal Prison in El Reno, Oklahoma. Boarman quickly became involved in several escape attempts and was considered such a high flight risk that he was transferred to the more secure facility at Lewisburg less than a year after arriving in the Sooner state. Unrepentant, James continued to fight, plot escape and hoard weapons until his release right up to his release in Christmas of 1939.
James headed back to Indianapolis and tried to “go straight” by getting a job at the RCA plant on Sherman Avenue. A series of layoffs and rehires pushed Boarman back into a life of crime. James was later quoted as saying: “When I came out of Lewisburg, I intended to go straight. I got me a job and did go straight. I lost that job, and couldn’t find another one for hell. I tried to join the Army, the Navy, and the Marine Corps and didn’t get in, so I went and got me a gun and started robbin’.” A sympathetic parole officer attempted to help Boarman in his quest to join the military by contacting recruiters directly, but the armed forces representatives felt that James’ past criminal conduct made him an unsuitable prospect for military induction. In August of 1940, James began what would be his last crime spree by stealing a car a gunpoint from an Indianapolis auto dealer and robbing the “Fletcher Trust Company” bank of $ 12,812 in cash. He was quickly arrested in Frankfort, Ky. after drawing attention to himself by spending over $1,000 of the stolen cash on a new car, firearms and several suits of flashy clothing.
When questioned by police, Boarman proudly claimed that while in town, he had amused himself by holding up several gas stations, grocery stores and “two ladies in a parking lot.” His F.B.I. report describes James as a “vicious menace to society… a highly unstable and impulsive youth…quite proud of the fact that he committed the instant offense without the aid or advice of others…He is convinced that he is entirely capable of whipping the whole world.” Sentenced to 20 years in Federal prison, true to form, James would again attempt escape while enroute back to Lewisburg by violently kicking the back of the driver’s seat of the police car transporting him, causing the car to veer off the road into a ditch. James struggled in a vain attempt to wrest the revolver away from the officer earning instead a one way ticket to Alcatraz, arriving 2 days before Halloween of 1940.
Boarman was a “Con’s Con”, generally well liked by his fellow inmates and always on the lookout for a viable escape plan. Ironically, Boarman would hatch his plan for freedom in early 1943 while working in the Island’s mat shop manufacturing cement ballast blocks for submarine nets used by the military during the war, the very same military that denied him employment as a citizen before his incarceration. Boarman, along with three other inmates, Harold Brest, Fred Hunter and Floyd Hamilton, would plan their escape for April of 1943. Brest was a kidnapper and bank robber destined to serve two separate stretches on the rock, Hunter was a member of the Ma Barker / Creepy Karpis kidnapping and robbery gang who made it to the F.B.I.’s legendary “Public Enemy” list, and Hamilton was one of the most famous men on Alcatraz at the time, a bank robber intimately linked to the famed 1930s outlaw couple “Bonnie & Clyde” and former “Public Enemy # 1” on the F.B.I. most wanted list of 1938. The four inmates planned their escape carefully and by April fool’s day were ready to go. However, Hoosier James Boarman insisted that they wait until the time and conditions were perfect for them to “Do the Houdini” and escape. 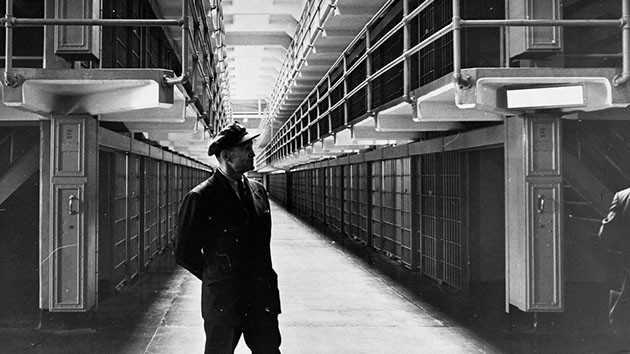 Tuesday April 13, 1945 dawned unusually cold with a dense layer of fog blanketing Alcatraz Island. The four convicts walked nervously down the narrow gravel road that led from the cell house to the mat shop located in the old “Model Industries Building” on the far northwest corner of the island. The building was built by the U.S. Military in the years that Alcatraz served as a disciplinary barracks before the Federal prison arrived in 1934 and as such was filled with many hidden corners and blind angles, not to mention a design flaw that seemingly allowed the back corner walls to drop directly into San Francisco Bay. The inmates had previously cut through the steel mesh covering the windows in preparation for their big moment. At 10:00 am, they made their move.
One of the guards, Custodial Officer George Smith, was overpowered by Hamilton, quickly tied up, gagged and dragged into a back room just as the Captain of the Guards, Henry Weinhold, a former Marine that the inmates called “Bullethead”, rounded the corner. James Boarman, armed with a knife and a hammer, began to beat the massive officer repeatedly with the heavy carpenter’s tool until finally subduing and tying him up to join his fellow guard now lying helpless on the floor. The inmates pushed the metal bars off the window and placed a cloth covered wooden ramp over the barbed wire fence located just a few feet from the window. The fugitive foursome then scooted carefully across the makeshift bridge and dropped to the narrow ledge below. The desperadoes, clad only in their underwear and leather belts, miraculously escaped grave injury during their bare-footed 30-foot plunge down a sheer cliff to the rock-strewn shore below. The quartet brought with them two empty cans designed to keep them afloat in the bay, each stuffed with stolen Army uniforms with which they hoped to make good their escape. Keep in mind that 1943 was the height of World War II and the shores of San Francisco Bay were lined with Army units and defense gun crews as well as being a major debarkation point for U.S. soldiers heading off to war in the Pacific theatre. Armed with the false confidence of their makeshift flotation devices and oblivious to the fact that they were surrounded by enough guns to fill an armory, the quartet hit the water.

7 thoughts on “The Indiana Alcatraz Connection PART I”